Today our Projects Wanted post brings three projects signed by the Barcelona Architecture office Pepe Gascón Arquitectura. After publishing two other projects (Barbacoa House and The Fabric) we decided to put together more than one project into a special post: the residencial project Marquee in Gavà, the school project Saint Miquel School and the public space project Squares in Puigcerdà.

"In a single-family house we have constructed a marquee for sun protection in the hottest months of the year, thus extending the living-room connected to the outdoor garden.

Taking a look at the volumetry of the existing house we think that the result of our intervention should blend in and remain as unnoticeable as possible. In order to achieve that we have agreed to construct a very neutral and discreet marquee in terms of shape and appearance, which in no way will out-shine the already existing structure.

Finally, we have created an L-shpaed marquee parallel to the ground and bending to it at one end, thus forming an inviting portal outlining the passage from the house entrance to the garden.

The entire marquee is constructed using dry technology (polymethyl translucent plates supported on rolling steel structure), as opposed to the existing house that is built with concrete and brick covered with stone. The translucent polymethacrylate is chosen for its neutral image and the visual lightness it offers, as well as its role as sunscreen.

At night the entire structure is illuminated by LED’s which transform it into a light portal." 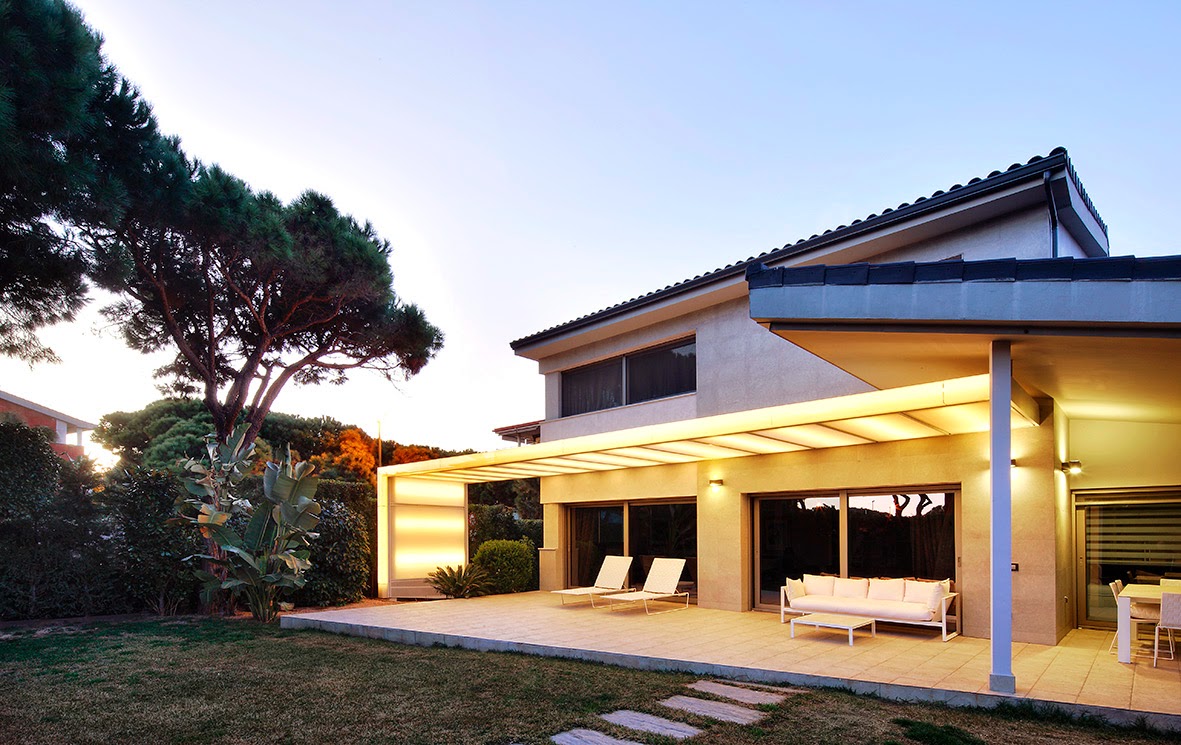 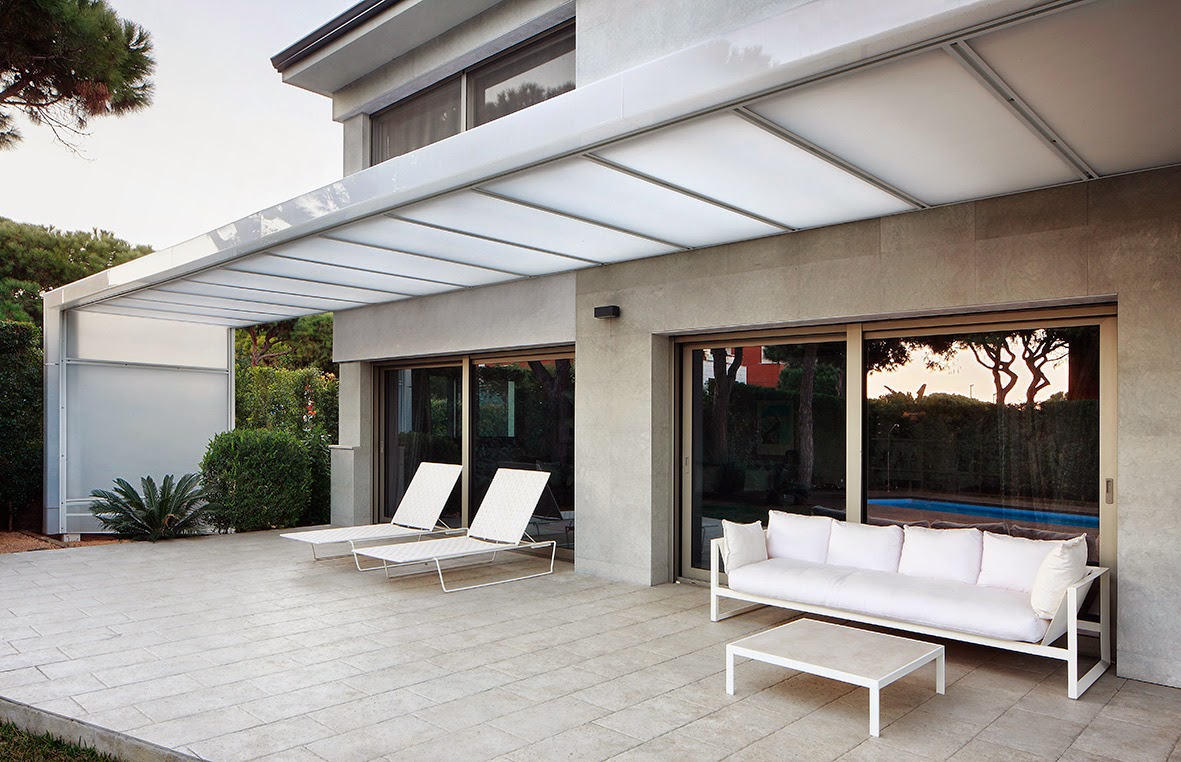 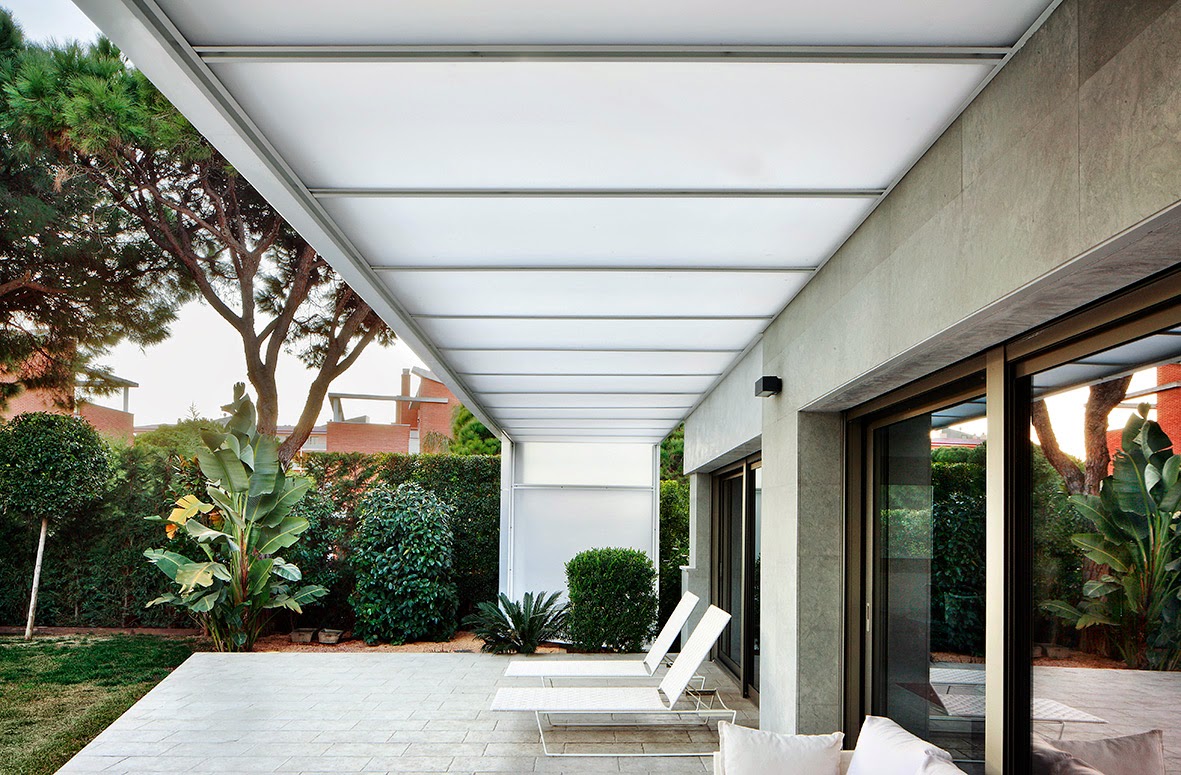 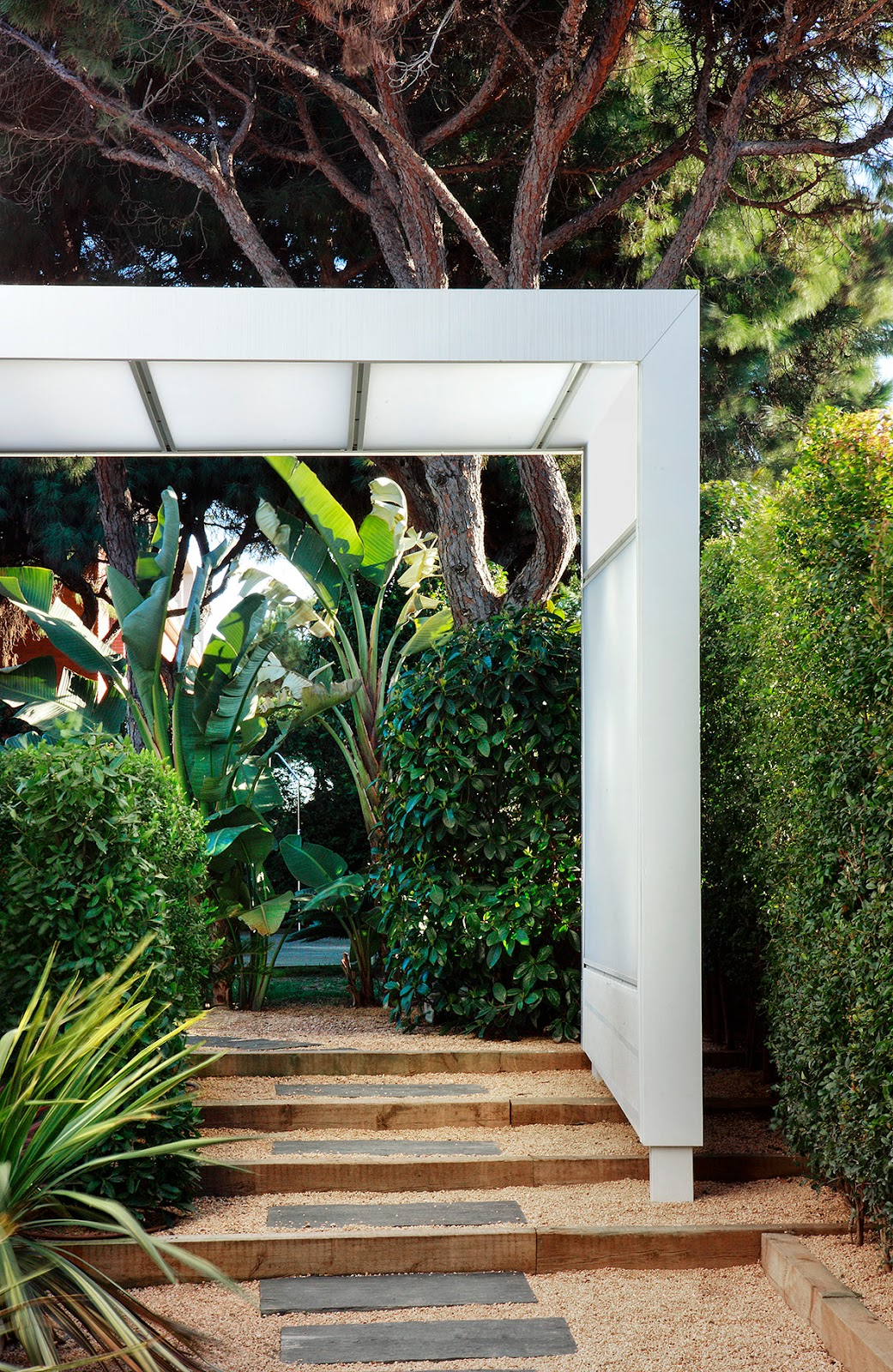 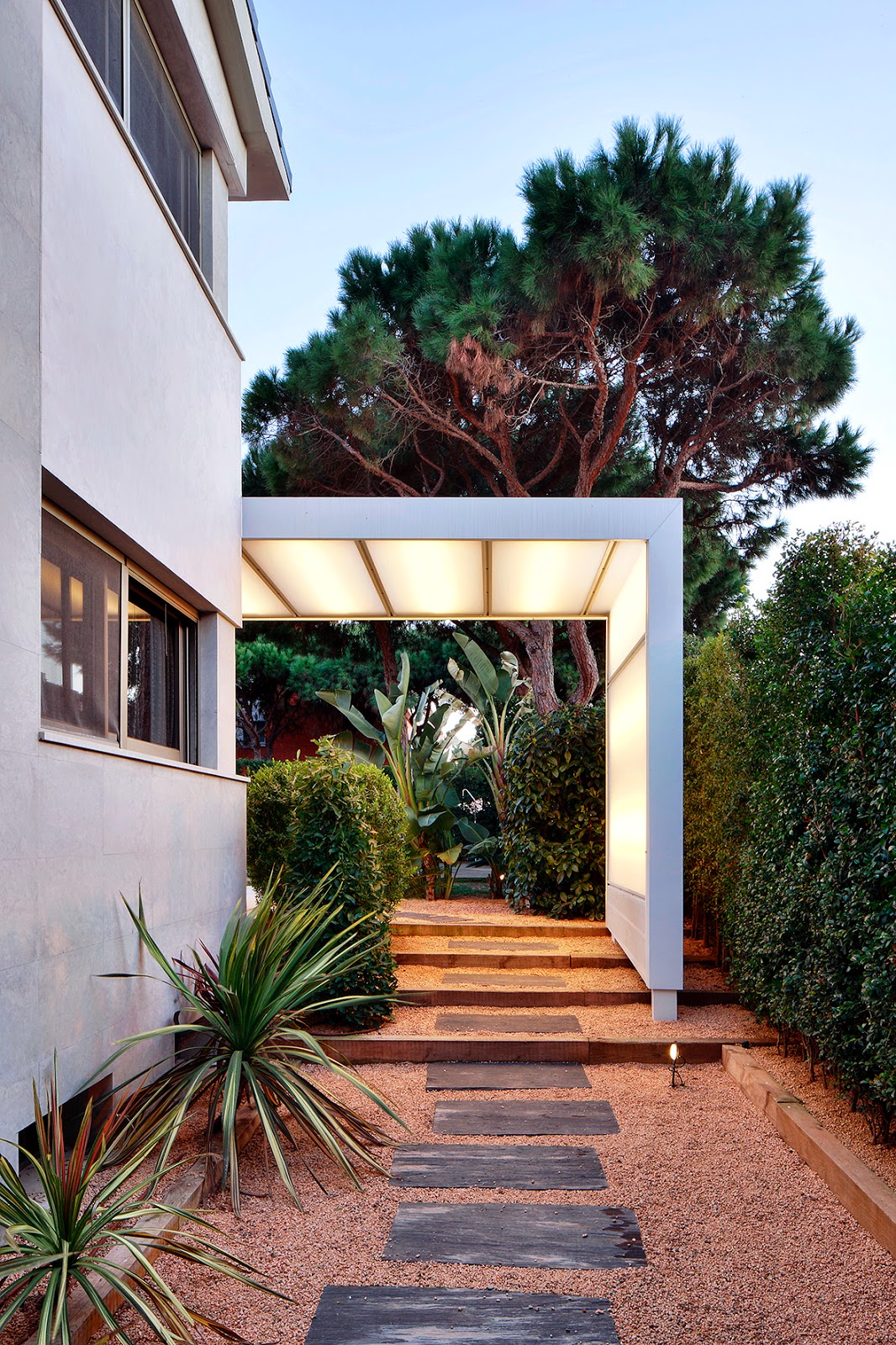 "Apart from its mere built container, a school is nothing more than a place where teaching and learning take place. This project, therefore, reflects the desire to interact with the city, revealing the flows and activities that occur within the immediate environment of the site. Moreover, this school converges with the work of the Xamfrà Sant Miquel Foundation, which is devoted to preparing young people from 16 to 20 years with mild mental disabilities for integration into employment: we are committed to integrating its pupils into society and work so that they form part of the social fabric.

In view of this goal of generating relations, the structure of the new building is resolved by a rhythmic sequence of slender perimeter ribs, which line the building front. This solution creates better-lighted, more open and highly versatile spaces. However, above all, it generates a front that is permeable in both directions: from the school towards the city, and from the city to the interior spaces.

Moreover, in the existing building that formerly housed the old stables, the original windows over the front are bricked over, though slightly sunken in order to conserve the historic memory of this element. The new rectangular openings that are installed, and are in contrast with the old windows, frame the urban landscape almost in the manner of a painting by Antonio López.

The project employs volumetric force to resolve the complex, irregular geometry of the site. For instance, a triangular volume, with ground floor and basement, adjoins the north side (providing optimal lighting for study), whilst the rectangle of the existing building occupies the east corner. The triangular extension is lowrise in order to minimise the environmental impact of new works. Finally, a courtyard provides the rooms in the basement with natural light and ventilation.

All routes through the common zones in the school (stairs, landings, corridors and vestibules) are designed to become “places of social attraction” – spaces for encounters, meetings and exchanges, generously proportioned, enjoying natural lighting and, always, open to the city as backdrop.

In order to frame views of the city itself, the perimeter structure is painted black, like a picture frame, whilst the interior finishes are given austere, light colours. It will be the future users, therefore, whose presence imbues the school with life and colour, leaving the architecture as a neutral, yet orderly, frame for the students and teachers.

In short, all the decisions taken to define the project seek to further these rich and subtle relations between the interior and the exterior. The solutions include, for example, the design of the steel net “non-fence”, the patterned front, the light-filled common spaces, the new windows over the existing building and the longitudinal skylight that provides the overall architecture for communications. All these solutions are aimed particularly at generating relations between the inhabitants and the immediate landscape of the city, precisely so that this place can become a space for teaching and learning." 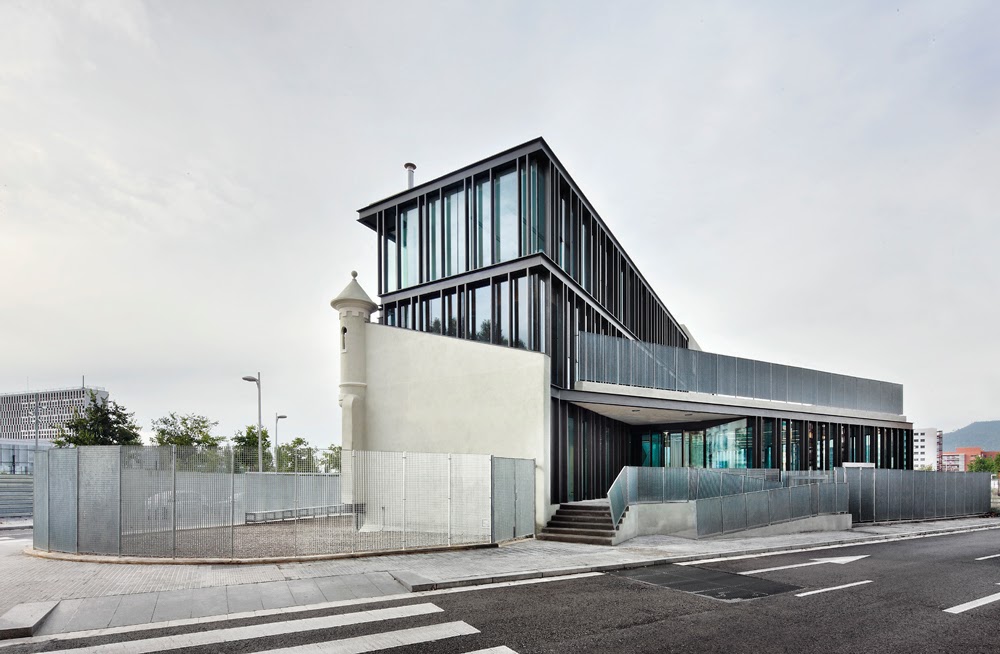 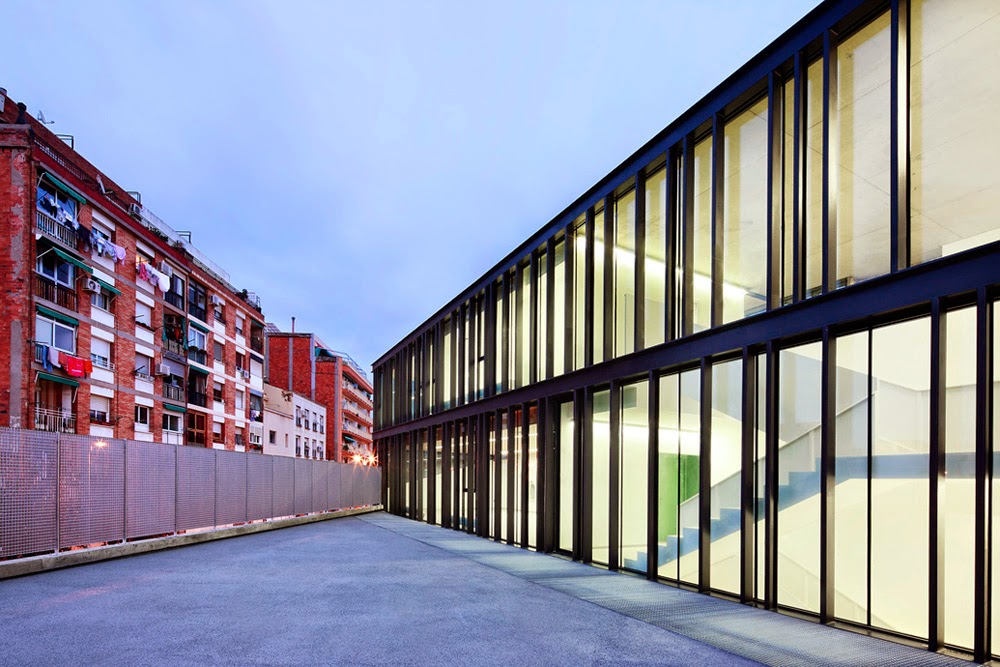 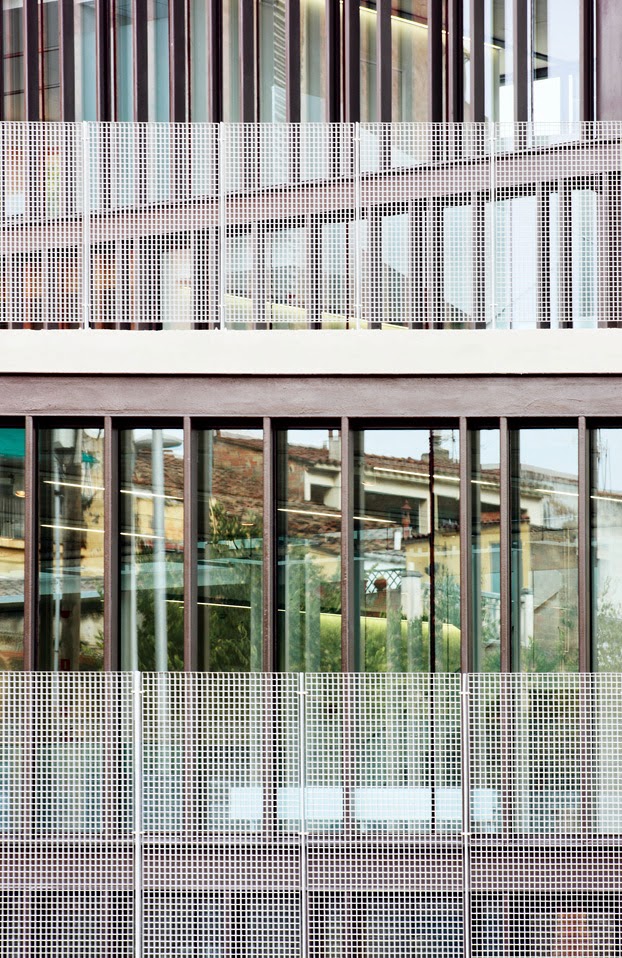 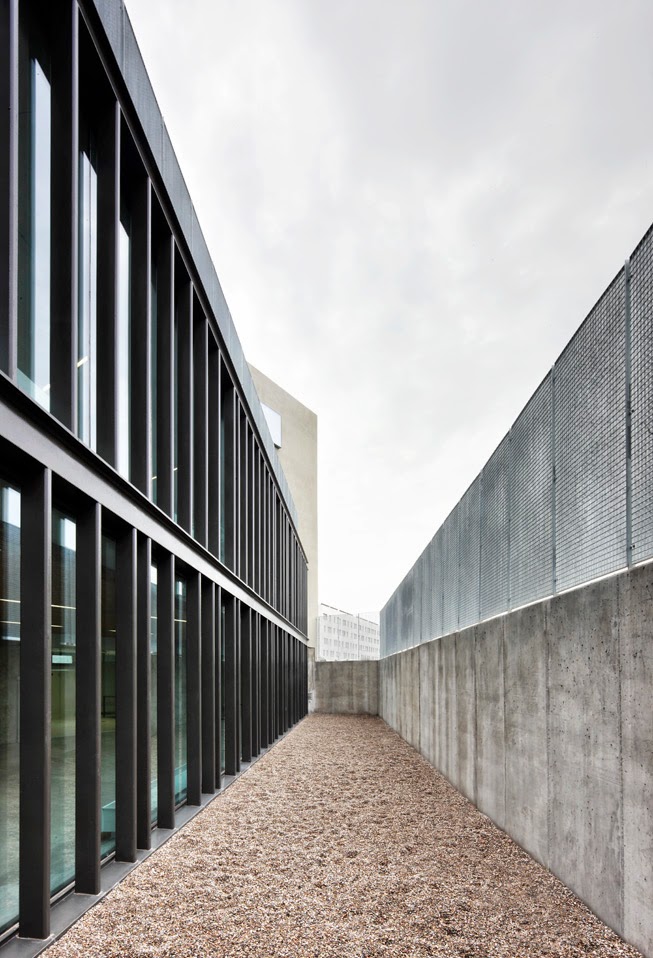 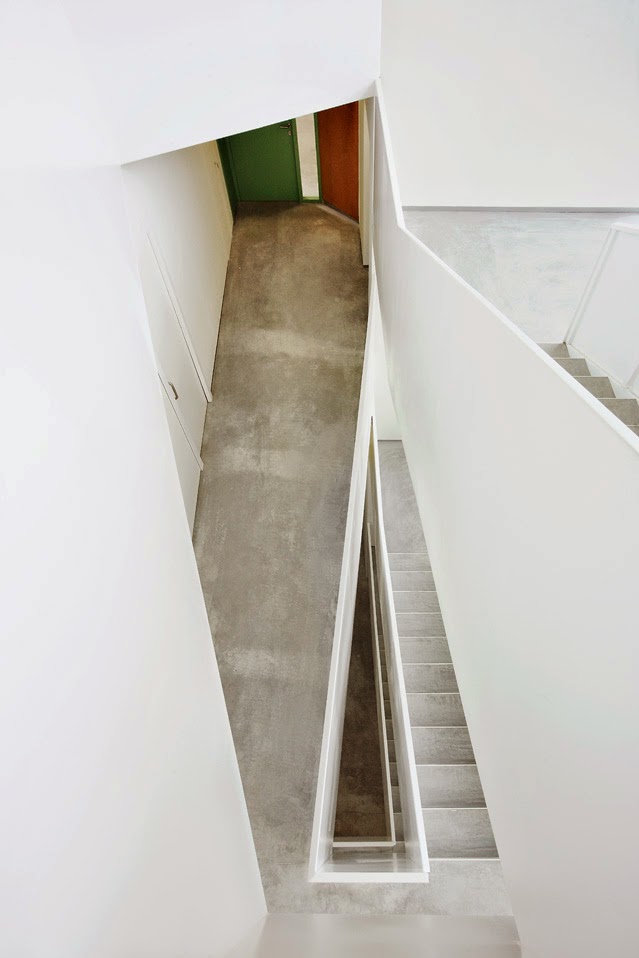 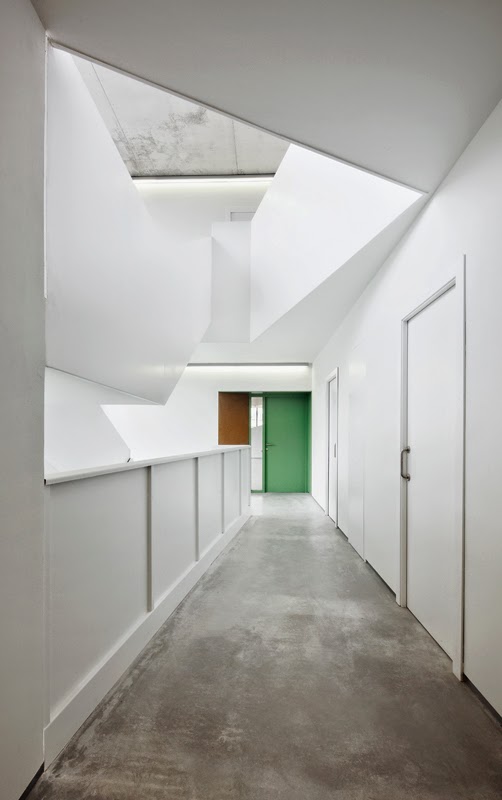 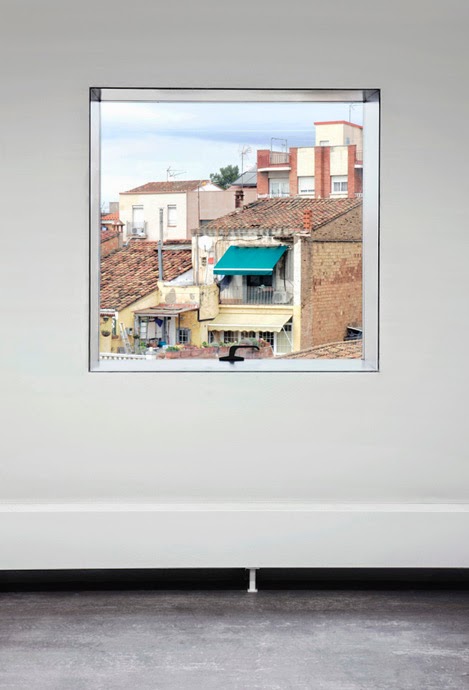 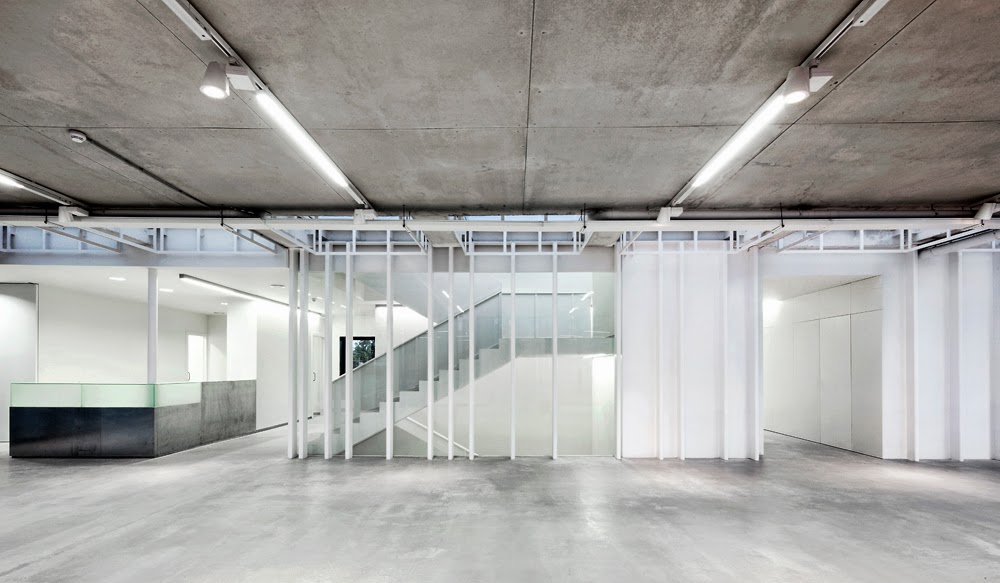 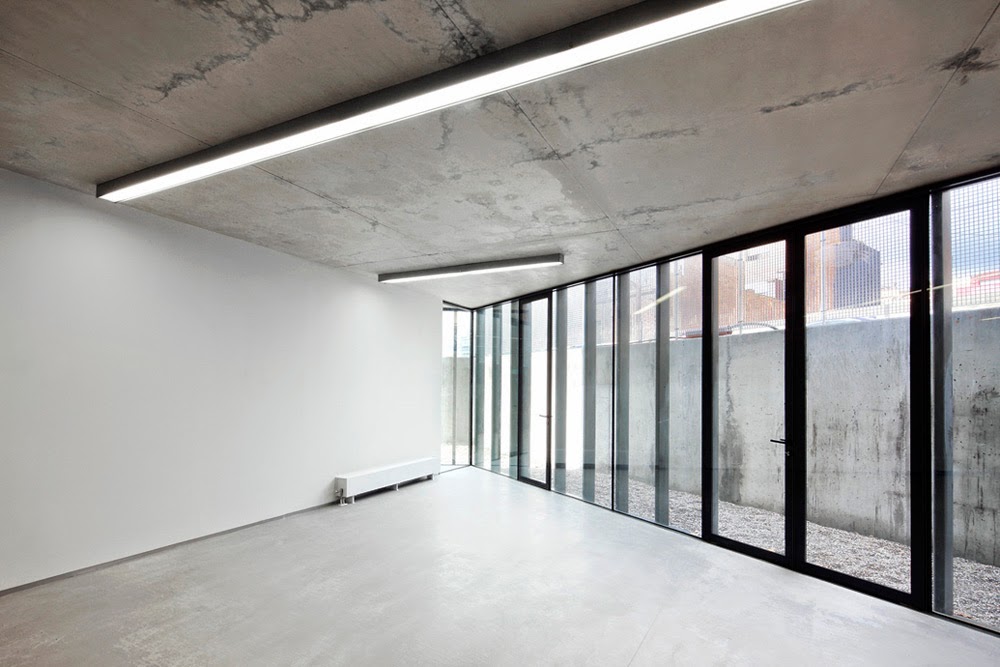 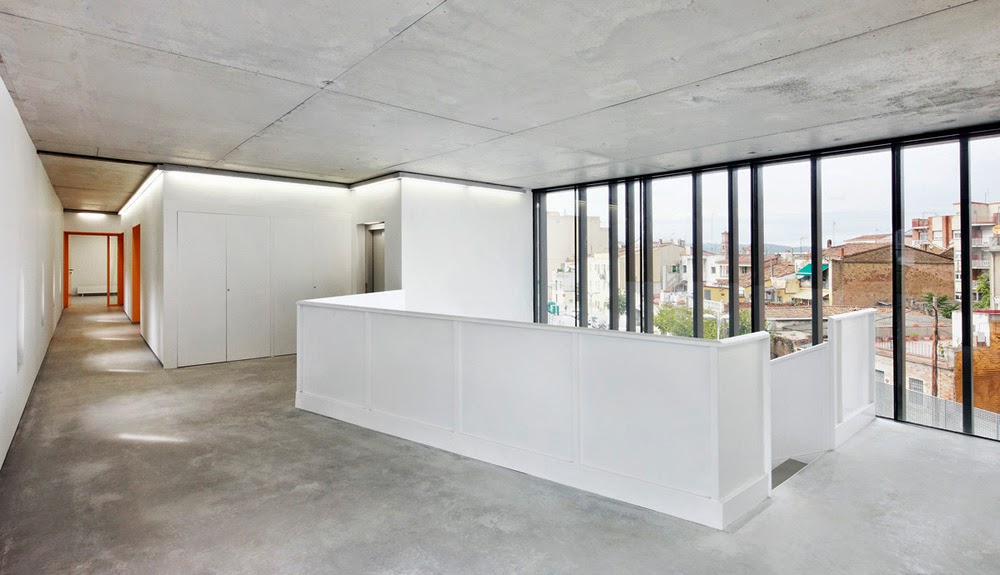 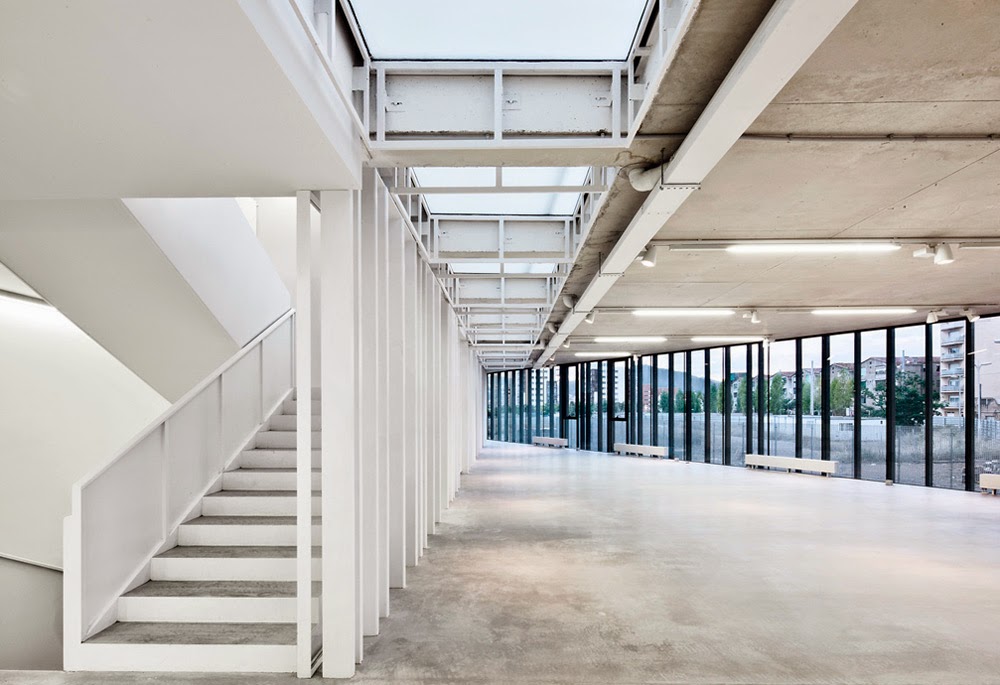 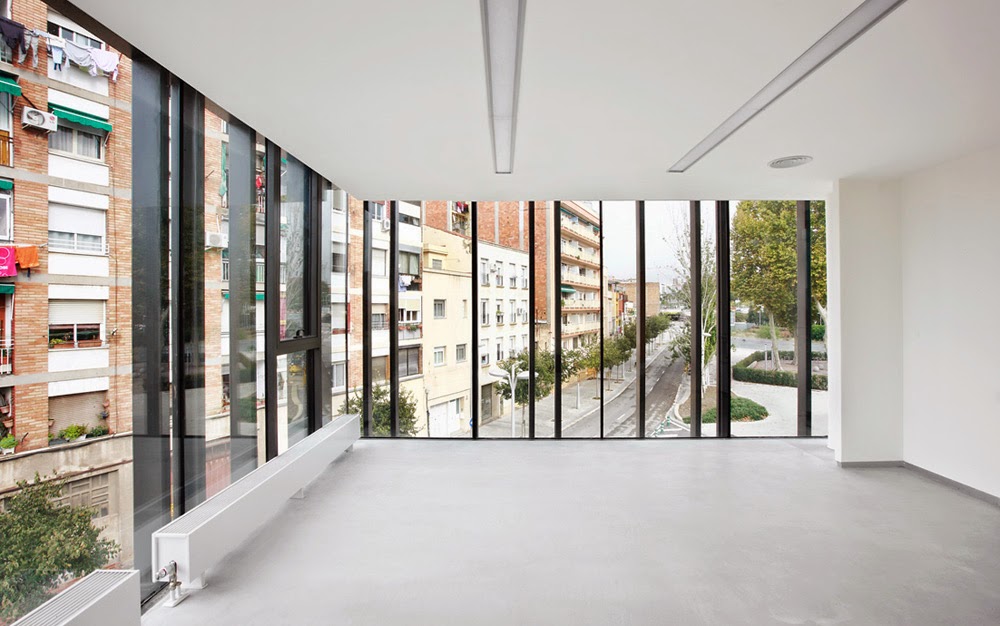 "Remodelling of the most central and relevant public space in Puigcerdà, originally very much deteriorated, with an excessive amount of traffic that diminished the civic and integrating potential of the space.

The first step was to remove vehicular traffic by concentrating all the road connections and services on the south-east side of the squares, thereby freeing up a generously expansive central space for citizens’ use.

The work had to be conducted at ground level due to the existence of an old cemetery, which prompted the design of two large beds for plants running lengthwise – each of them dubbed a ‘natural meander’, the project’s motto – and slightly raised so that they could be filled with sufficient earth for planting trees in.

Between them, they create a long urban feature that both protects the area from the hustle and bustle of the traffic-bearing road and acts as a filter between them, while emphasising the physical and visual border of the squares themselves.

Each stretch of the meander folds back on itself, embracing distinctive spots, such as the array of benches positioned so that people can sit in the shade and enjoy the view into the square. Other areas include the various underground bins and banks for recycled waste and the loading and unloading parking places on the outer edge of the square.

The continuity of the meander is interrupted by transverse side entrances that facilitate access to the squares and connect them with their immediate surroundings.

The space, which is very irregular in shape and which has a strongly marked perimeter, is geometrically structured and arranged through the use of a single material for the paving (granite) throughout the squares, the various areas within them being distinguished by distinctive formats:

All the lighting elements and street furniture are arranged in accordance with the lines established by the stretch of paving.

It results in a public space that is open in character and hence allows for flexibility. The harmonious integration of the squares is achieved through simplicity, coherence and formal essentiality.

The squares are now seen as a properly appointed place that encourages people to enjoy a quiet moment and to meet up with others; a peaceful space that allows the architecture of their surroundings to speak, the choir of traditional buildings that serve as their backdrop." 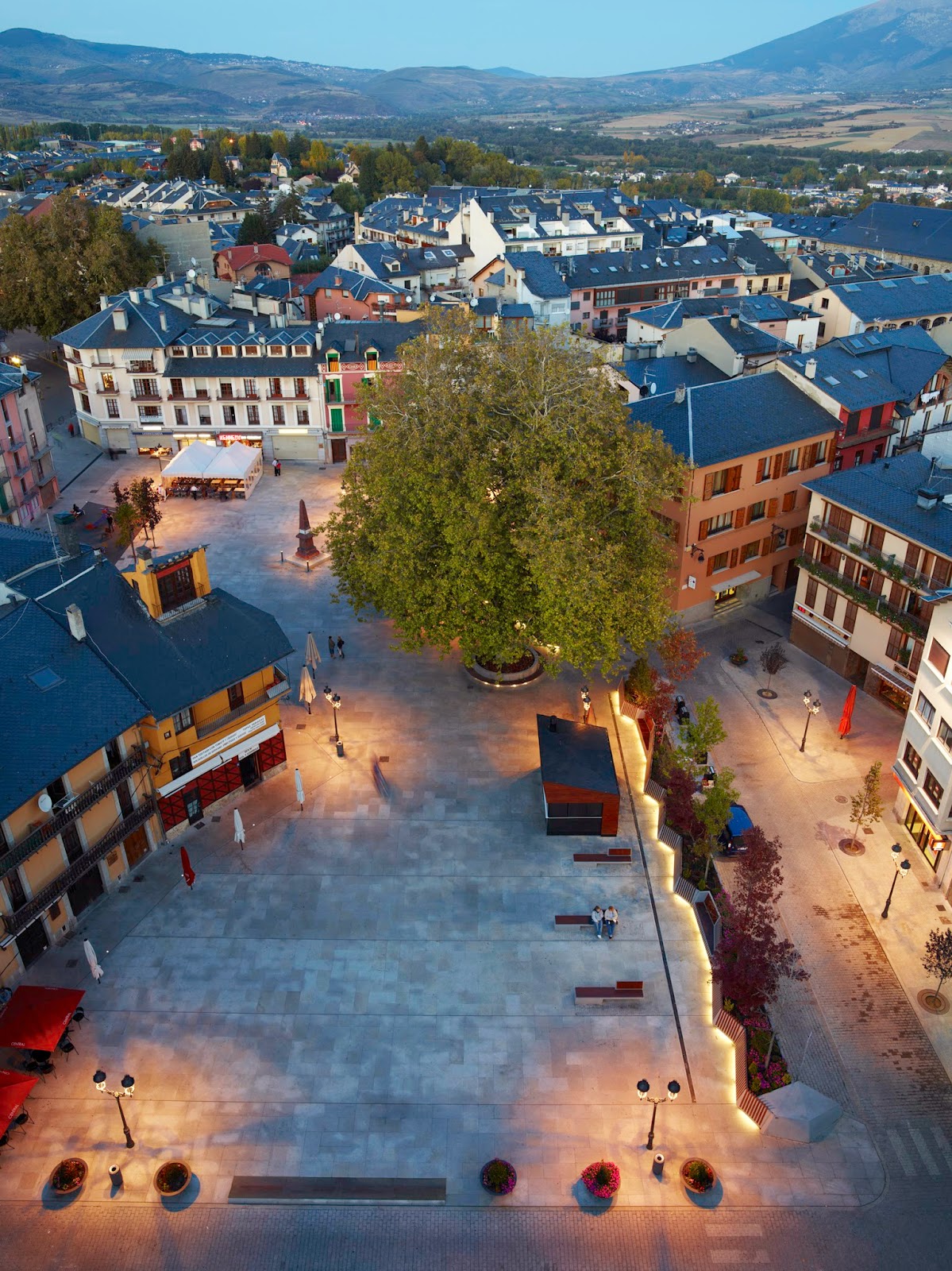 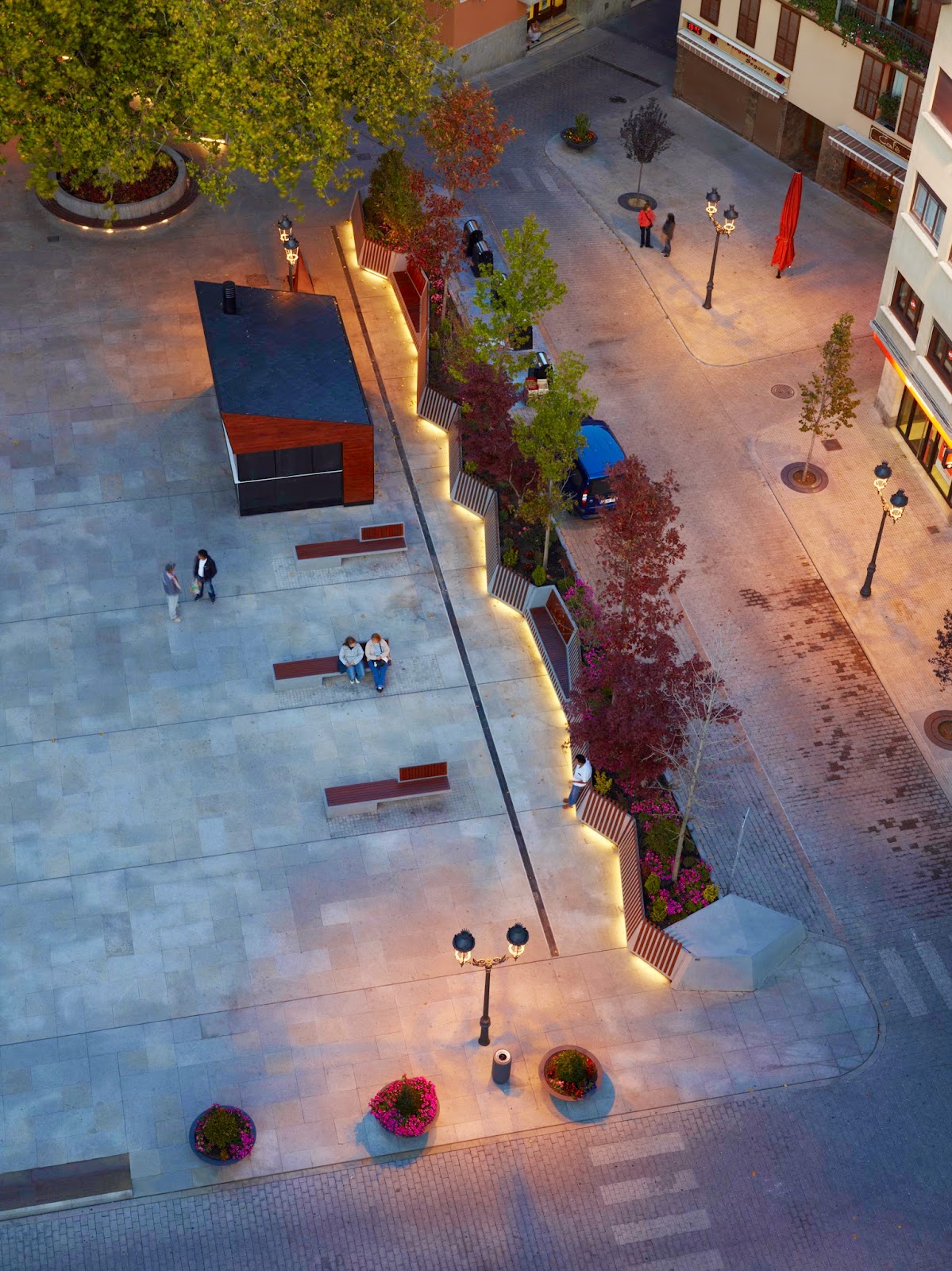 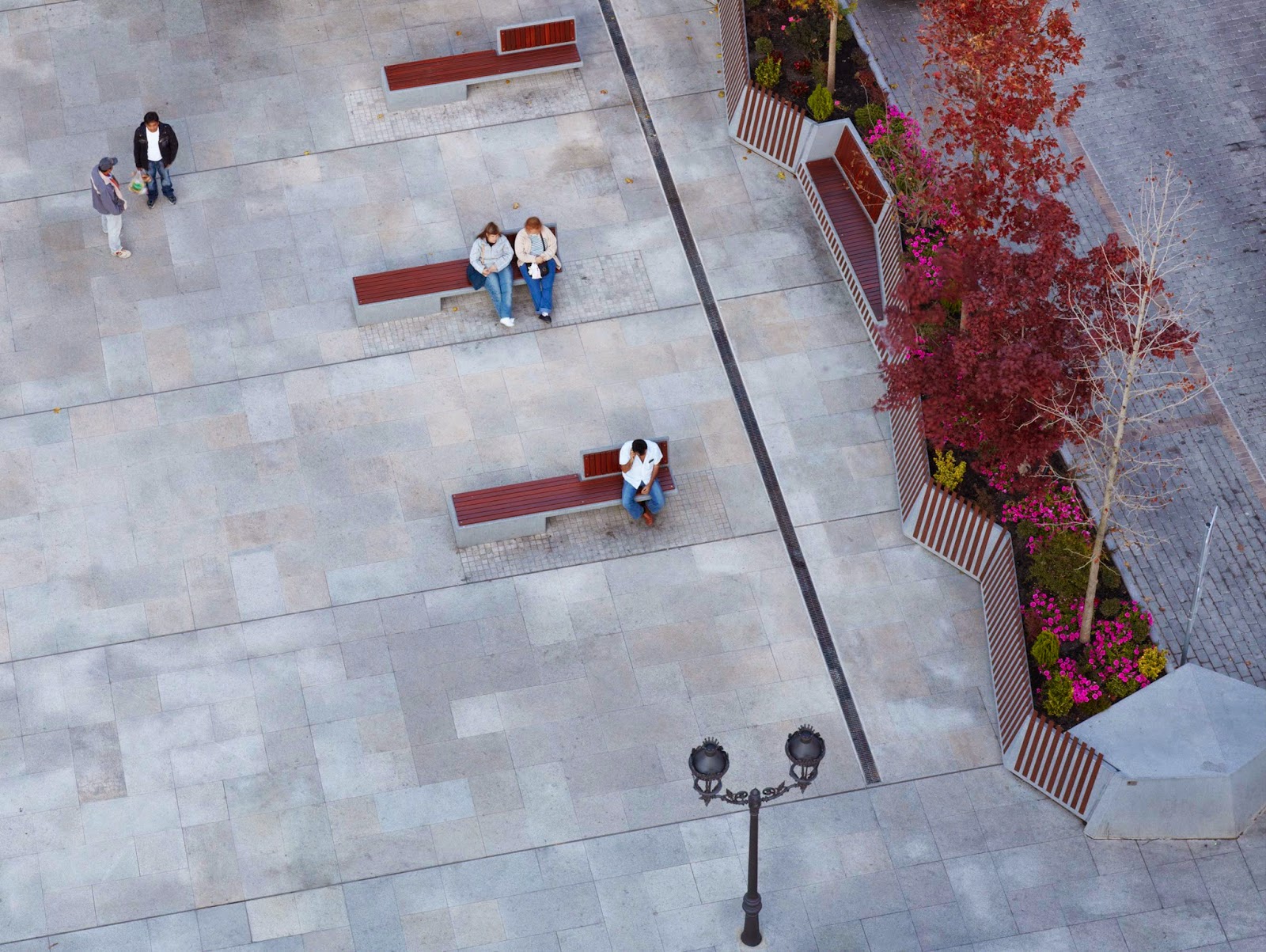 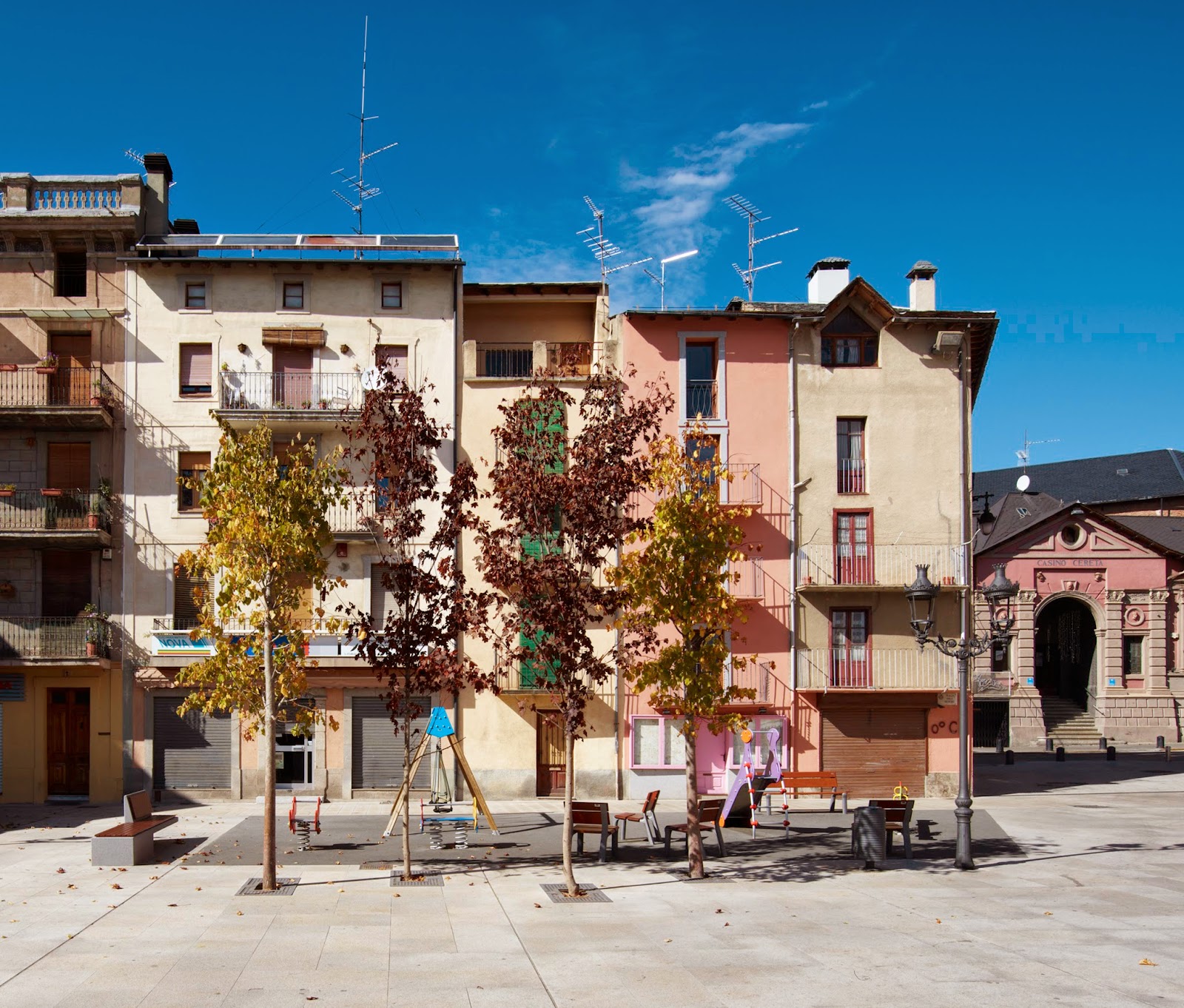 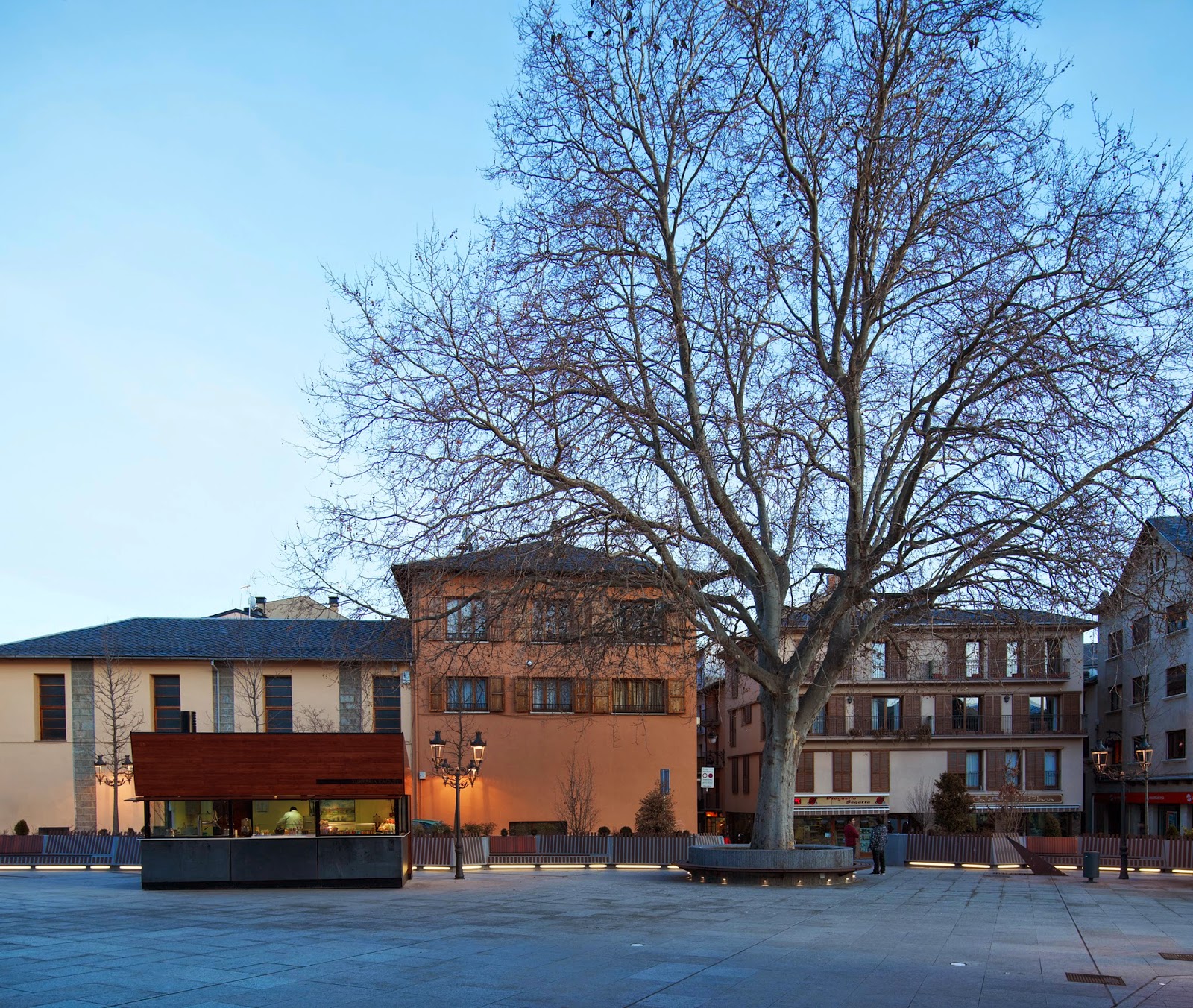 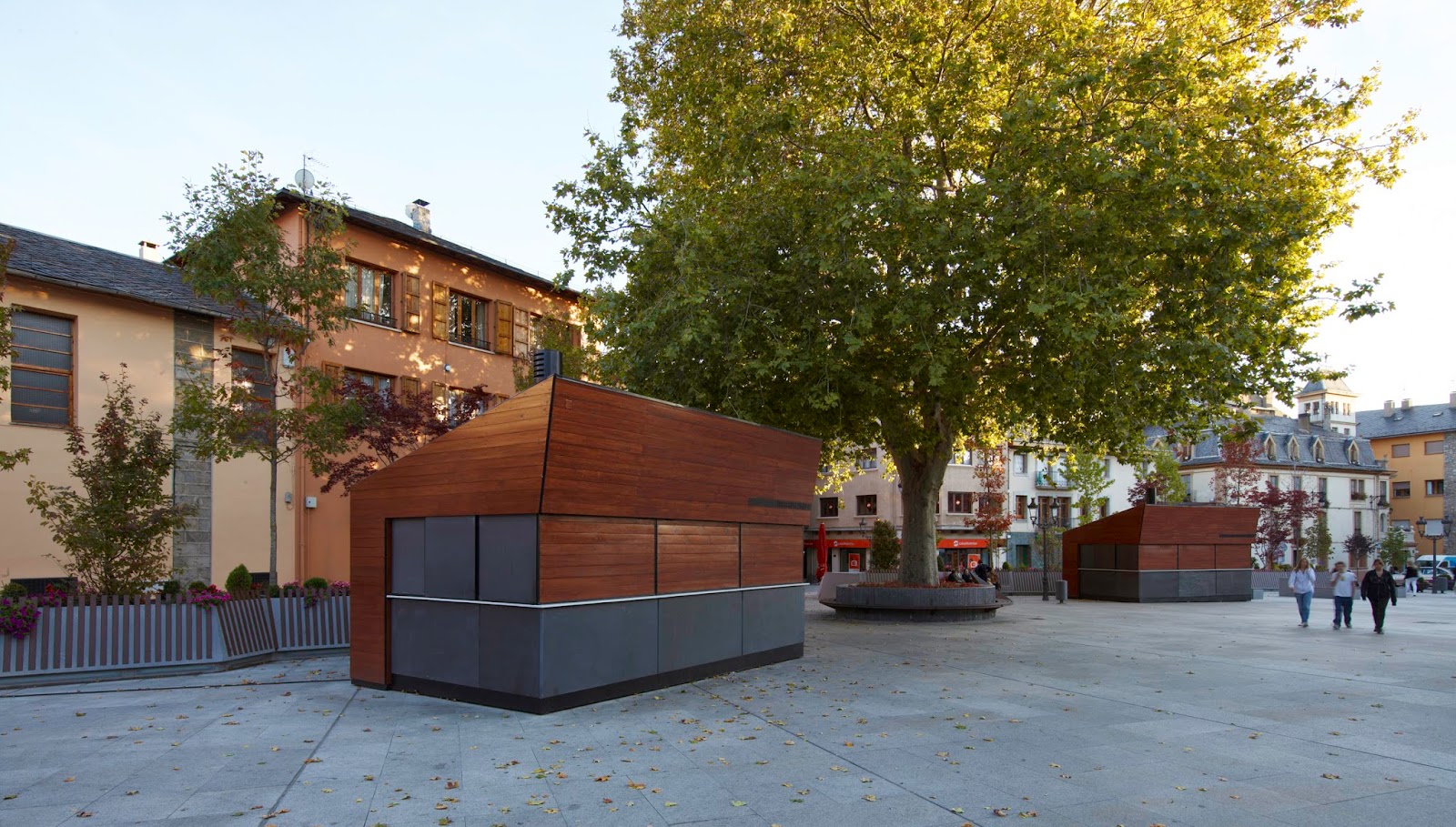 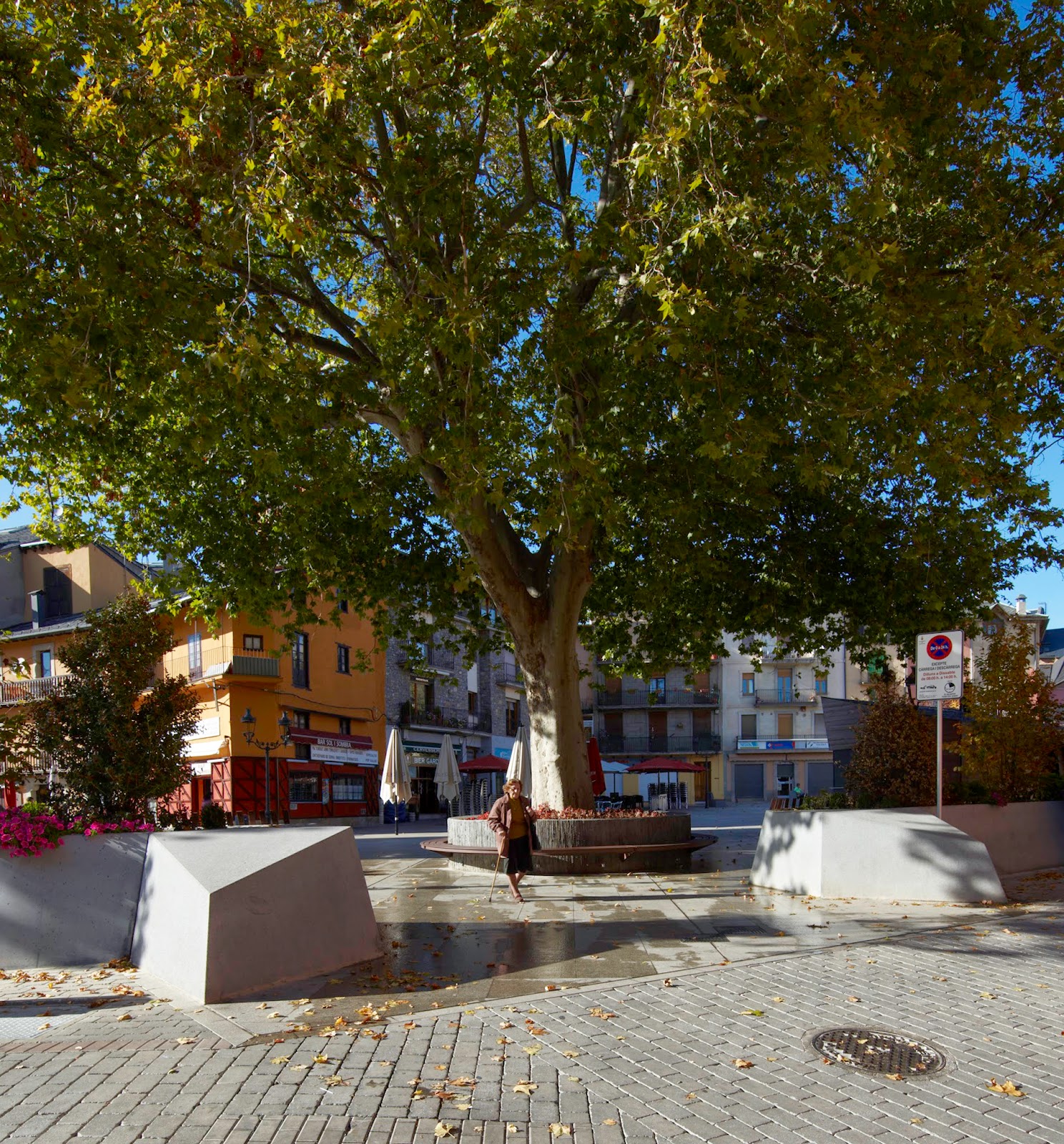 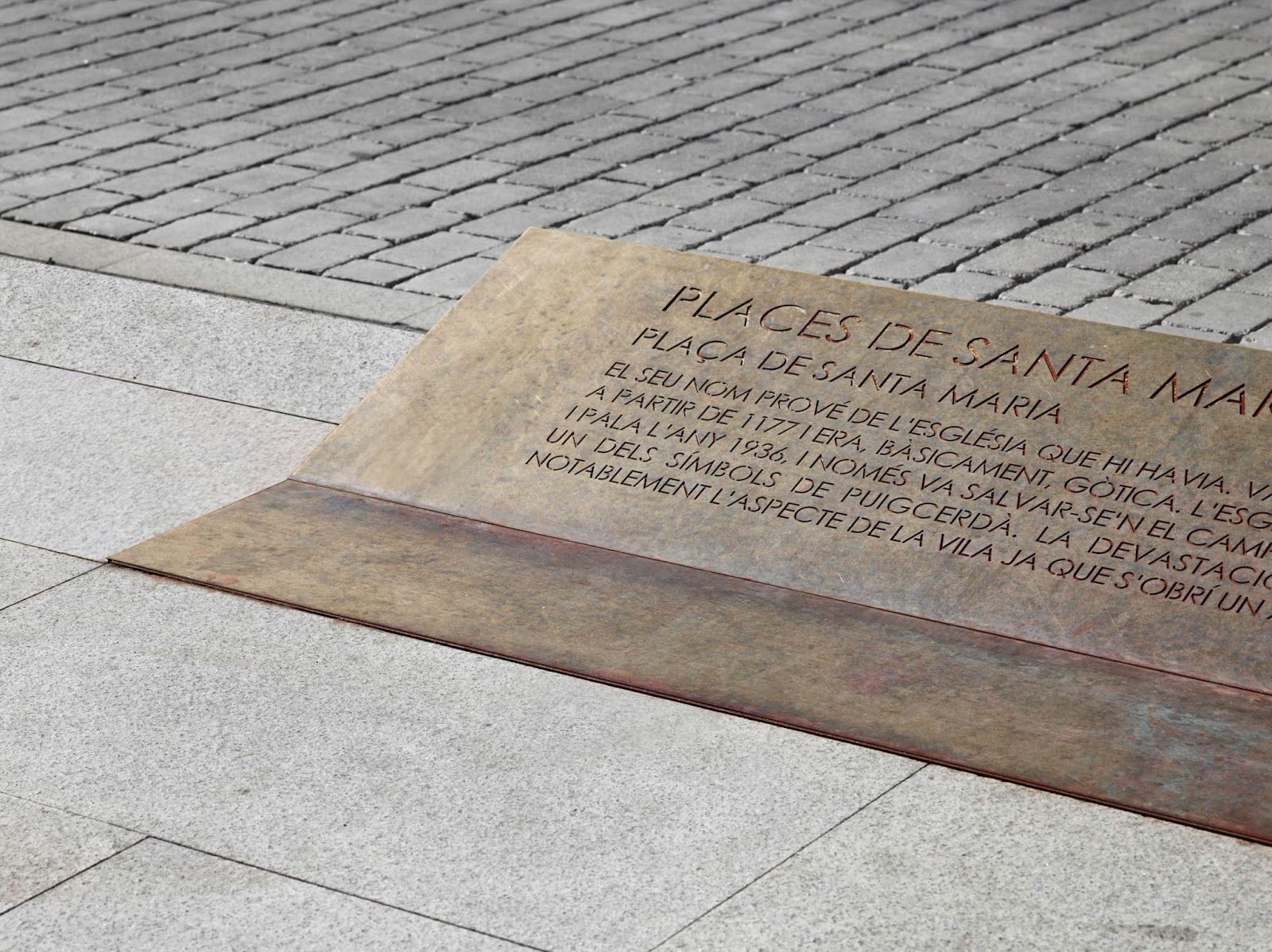 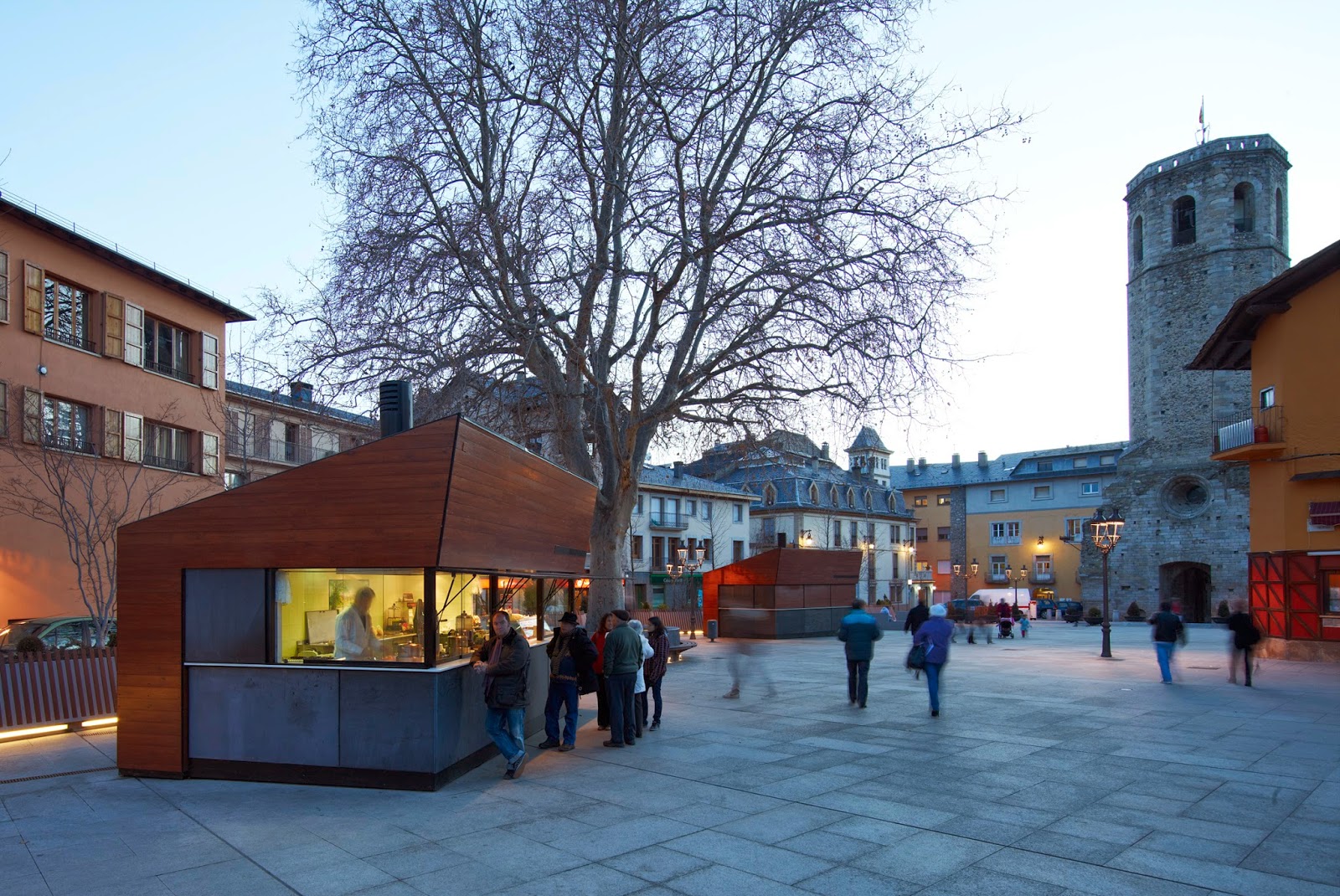 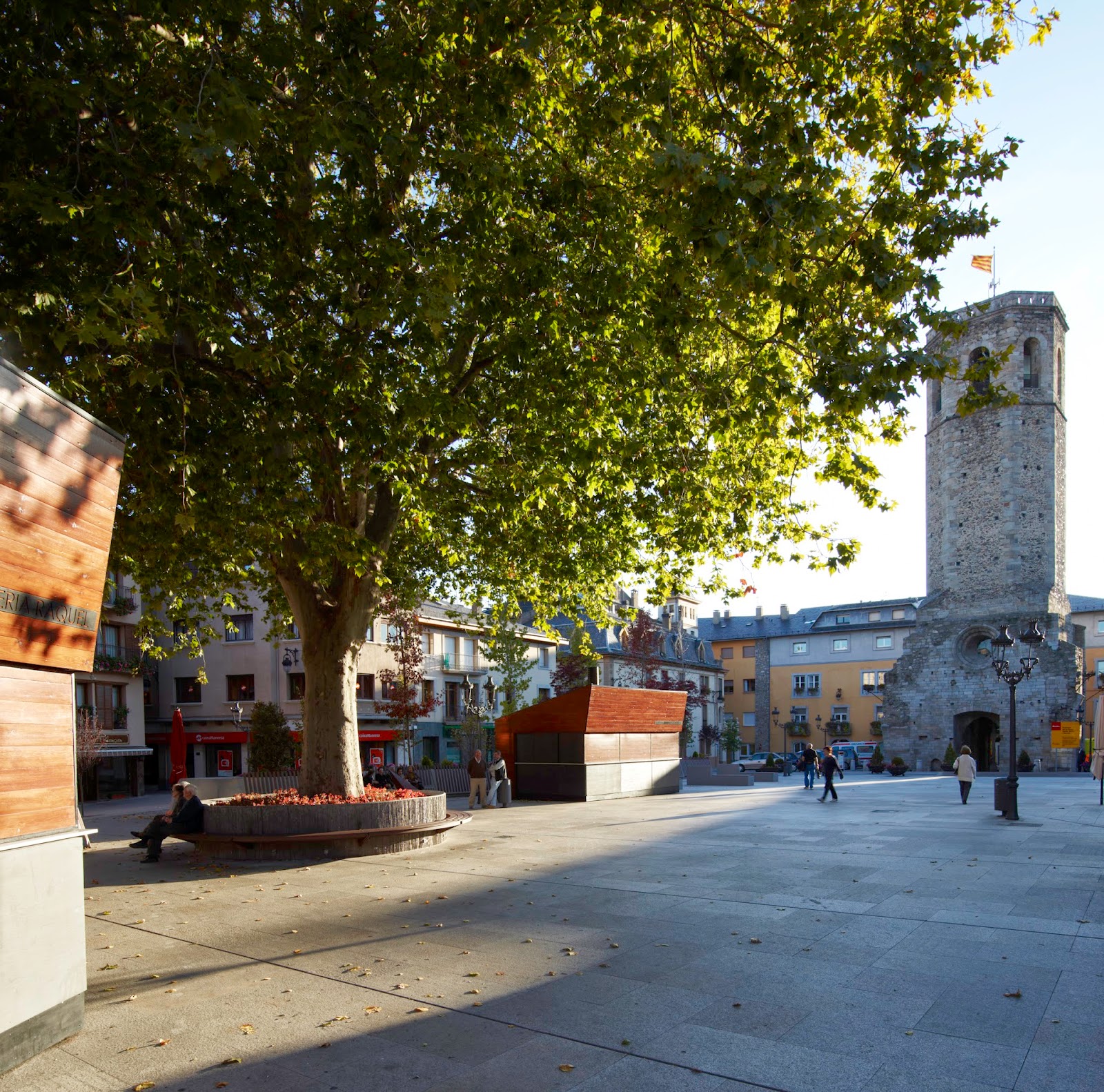 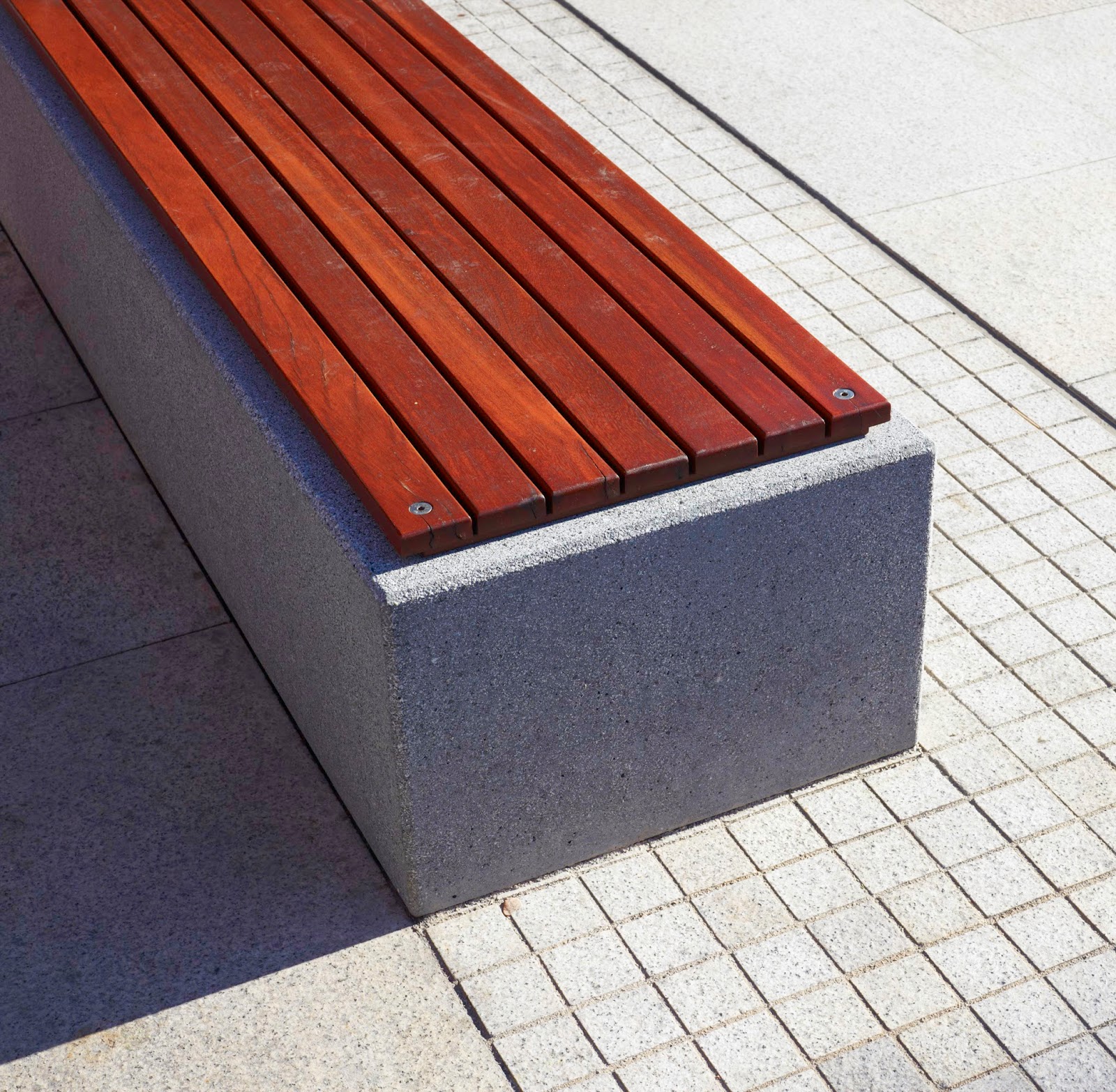 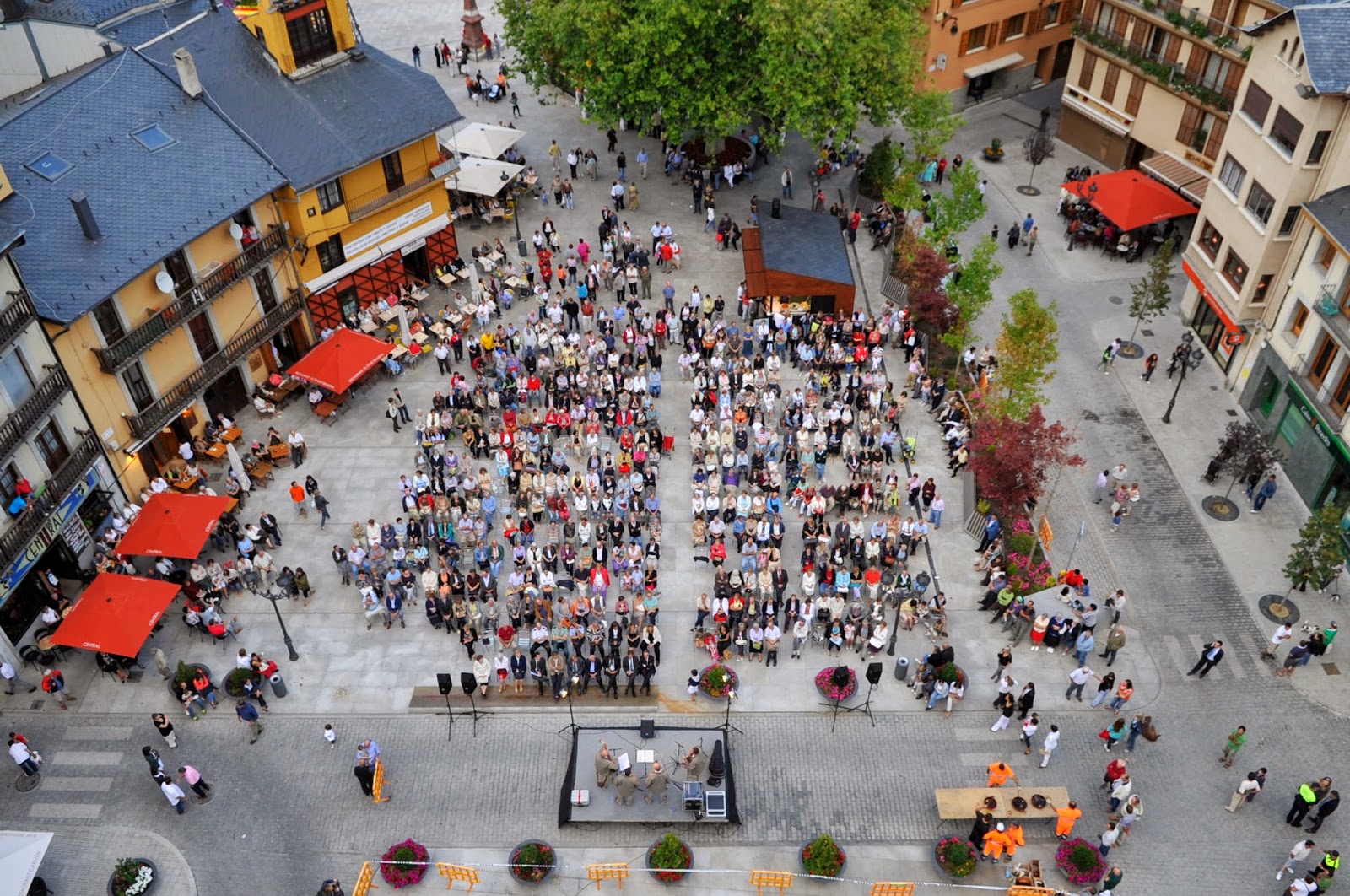