Project's description on ARCHDAILY [by the architect]:

"The Media Library is a strong cultural symbol for the Marsan urban area. It is a place of discovery, gatherings and exchanges for its users. It is a visible, distinctive building without being overpowering.

The Media Library stands in the middle of the Bosquet barracks, and care has been taken to augment the dialogue with the place’s strong architectural whole. With its clean envelope of pure geometric lines, a 197 ft x 197 ft square, the building complies with the classical layout yet contrasts with its austerity by offsetting the system with a corner opening onto the city. Its facades reflect the surrounding barracks like a respectful, deferential mirror.

The building has been designed as a covered cultural square by making the façades transparent and the floor uniform, also through its position in the middle of the barracks. This design is read by extending the planted roof to make it seem to be hovering above the ground. The grassy incline that surrounds the building draws the eye upwards, then gives way to alternating transparent and reflecting glass facades.

The Media Library’s central location in the military drill yard inspired a building with four main sides, varying from one another by simply adapting to the direction they face. The Media Library confirms its identity from whatever angle it is viewed. At night it becomes a lantern that brings the square to life, turning it into an inviting, open and transparent space. The interior space on the ground floor is completely open and centres around a patio, the design of which has been inspired by Matisse’s paintings of acanthus leaves, and the volumes of which recall Alvar Aalto’s vases.

The various functions are organised naturally on the open floor space, which maintains visual continuity and diffuses daylight evenly. It is the first patio used by a Media Library as an open reading room. It is a place that provides a relaxed, contemplative atmosphere for its users. User intimacy is created by the strong architectural elements that inspire visual interplay. It may well be this «surprise», almost hidden, patio that makes the building so popular with the public." 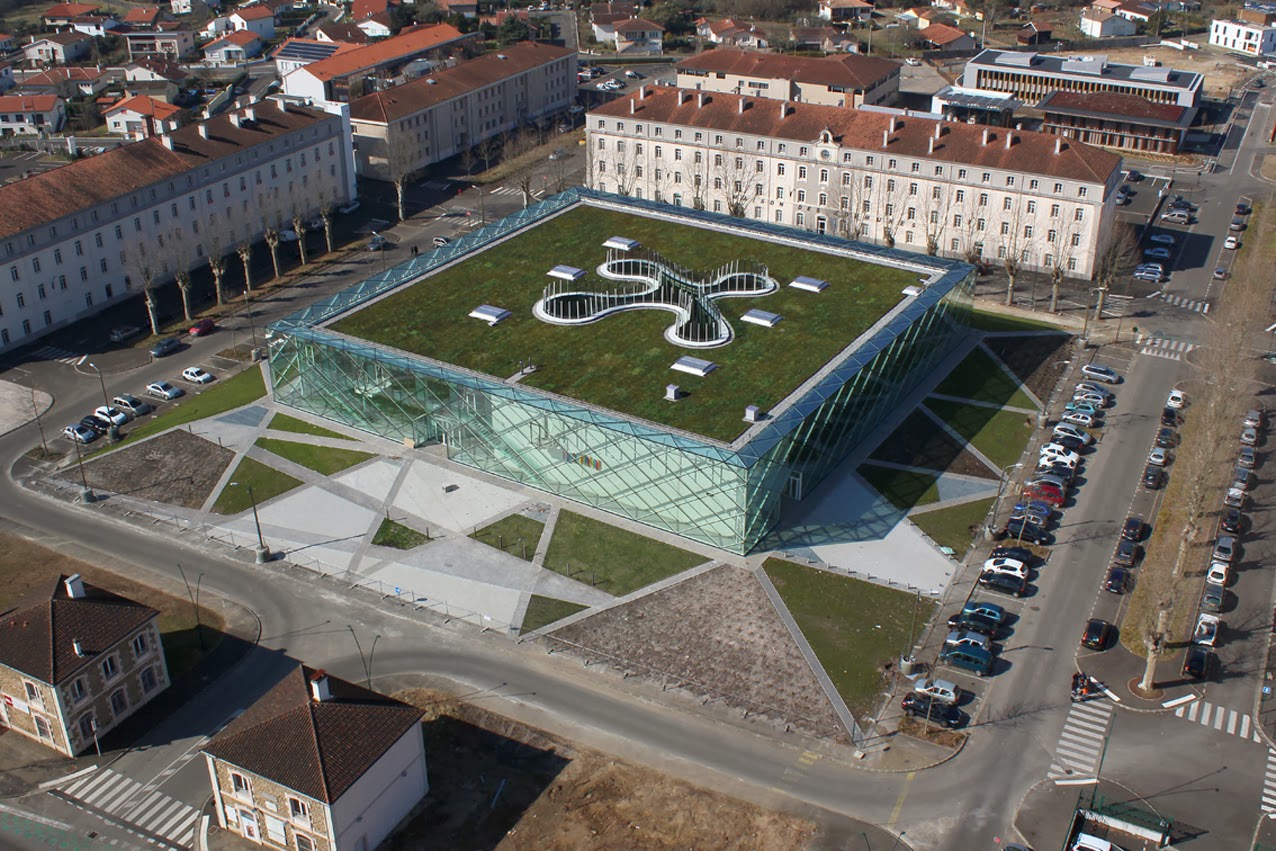 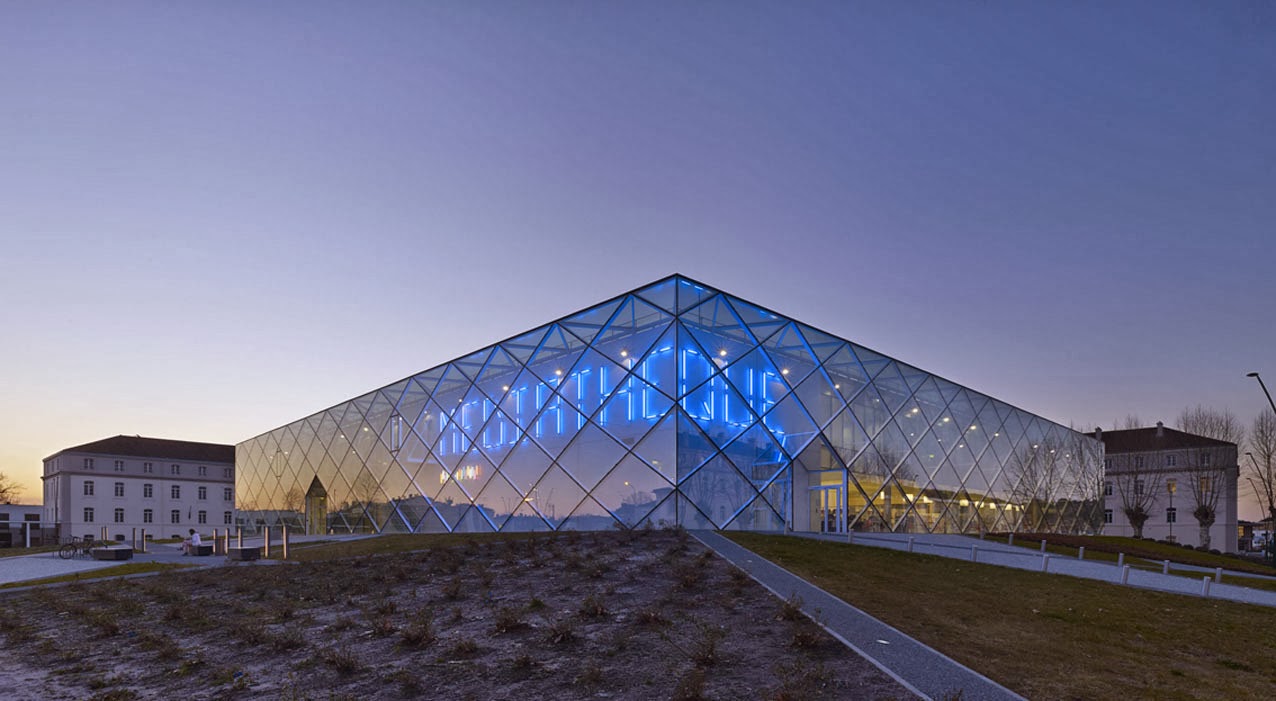 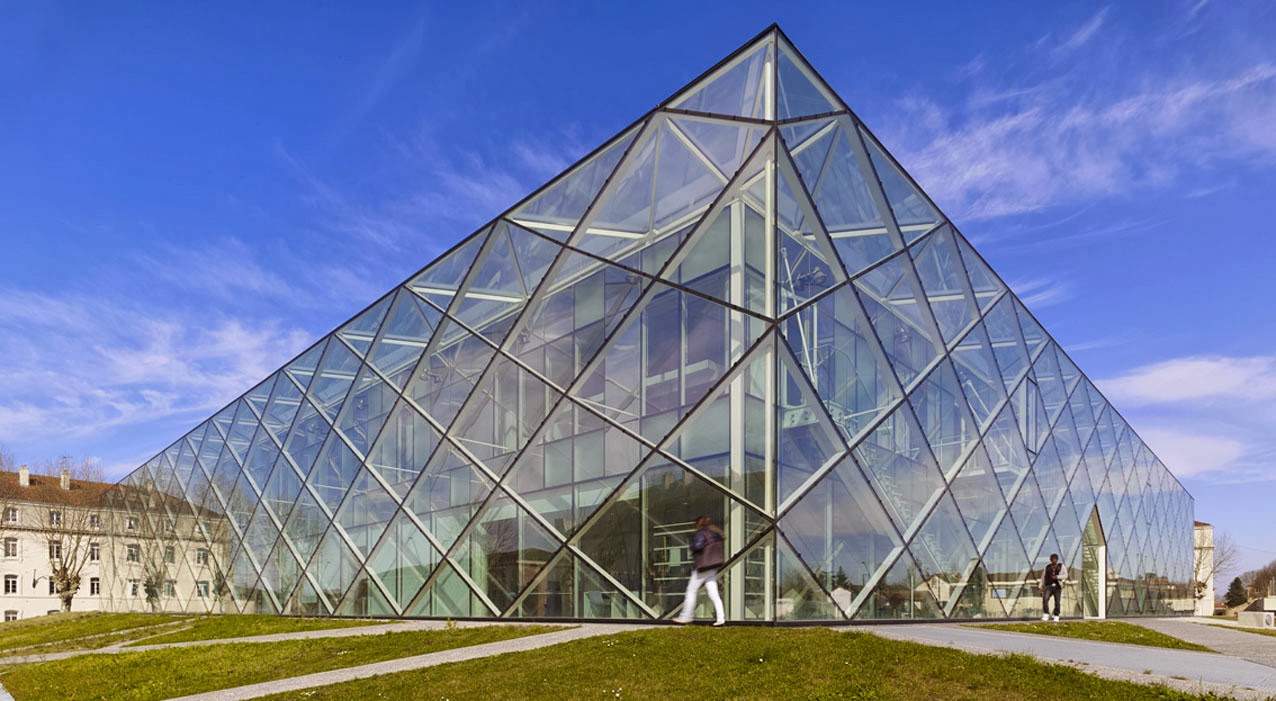 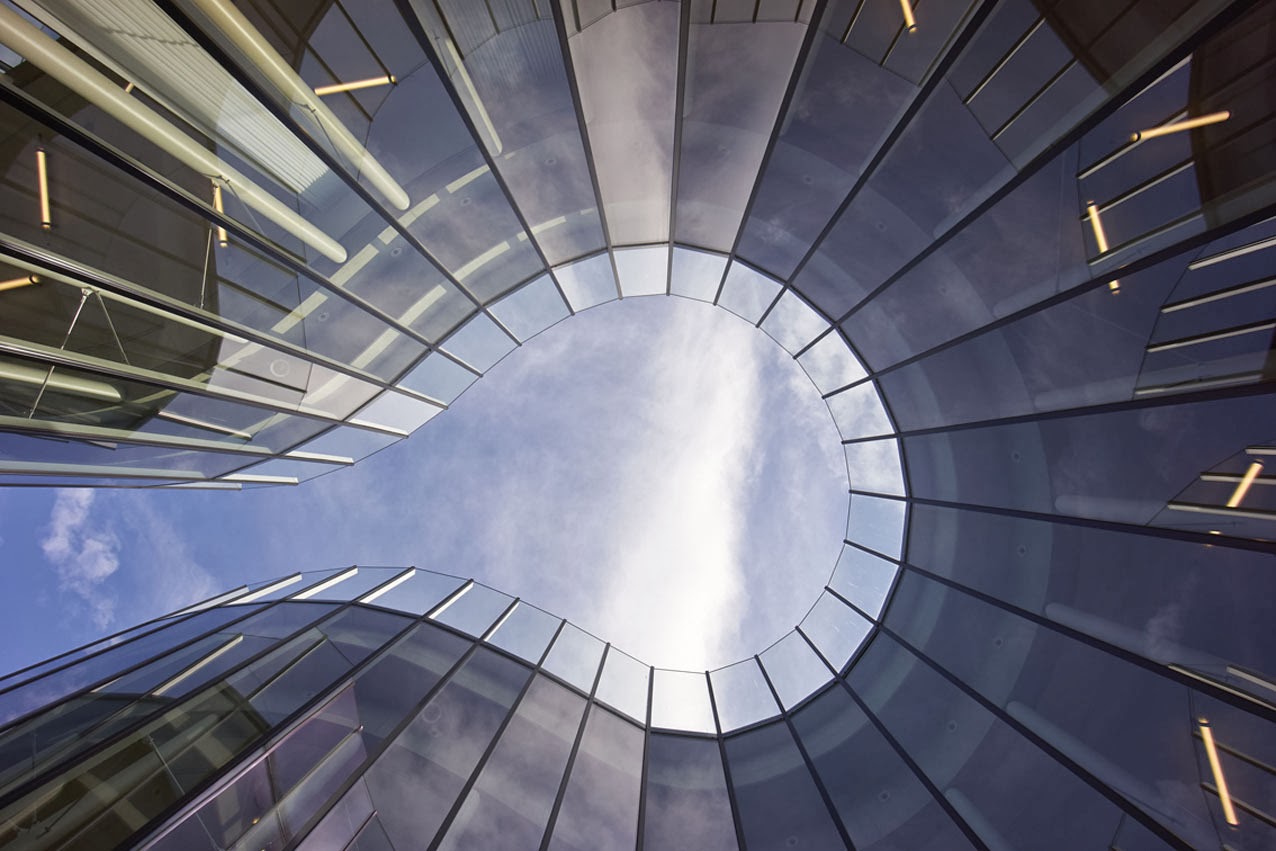 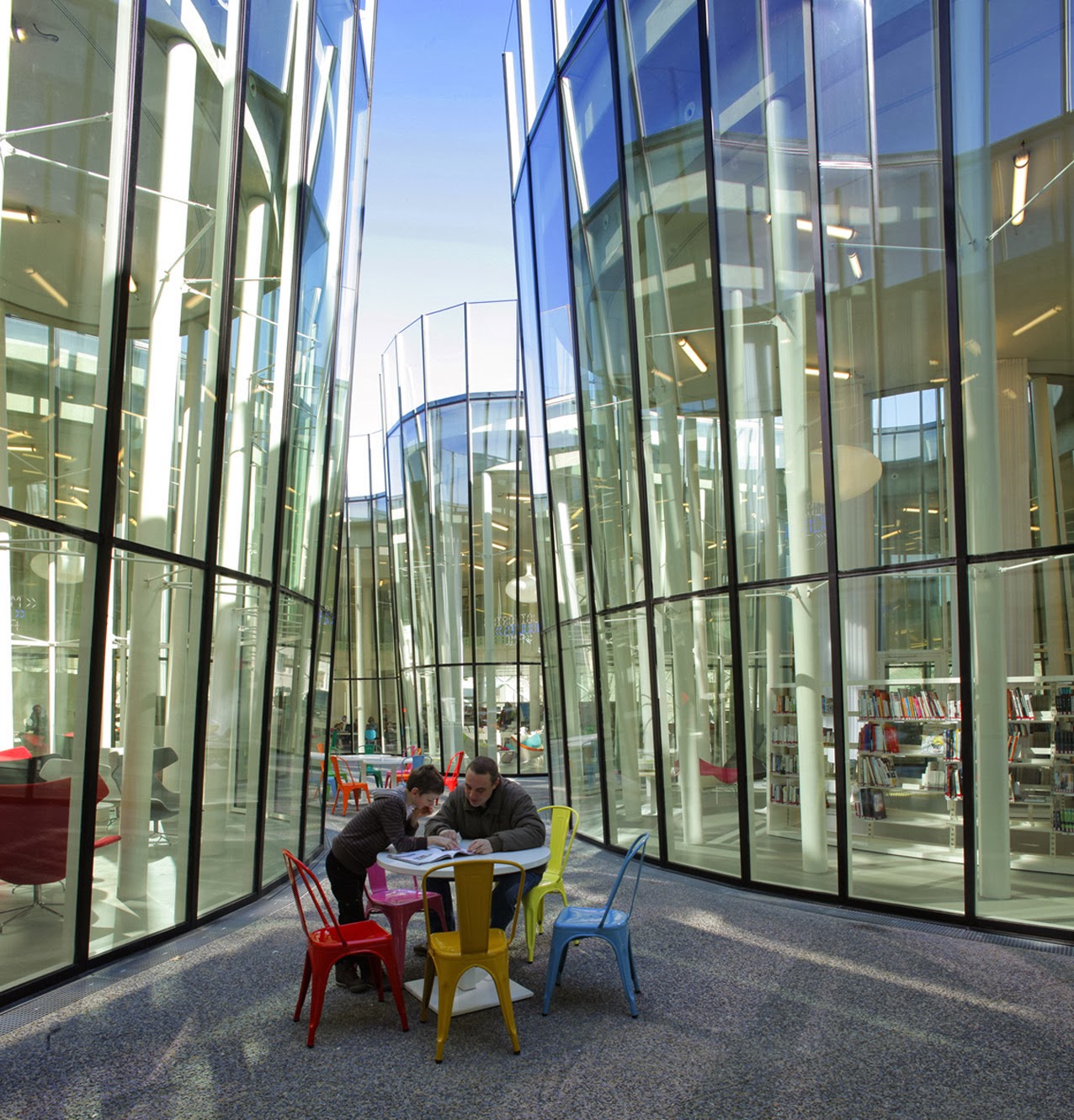 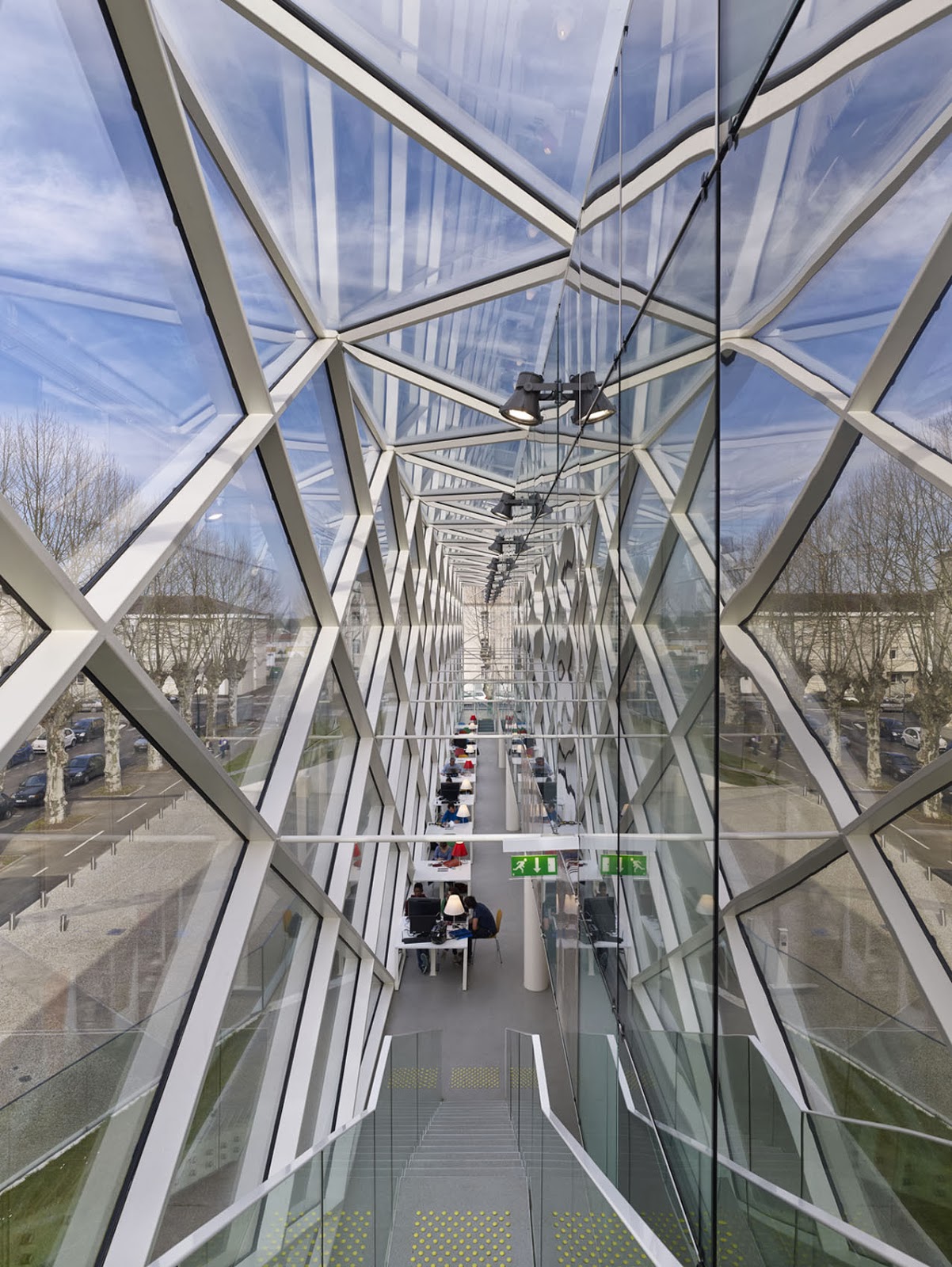 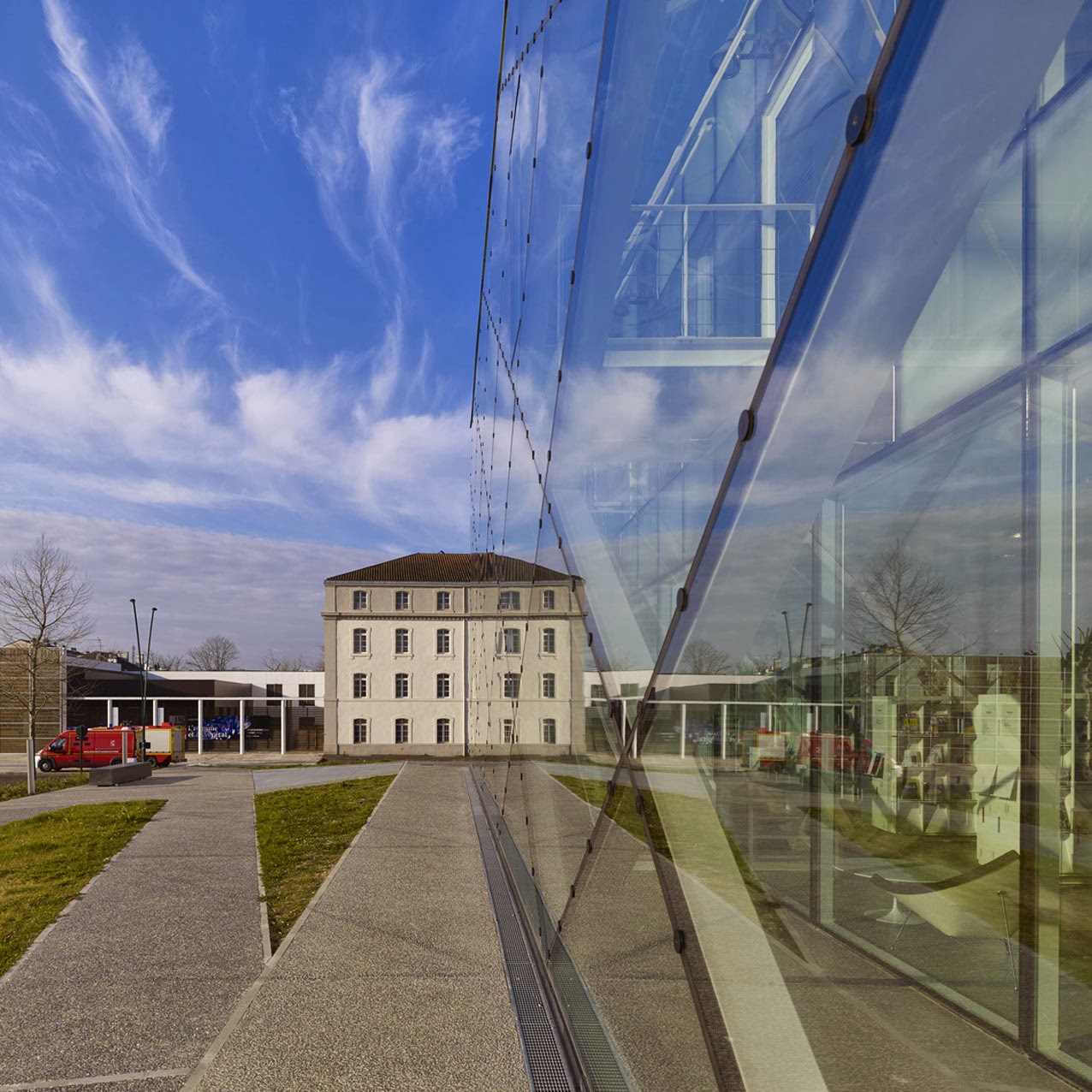 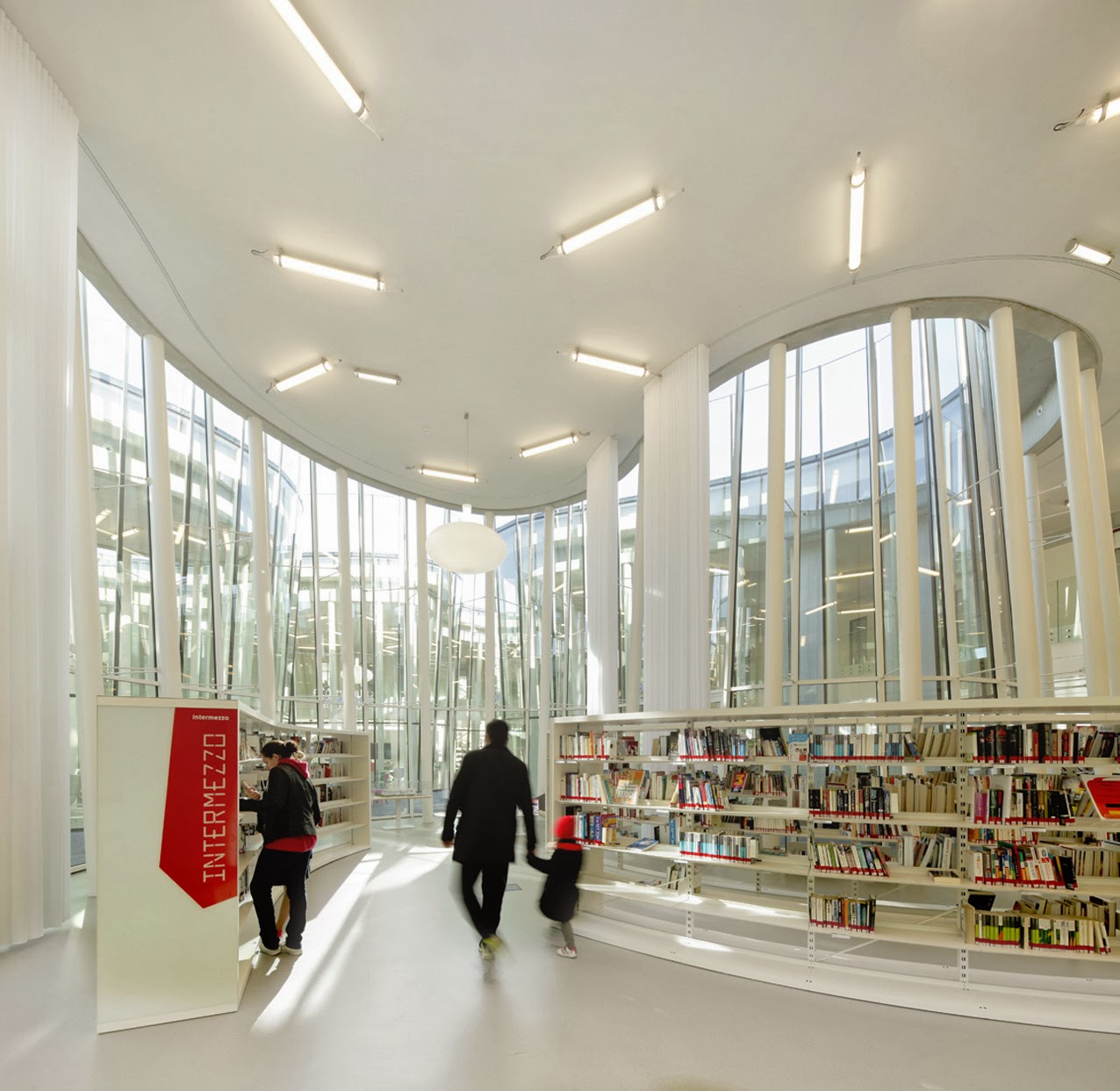 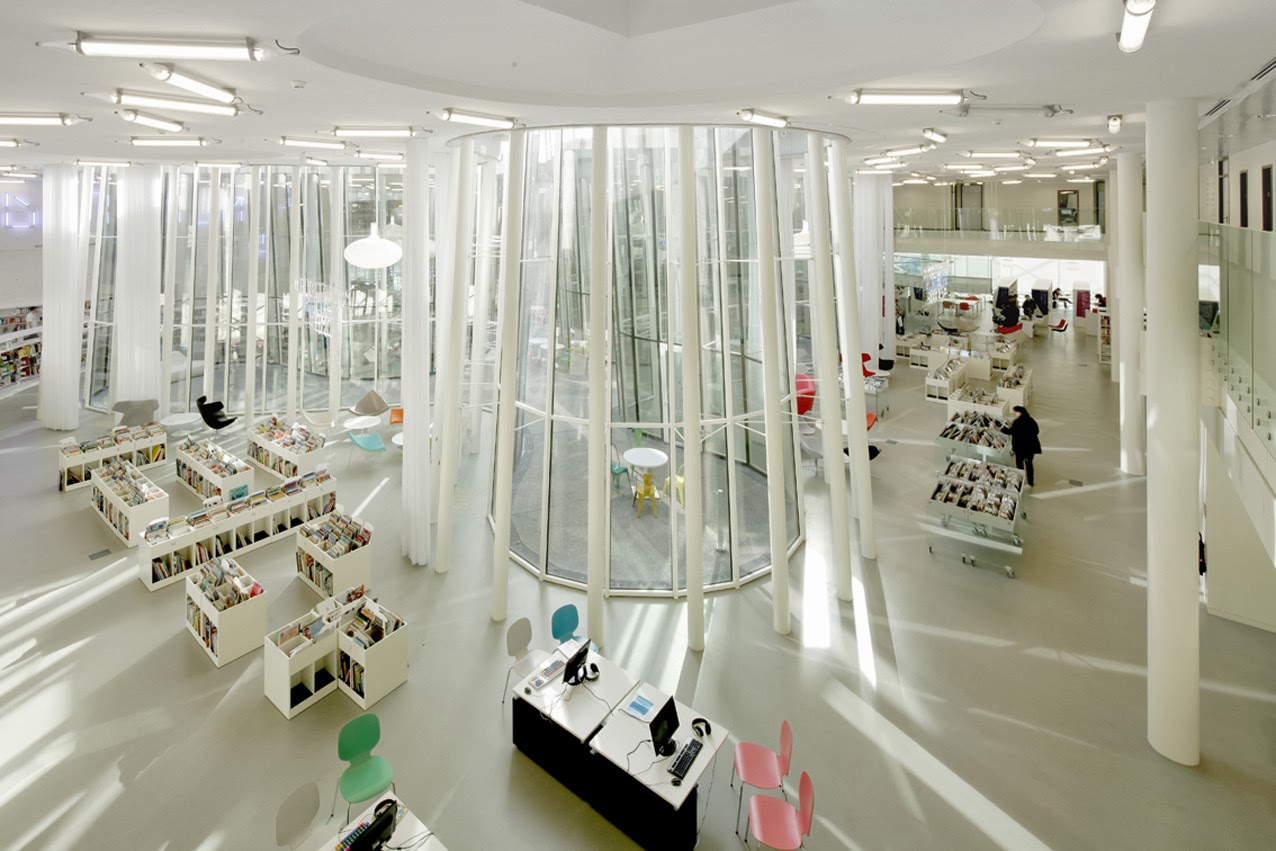 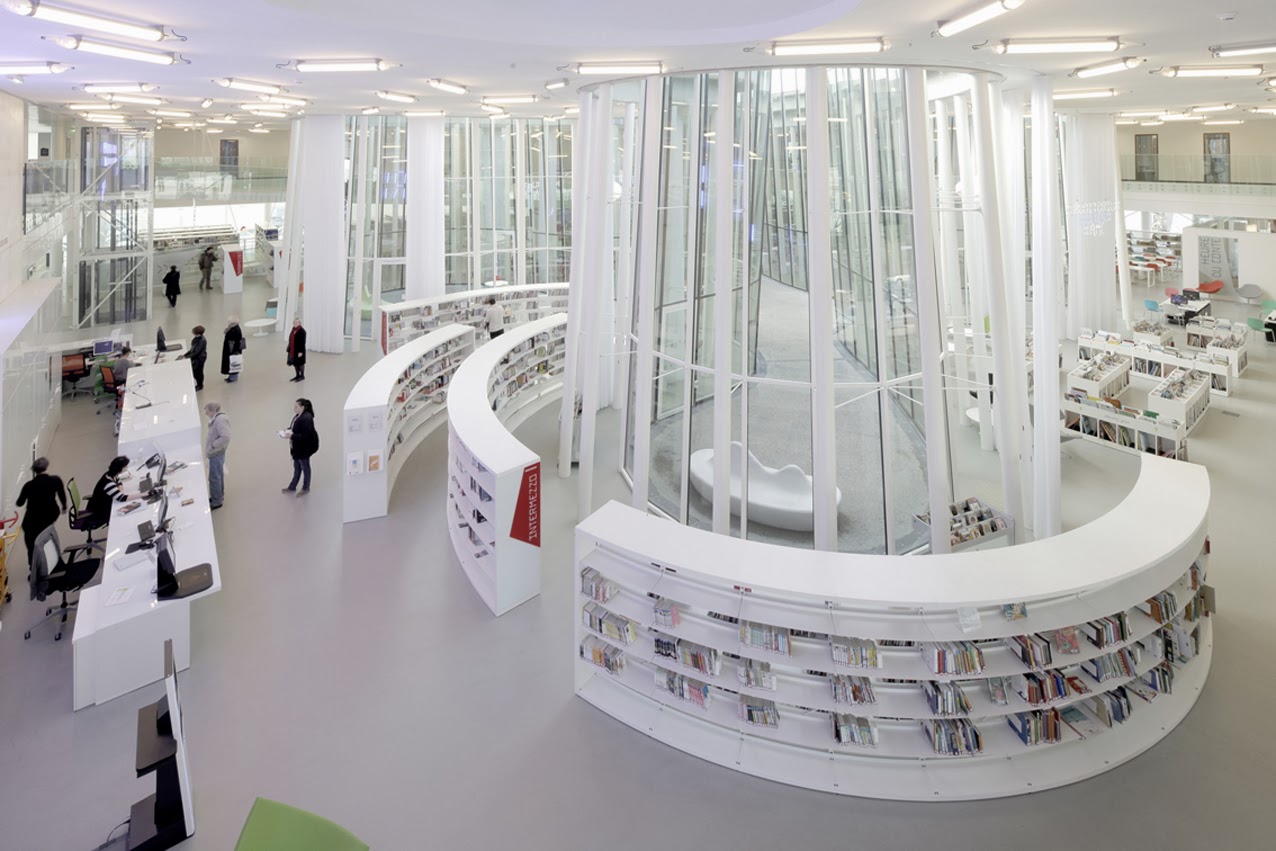 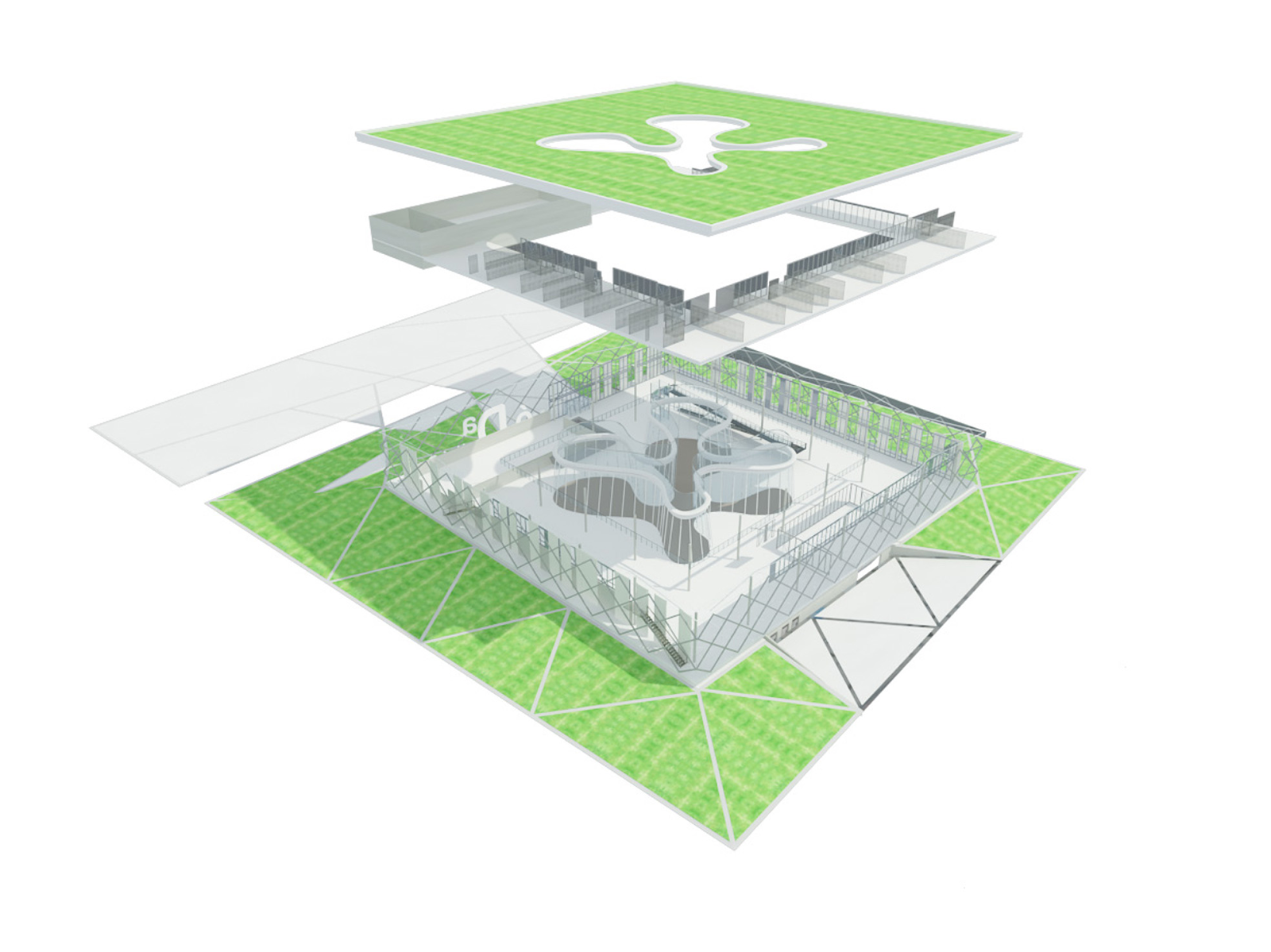 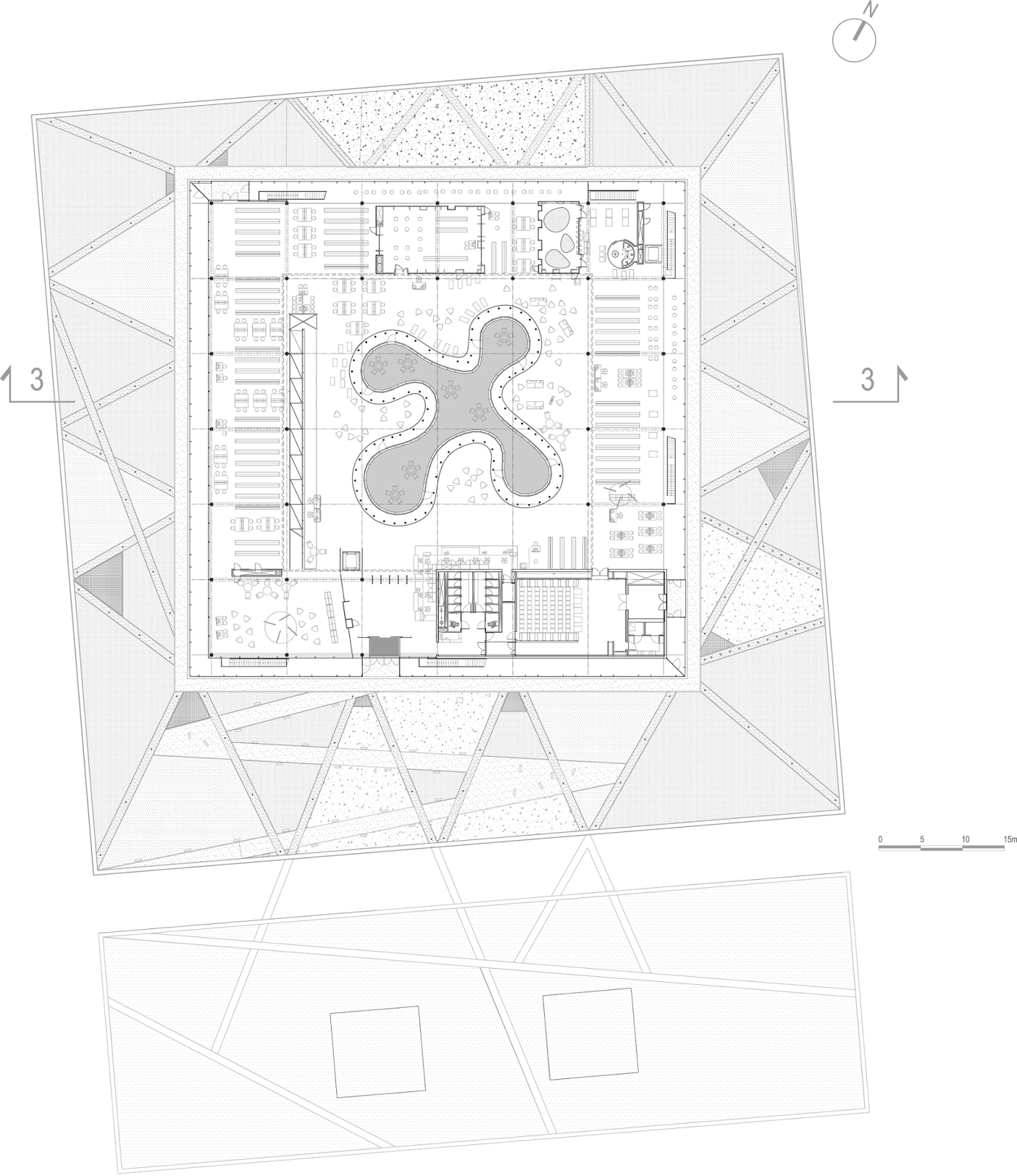