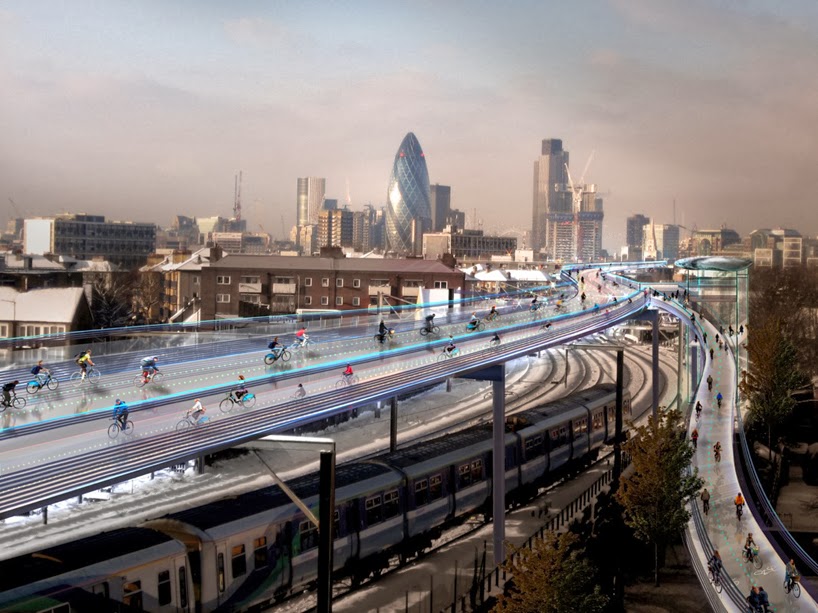 The British office Foster + Partners, in cooperation with Exterior Architecture and the consultants Space Syntax, developed a project that intends to create a new space dimension in the crowded city of London. The project proposes a network of elevated pathways above the city's railway system, which intends to encourage cycling in Central London. It is estimated that a network like this might be used by about 6 million people, 12 thousand cyclists per hour.

"I believe that cities where you can walk or cycle, rather than drive, are more congenial places in which to live. to improve the quality of life for all in London and to encourage a new generation of cyclists, we have to make it safe. the greatest barrier to segregating cars and cyclists is the physical constraint of London’s streets, where space is already at a premium. skycycle is a lateral approach to finding space in a congested city. by using the corridors above the suburban railways, we could create a world-class network of safe, car free cycle routes that are ideally located for commuters."

The project's cost estimation is pointed to the 240 million euros and its implementation would last for about 20 years. Its 220 km of extension and 200 access ramps would allow to travel across town in about half an hour. The project execution is now dependent on EU funds and other sponsorships.