Project's description on ARCHDAILY [by the architect]:
"Architecturally, the project is articulated by three cubes, these cubes are arranged in such a way that they generate courtyards between them, which serve to illuminate the various rooms and spaces. These cubes house the more static part of the functional program, that is, living room, kitchen and bedrooms. These volumes have a stone and solid character, where windows are perceived as perforations. White stone from Capri was the material chosen for these containers. With an apparently anarchic but extensively studied unfolding, it serves to increase the sense of massiveness, and decreases the time required for cutting the stone. These three volumes are connected by a flat, light concrete slab, that gives the more tectonic image of the proposal and is a sort of enclosed porch. For these reasons, windows have no framing and are embedded directly into the stone walls that come in from the outside.

This flat slab is intended for a much more dynamic use, the circulation between volumes.
The second element that comprises this house are the courtyards arising from the layout of the volumes. The courtyards have different characters and finishes, depending on their position and function. The staircase is lit through a vertical courtyard that leads to the basement and is clad in the same white stone that makes up the facade. The kitchen overlooks a sheltered courtyard with a sunshade. The lobby is lit through another courtyard with glass walls and a reflecting pool in order to give it an ethereal character. The courtyard is lit through another courtyard filled with cornus sanginea, a type of plant with a very green stem.

The third and final element that comprises this house is the porch, which allows to project the interior to the exterior while allowing users to colonize the exterior space. The porch attached to the volume of the living room has the same intention as the hall, to be a slab of concrete with a very light appearance. Besides this porch, the house has many other different porches that are adapted to the needs of the area they protect: access, rooms… Porches, courtyards, and volumes along with light and shadow are the true materials that make up this house, which intend to help and make a better experience for its users." 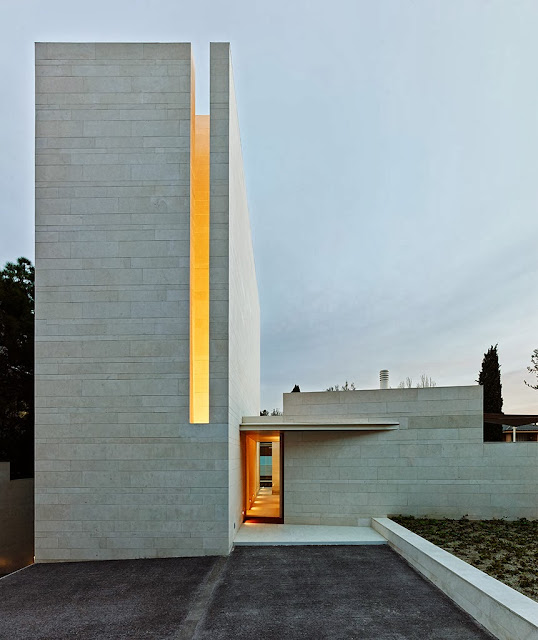 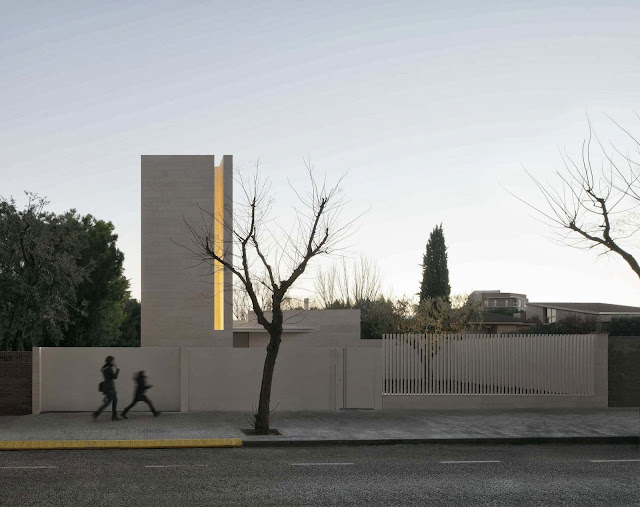 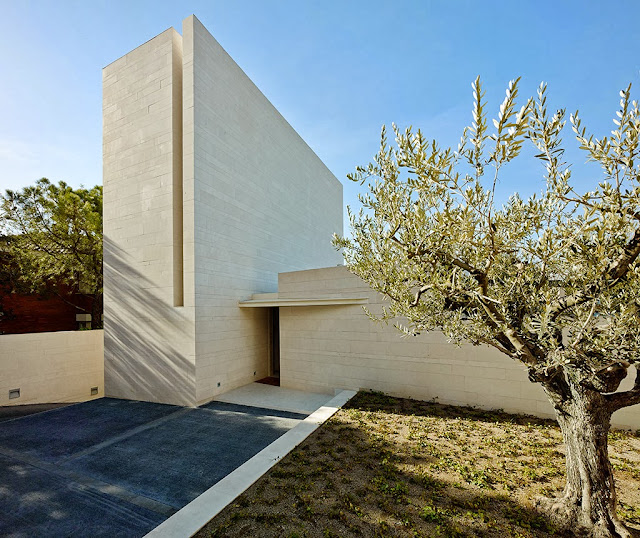 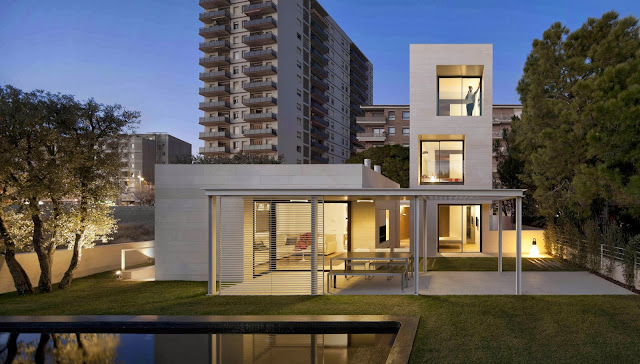 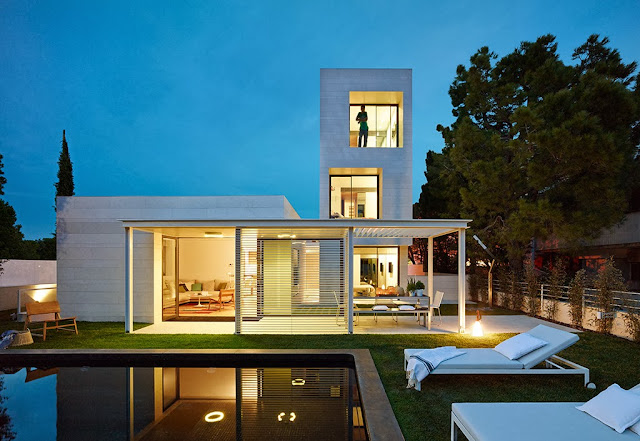 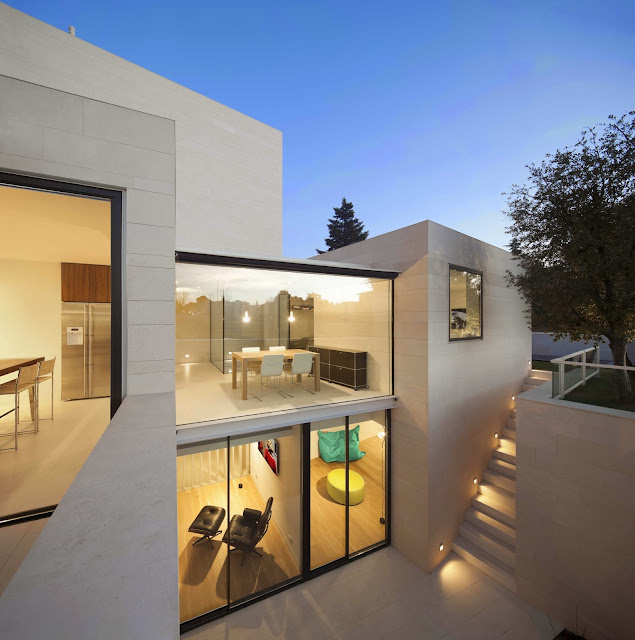 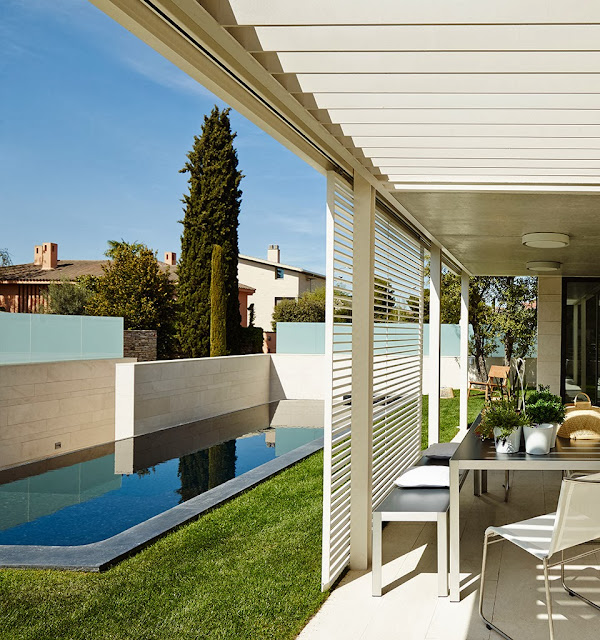 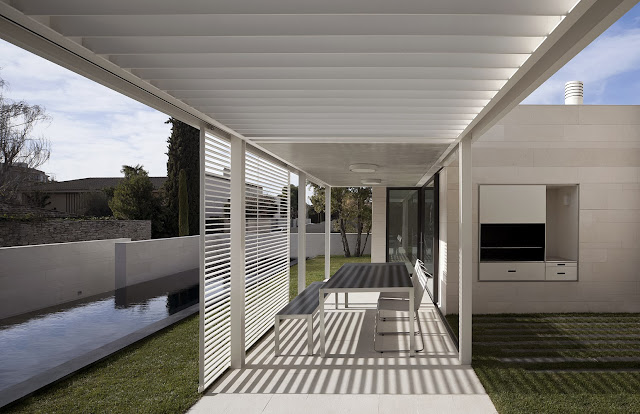 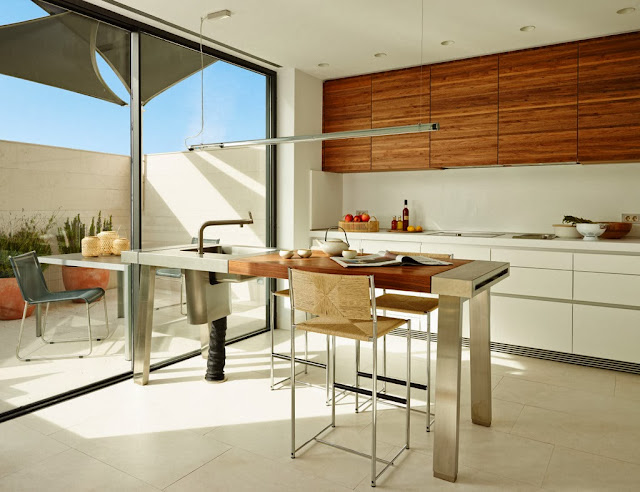 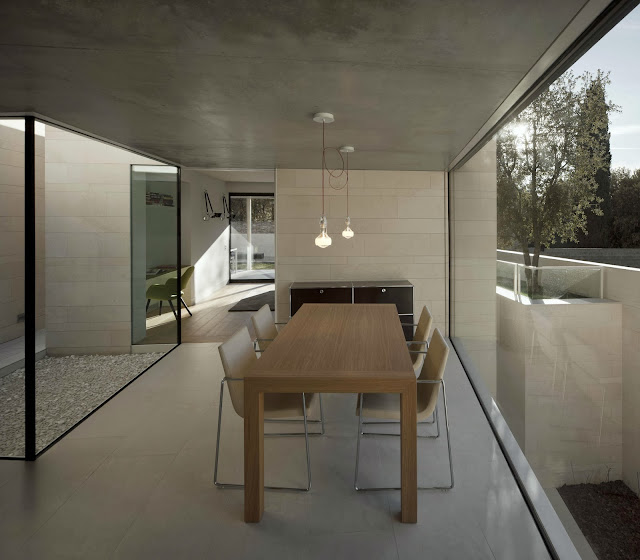 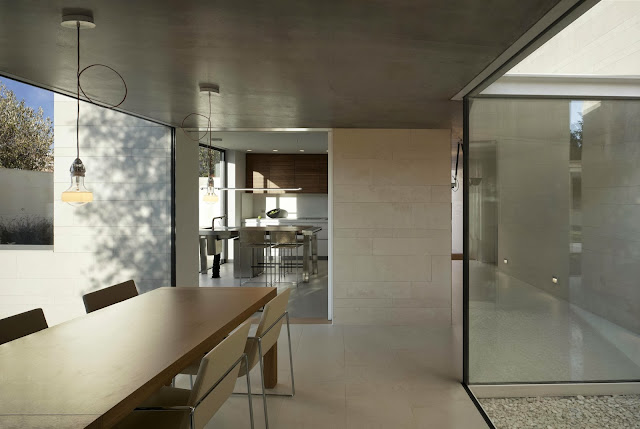 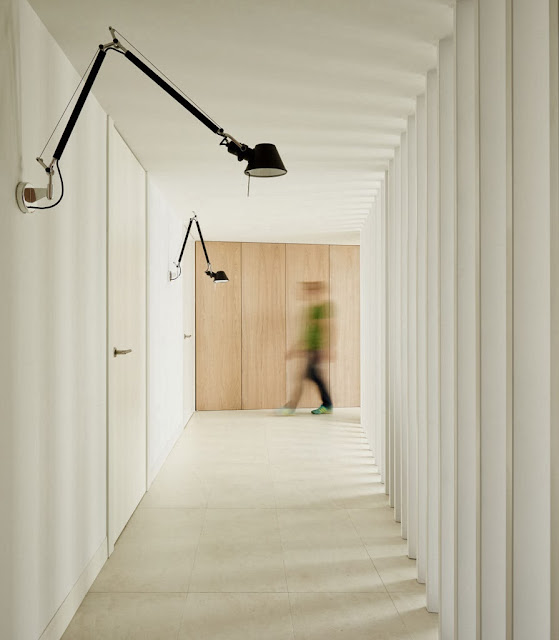 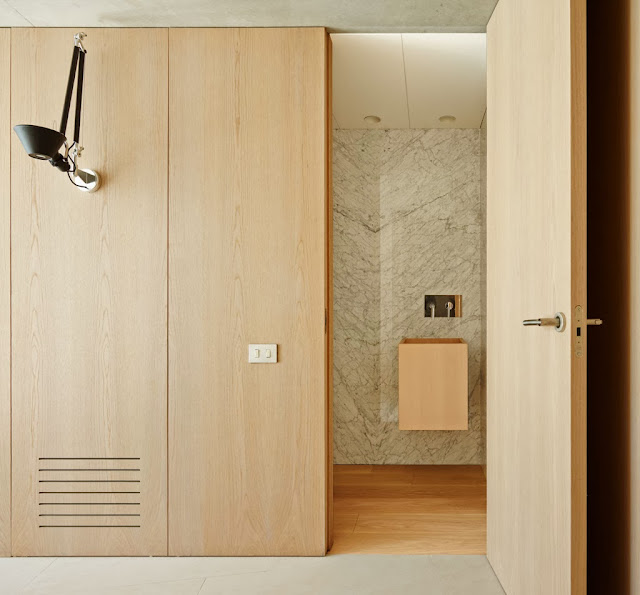 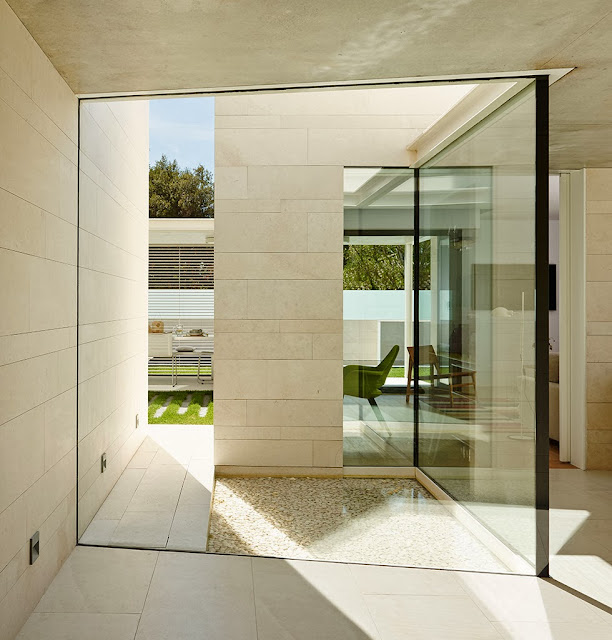 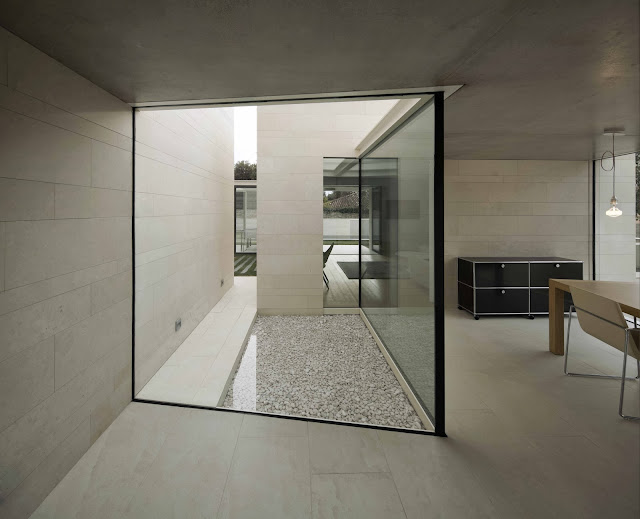 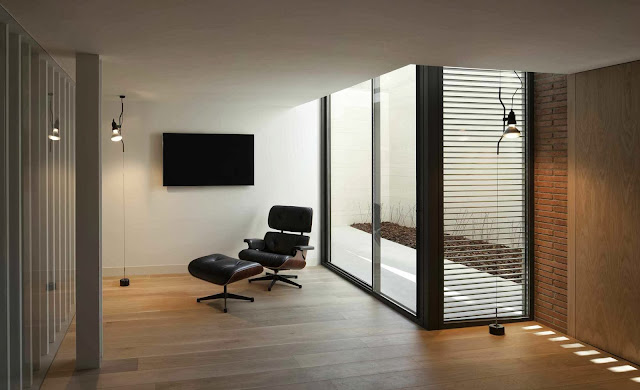 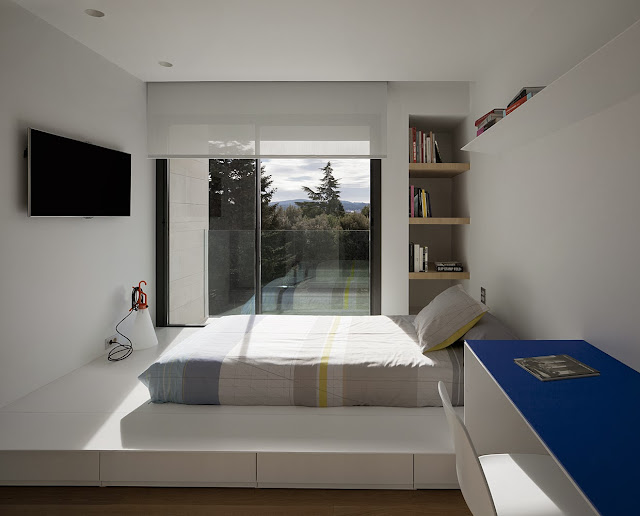 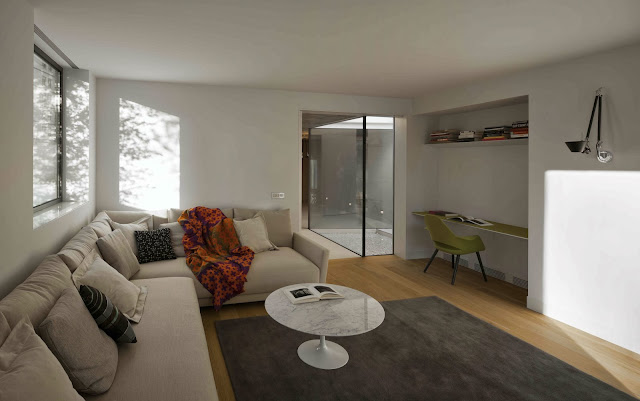 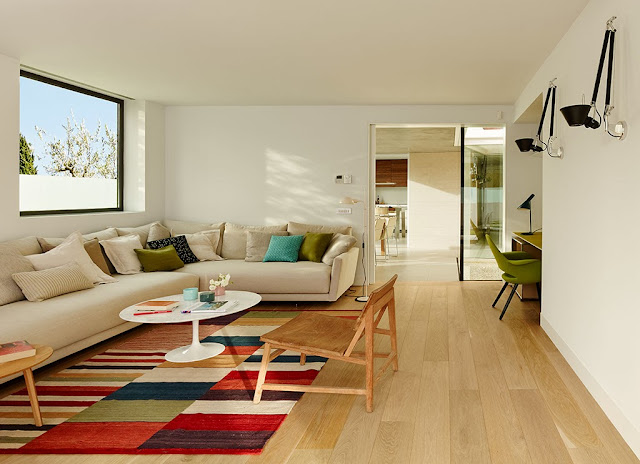