Project's description on ArchDaily:
Following two demolition campaigns for a world exhibition in 1913 and an administrative centre never built in the 60s, Ghent’s historic heart degenerated for decades into a desolate parking lot in between a suite of three adjoining Gothic towers. In two consecutive competi- tions between 1996 and 2005, Robbrecht en Daem architecten and MJosé Van Hee architects proposed their own programme, countering the initial competition requirement.
Rather than just providing an open space for events, they sought, by meticulously positioning a market hall, to rectify this deficiency and reinstate the presence of old urban areas that had become unrecognisable. The building positions itself between Poeljemarkt, Goudenleeuwplein, and a new lower ‘green’ connecting to the ‘brasserie’, bicycle park and public toilets below the hall. And although the building clearly occupies a position on the 24,000m2 site, it fits in well. Com- pared to St. Nicholas Church, Belfry and Cathedral, it assumes the heights of a lower group of buildings such as the adjacent town hall, from which it derives, mathematically, its profile.
As an urban interior, the inside embraces the passer-by with a dual modulated wooden ceiling, whose small windows scatter light inwards. The exterior, the entire building in fact, seems to assume a respectful role relative to the nobler historic stone buildings, by using a wooden, almost humble, finish. A glass envelope protects the wood and provides a soft shine, with the sky reflected, integrated. Large buffer basins to absorb rainwater, principles of low energy consumption for the bras- serie, use of truly natural materials, the contribution of public transport and a clear vision about giving new value to the historic centre with its old spatial structures, are just parts that broadly flesh out ‘sustainability’ for the future. The centre of Ghent will again become a social spot for people. 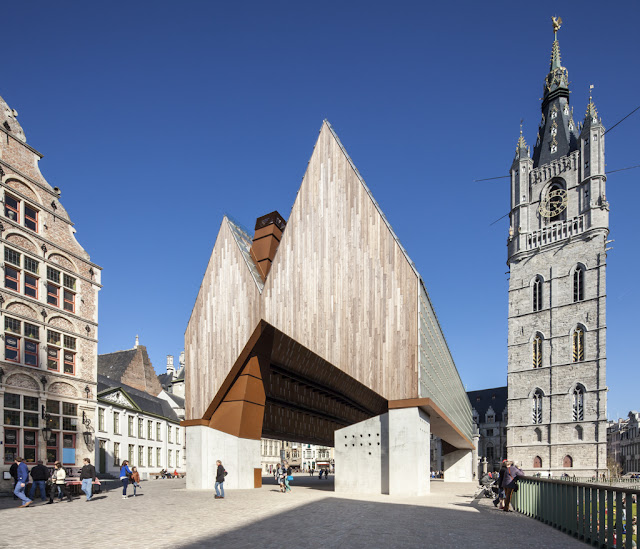 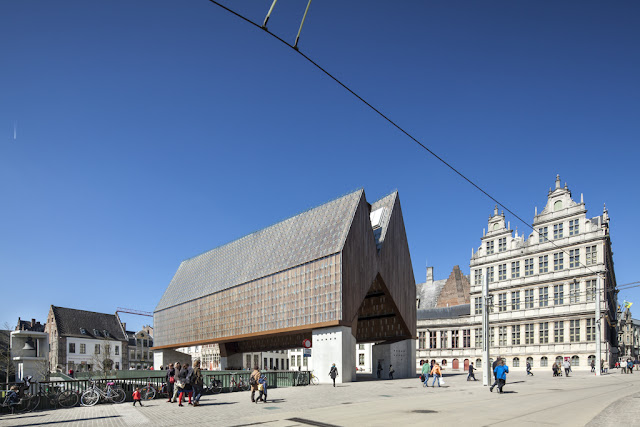 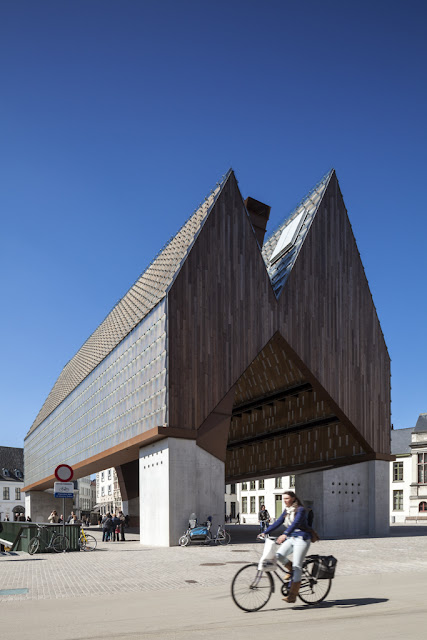 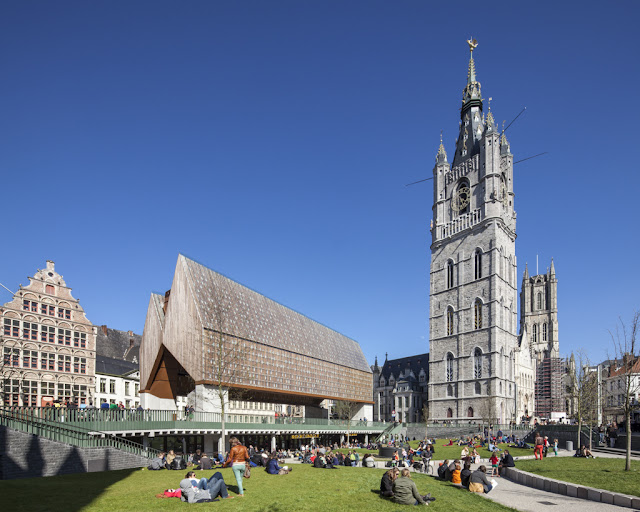 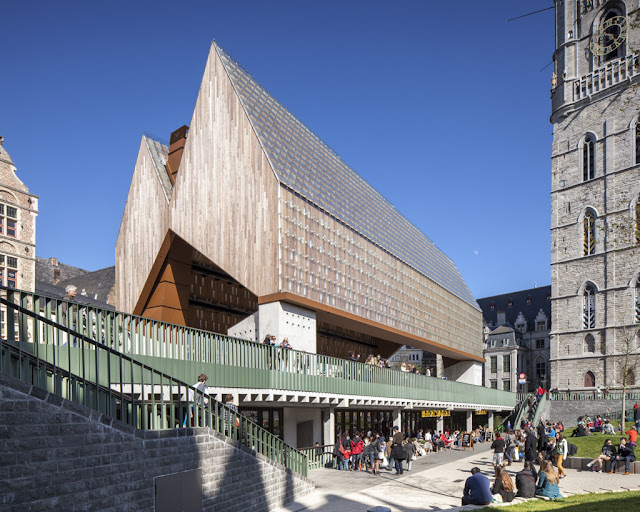 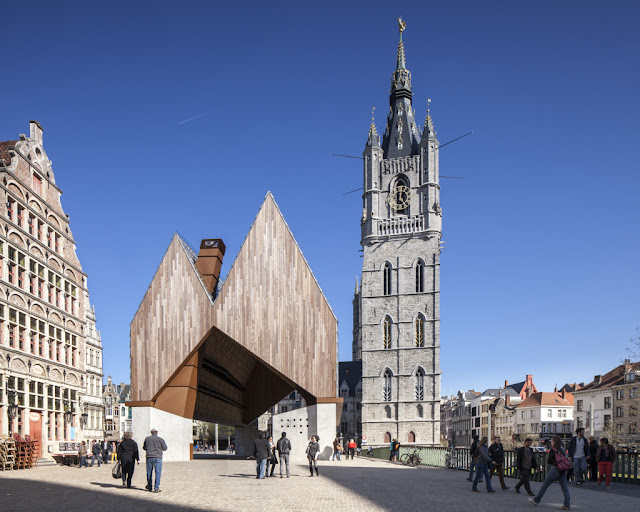 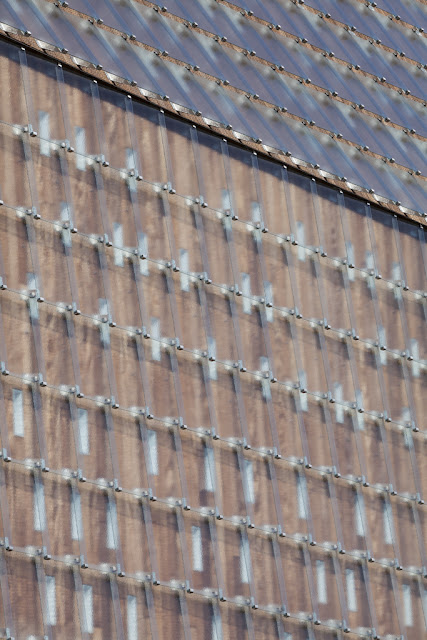 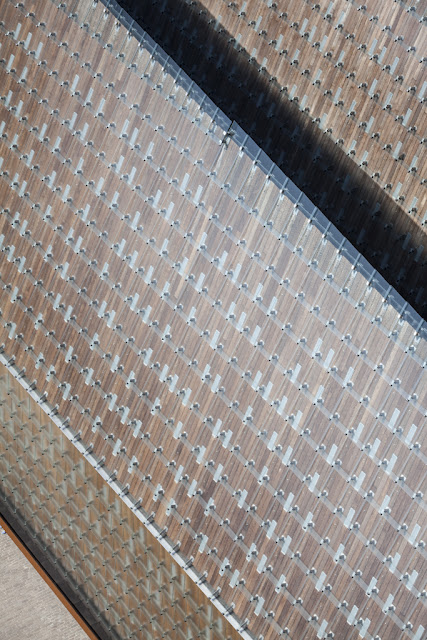 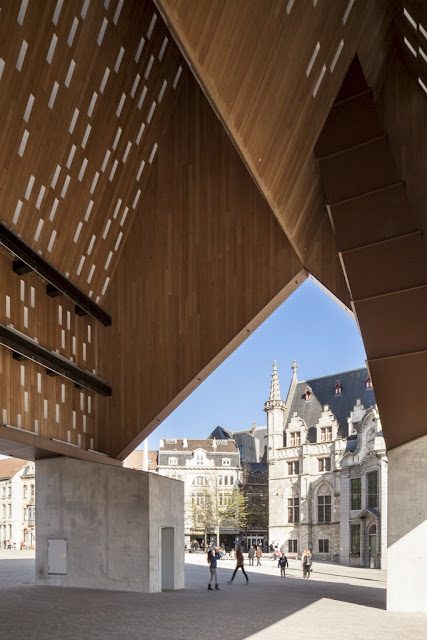 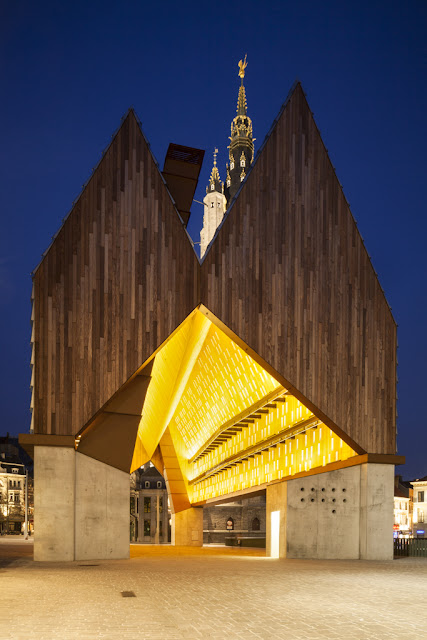 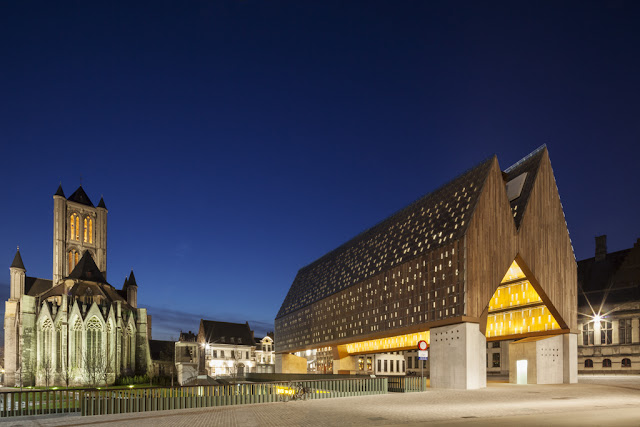 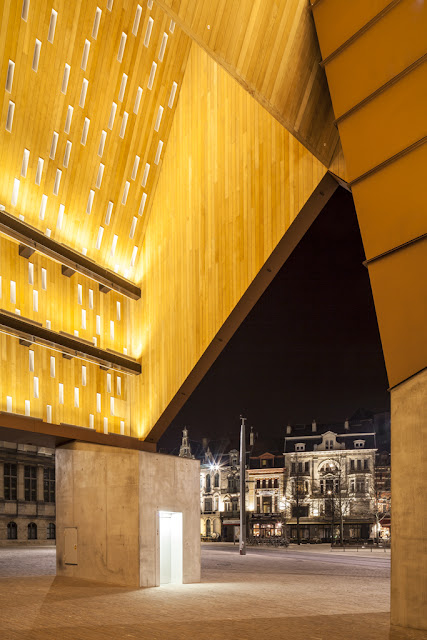 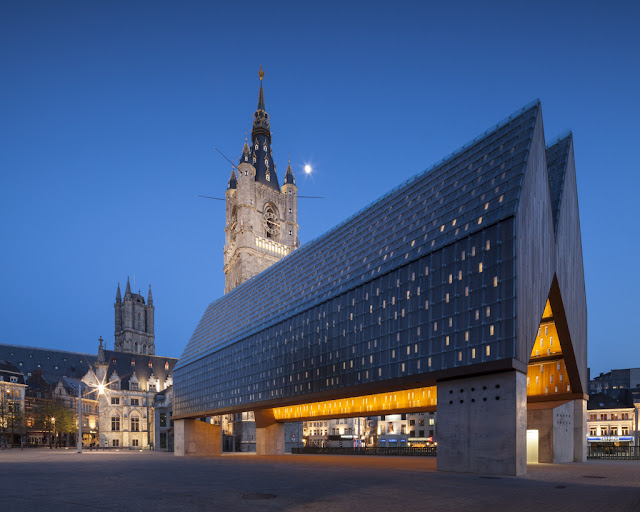 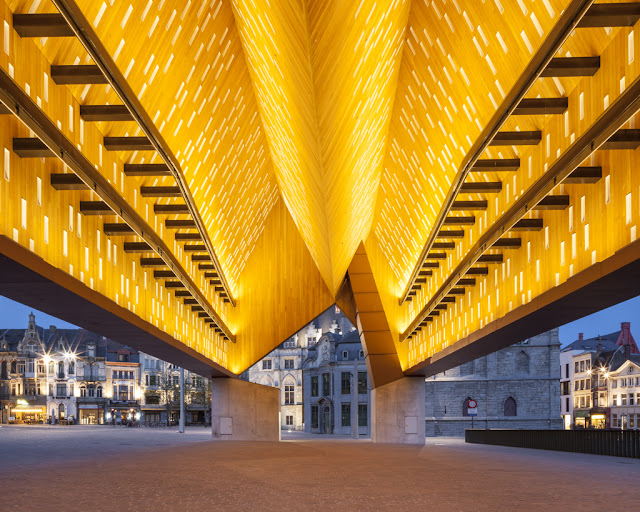 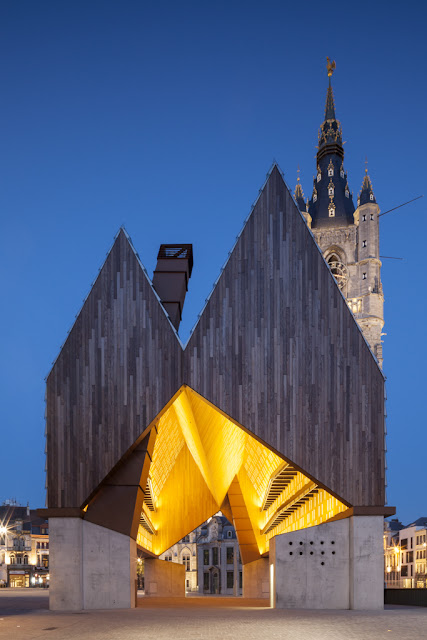 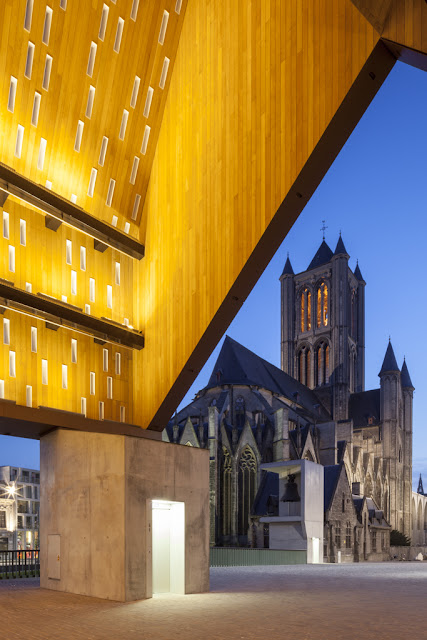 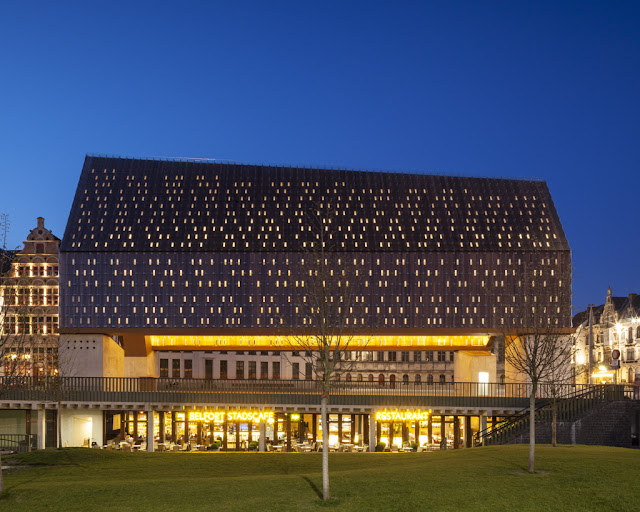 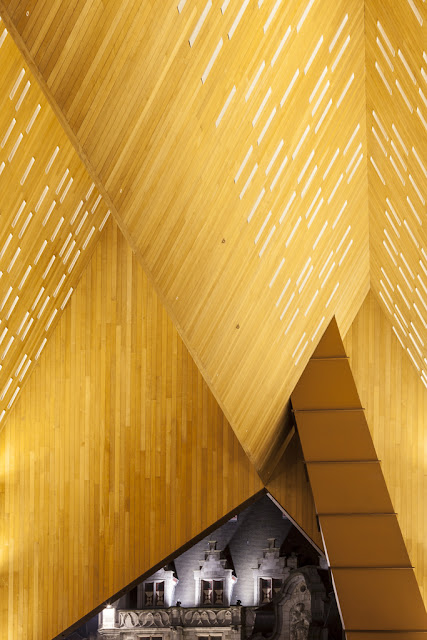 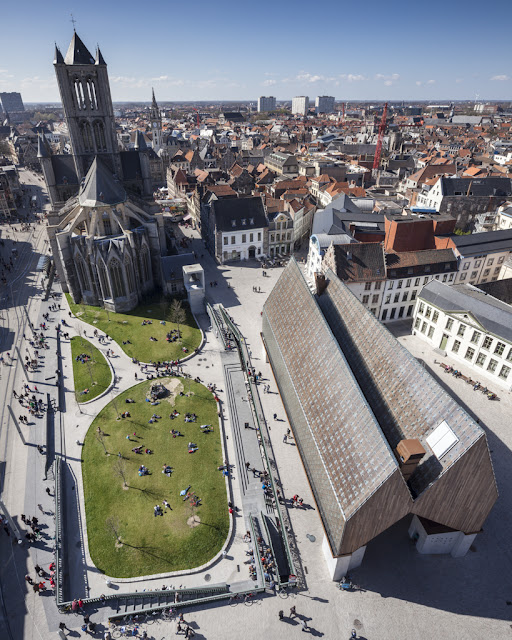 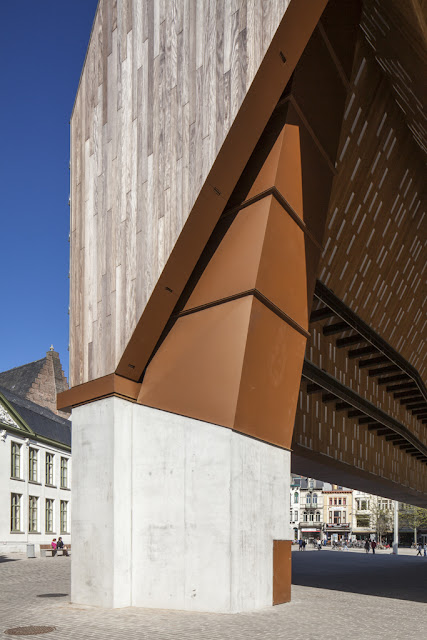 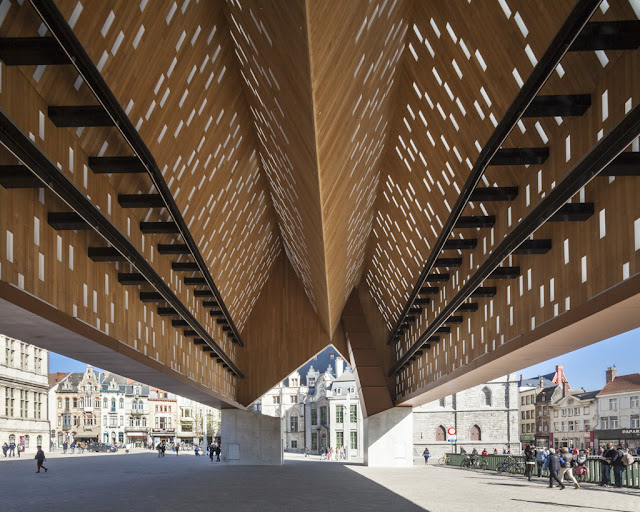 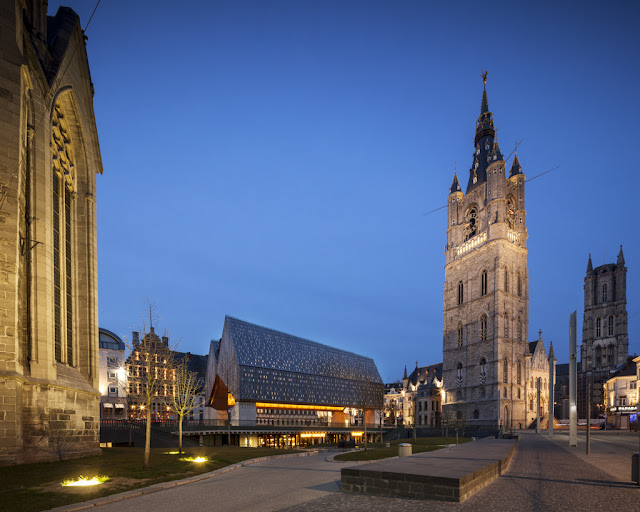 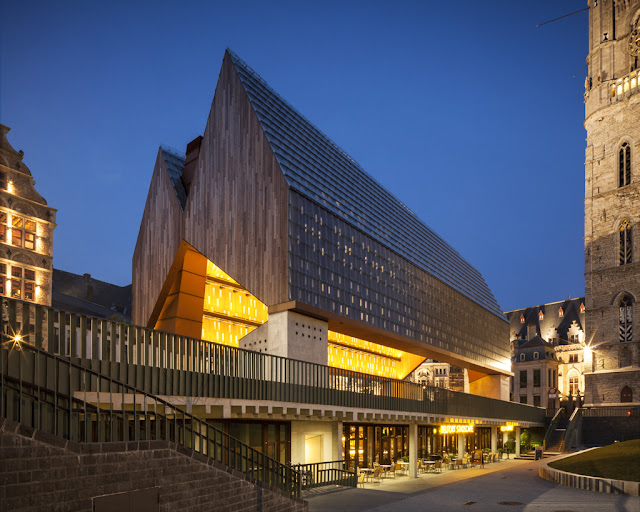 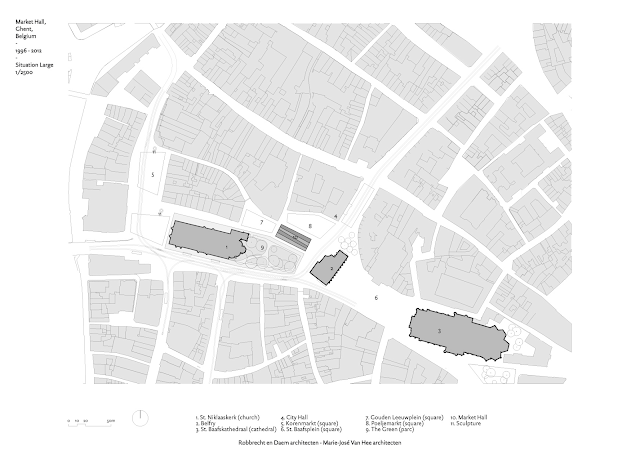 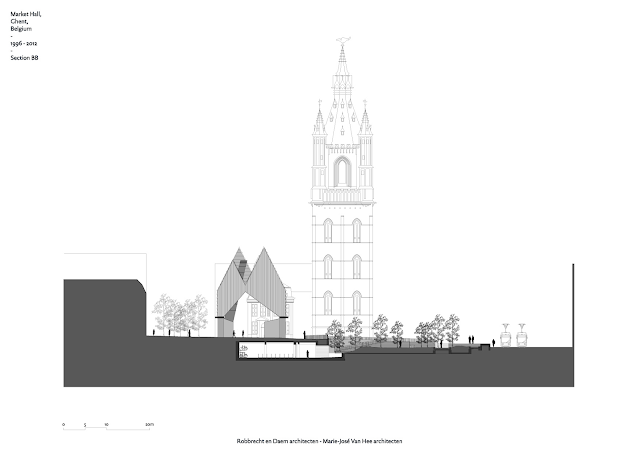 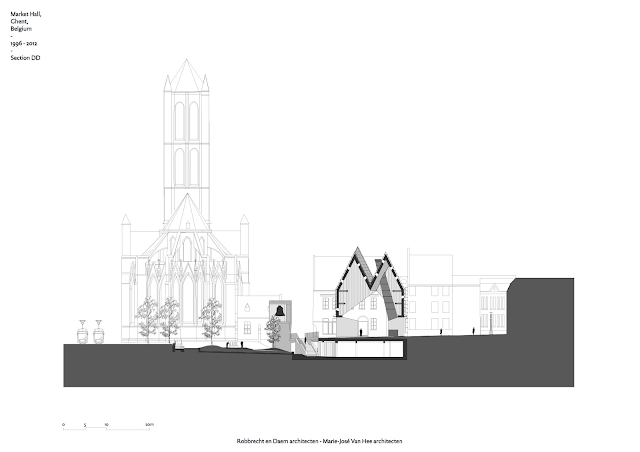