Area: 1.300 sqm
Year: 2011
Photos: Stefan Müller
Project's description on ArchDaily.com:
"Serving as backdrop to the so-called “German National Festival”, Hambach Castle bears unique witness to both German and European history and is regarded as the cradle of German democracy due to the Hambach Festival which took place amid its ruins in 1832. Since its founding as a late Roman hilltop settlement in 305 AD, the castle has been modified extensively over successive centuries. After its transferral to the Hambach Castle Foundation in 2002, plans were drawn up for the structure to undergo extensive modernisation, remodelling and new construction work. The architectural competition organised by the Foundation was won by the architect Max Dudler.

Dudler was insistent that any additions to the historical building should augment rather than overwhelm the existing structure. The architecture should “respect the language of the place by coming up with a suitable architectural response to the structure’s existing vocabulary”. Bearing in mind the building’s almost two thousand year history, his goal was to extend the existing historical structure through subtle means. A balanced architectural whole was created through use of a contemporary style embedded in tradition and history.
During the rebuilding work, Dudler attached great importance to exposing the building’s original substance. The existing walls were painstakingly cleaned, opened up and consolidated, thereby creating both spatial and chronological connections which had remained concealed until then. The new features, made from materials such as cherry wood, sandstone, steel and glass, blend into the space naturally, and all technical elements are well disguised.
The architecture of the castle’s “restaurant1832“ – with its panoramic stone terrace offering breathtaking views – also takes its visual lead from the defensive walls. These walls were strengthened to an extent, resulting in a sculptural building whose dining function also benefits the complex as a whole. The restaurant has many windows which are glazed flush with the interior wall. These deeply recessed forms in various sizes are distributed like paintings across the restaurant wall, creating sophisticated visual compositions which establish an enhanced relationship with the stunning landscape beyond. The light and rectilinear restaurant harmoniously nestles into the existing historical castle building, providing both an optical continuation of the medieval ring wall and a logical evolution of the building’s structural form. Made of local yellow sandstone, these walls heavily influence the site’s overall appearance and it was for this reason that Dudler chose the same material for new construction work.
The concept of “creating a building from the wall” resonates with the building ensemble as a whole. This results in unobtrusive, clean-lined structures which complement the principal castle building, thereby offering visitors a historically respectful reception. 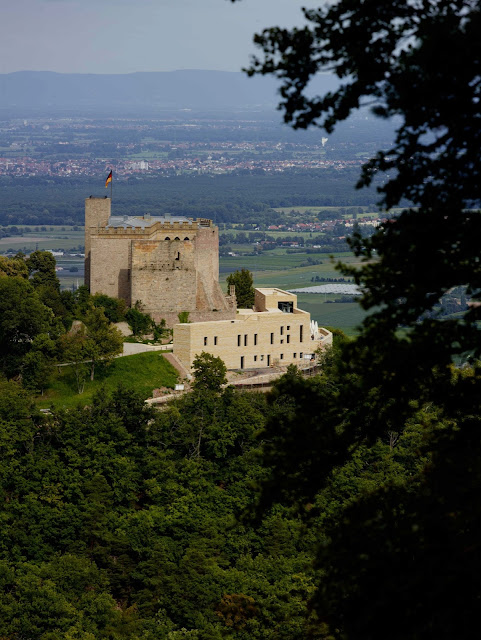 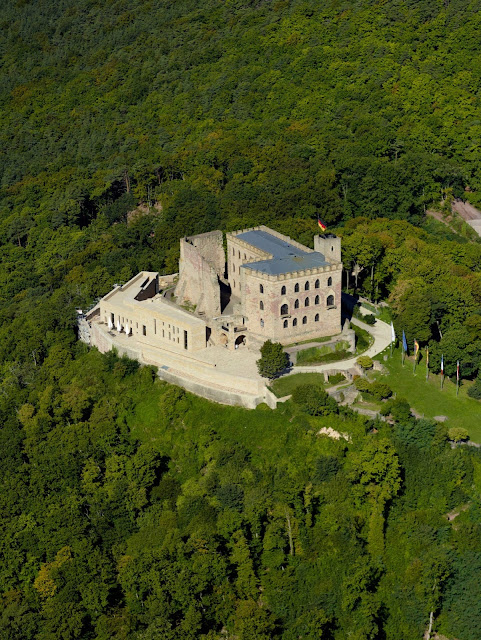 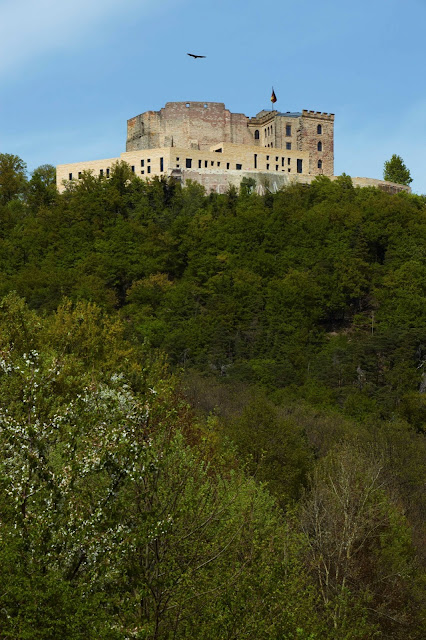 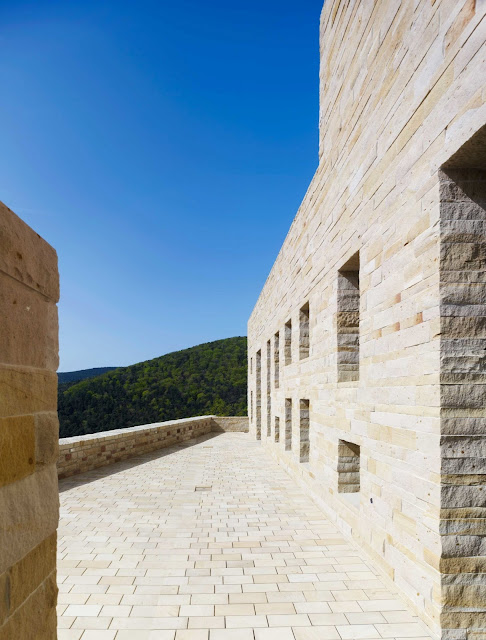 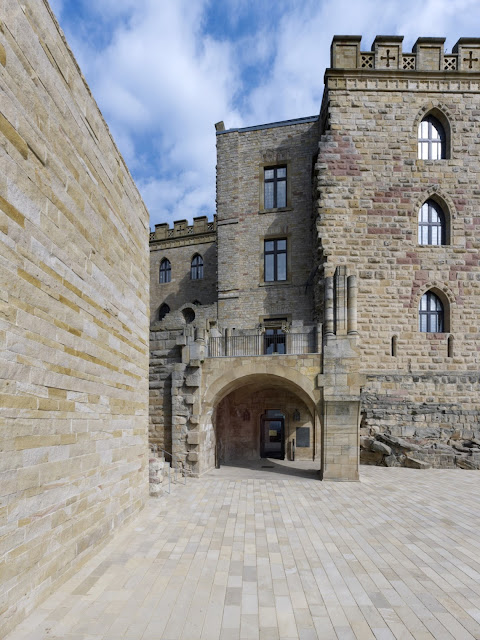 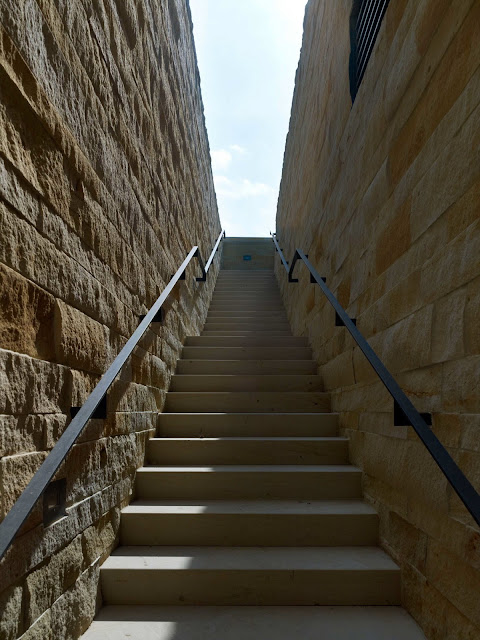 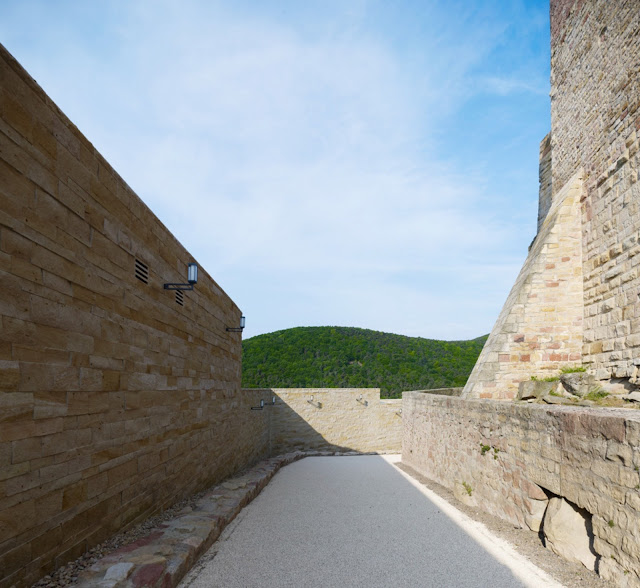 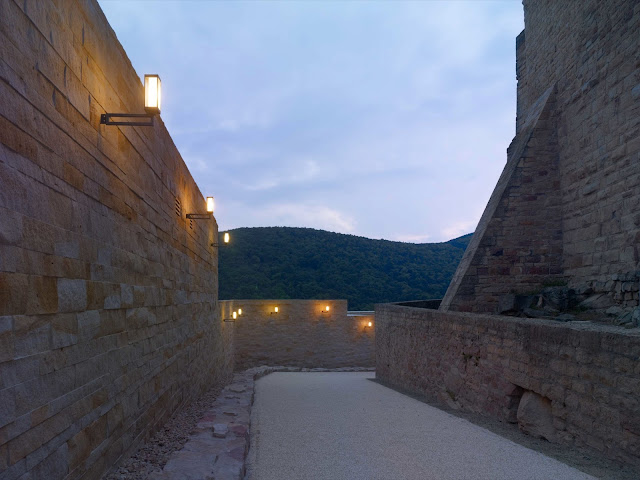 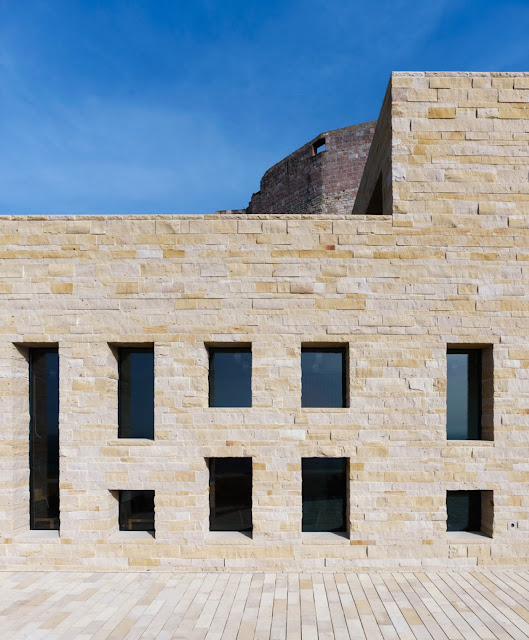 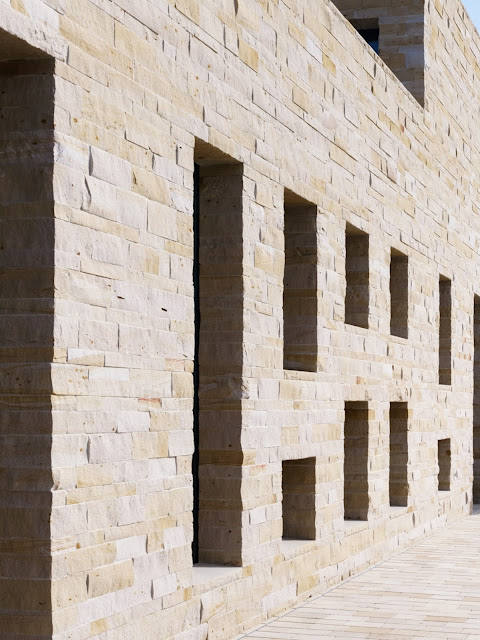 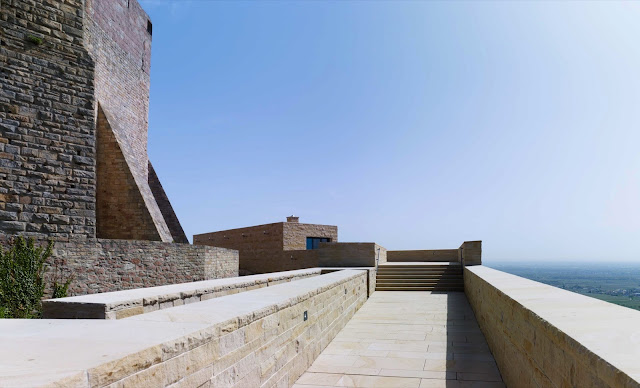 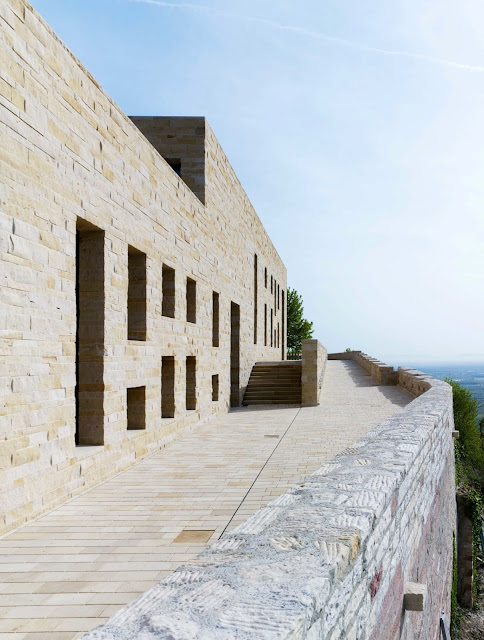 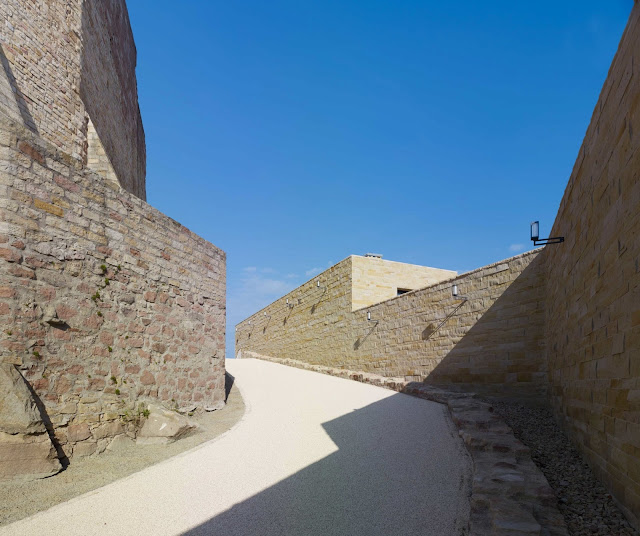 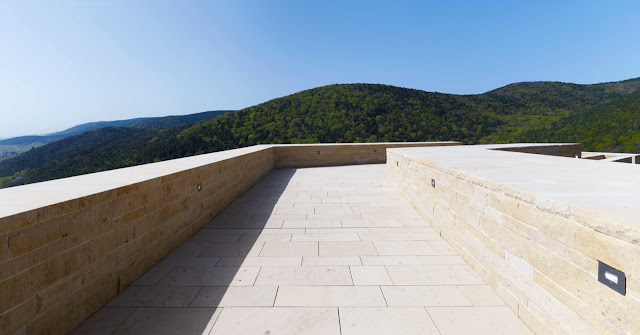 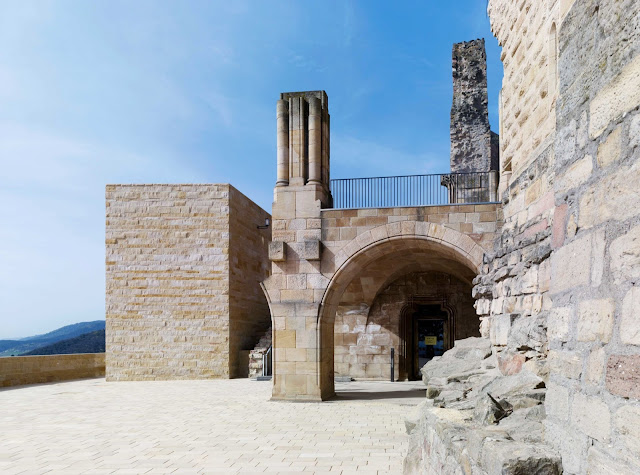 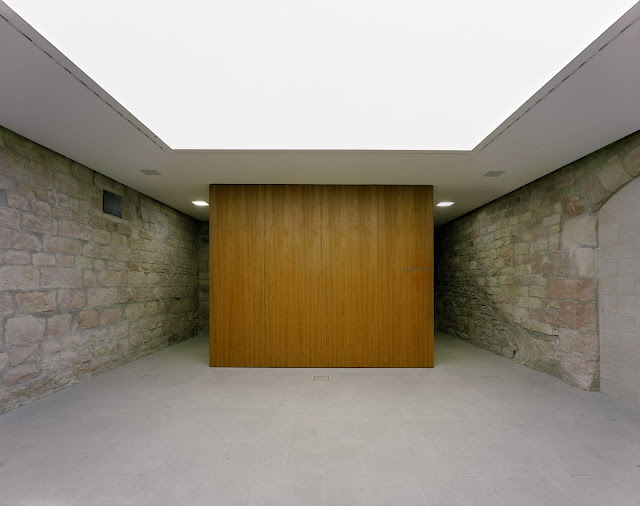 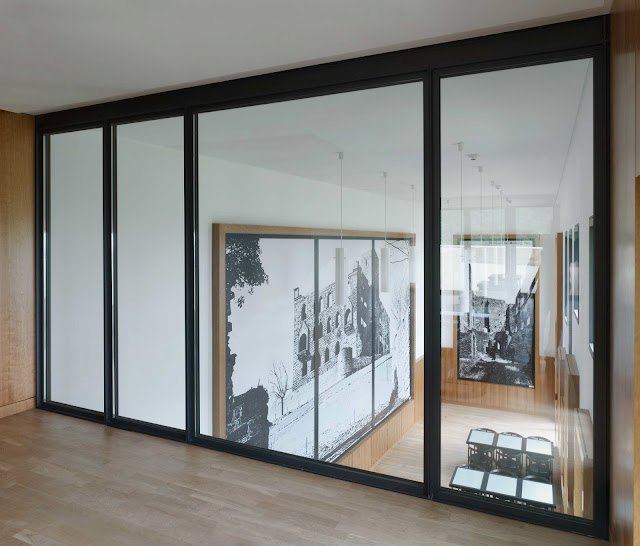 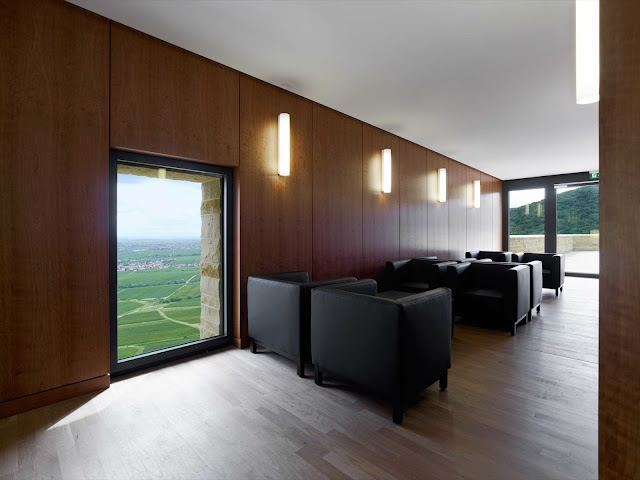 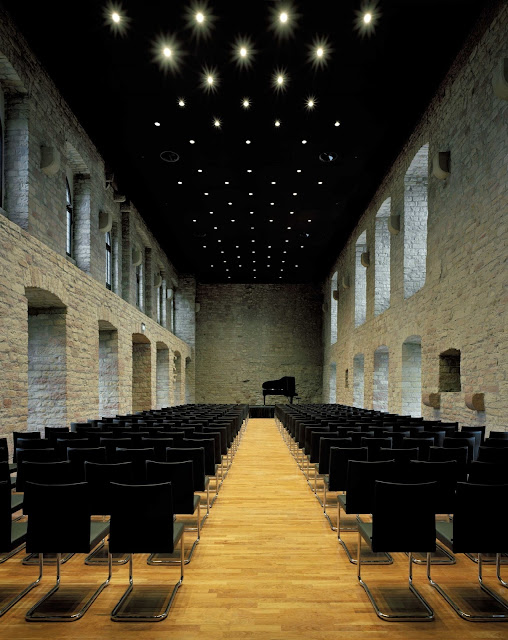 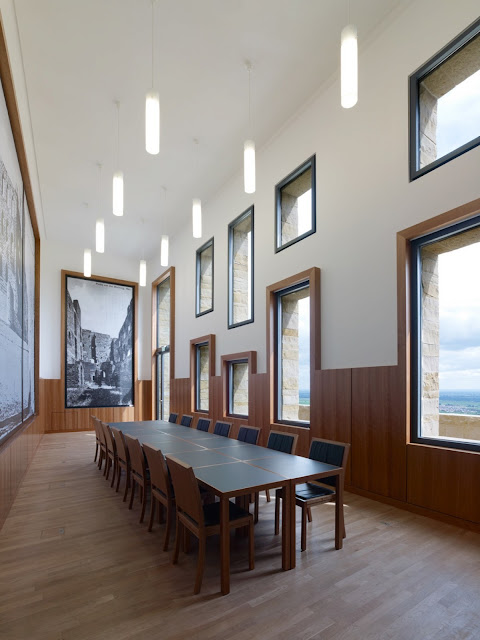 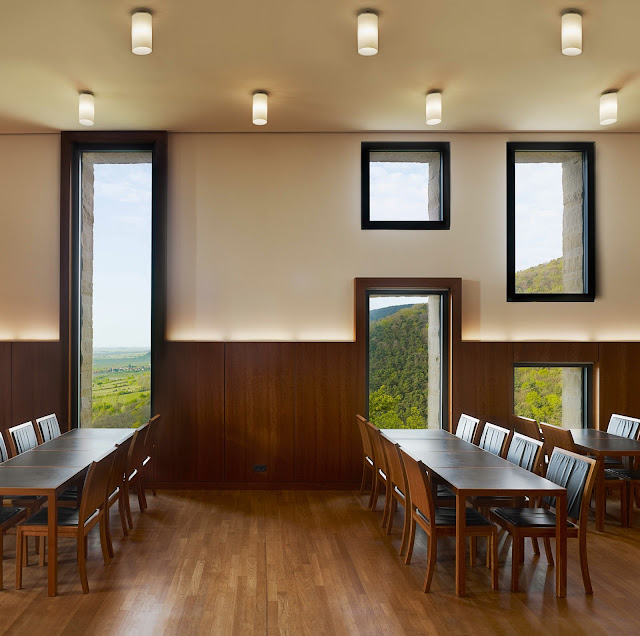 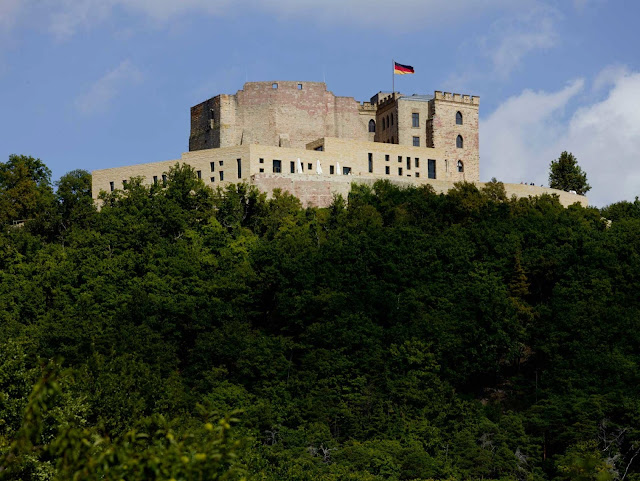 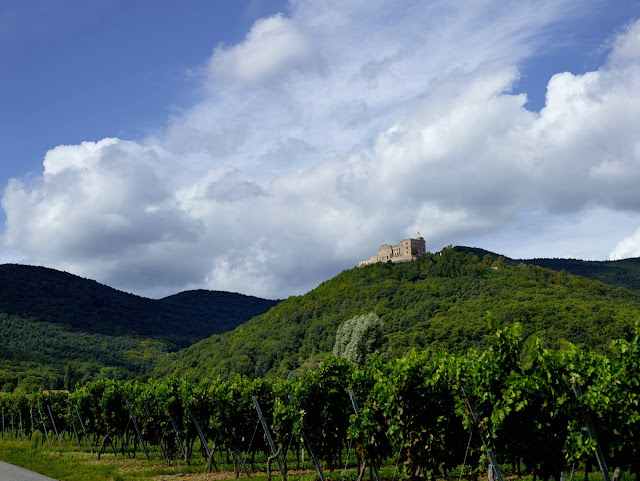 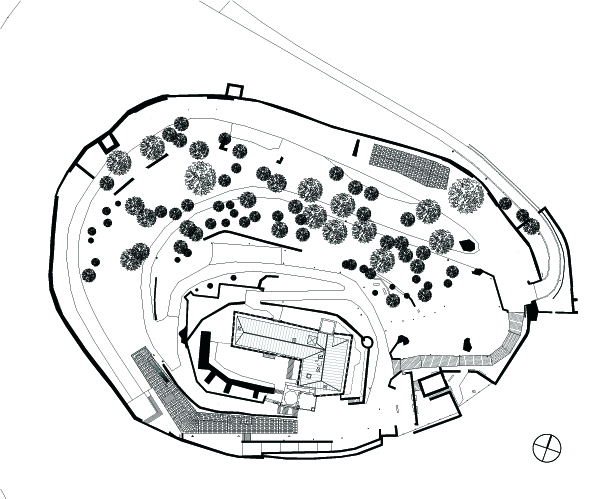 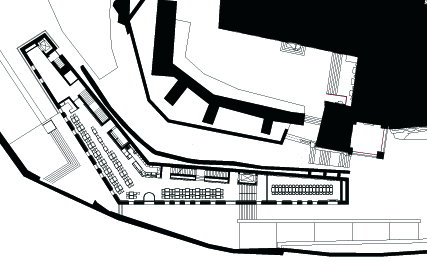 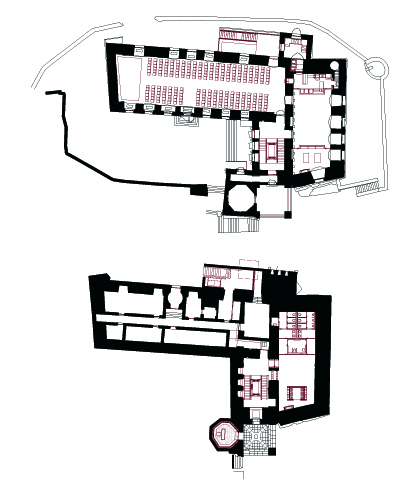