"The Burj Al Arab (Arabic: برج العرب, "Tower of the Arabs") is a luxury hotel in Dubai, United Arab Emirates managed by the Jumeirah Group and built by Said Khalil. It was designed by Tom Wright of WS Atkins PLC. At 321 metres (1,053 ft), it is the tallest building used exclusively as a hotel. However, the Rose Tower, also in Dubai, which has already topped Burj Al Arab's height, will take away this title upon its opening in April 2008. The Burj Al Arab stands on an artificial island 280 metres (919 ft) out from Jumeirah beach, and is connected to the mainland by a private curving bridge. It is an iconic structure, designed to symbolize Dubai's urban transformation and to mimic the billowing sail of a boat.

Construction of Burj Al Arab began in 1994. It was built to resemble the sail of a dhow, a type of Arabian vessel. Two "wings" spread in a V to form a vast "mast", while the space between them is enclosed in a massive atrium. Architect Tom Wright said "The client wanted a building that would become an iconic or symbolic statement for Dubai; this is very similar to Sydney with its Opera House, or Paris with the Eiffel Tower. It needed to be a building that would become synonymous with the name of the country."

The architect and engineering consultant for the project was Atkins, the UK's largest multidisciplinary consultancy. The hotel was built by South African construction contractor Murray & Roberts.The hotel cost $650 million to build.

Several features of the hotel required complex engineering feats to achieve. The hotel rests on an artificial island constructed 280 meters offshore. To secure a foundation, the builders drove 230 40-meter long concrete piles into the sand. The foundation is held in place not by bedrock, but by the friction of the sand and silt along the length of the piles. Engineers created a surface layer of large rocks, which is circled with a concrete honey-comb pattern, which serves to protect the foundation from erosion. It took three years to reclaim the land from the sea, but less than three years to construct the building itself. The building contains over 70,000 cubic meters of concrete and 9,000 tons of steel.

Burj Al Arab characterizes itself as the world's only "7-star" property, a designation considered by travel professionals to be hyperbole. All major travel guides and hotel rating systems have a 5-star maximum, which some hotels attempt to out-do by ascribing themselves "6-star" status. Yet according to the Burj Al Arab's official site, the hotel is a "5-star deluxe hotel". It is the world's tallest structure with a membrane façade and the world's tallest hotel (not including buildings with mixed use) and was the first 5-star hotel to surpass 1,000 ft (305 m) in height. Although it is characterized as the world's only 7-Star Hotel, several "7 Star" hotels are under construction. These include the Flower of the East under construction in Kish, Iran, The Centaurus Complex under construction in Islamabad, Pakistan and a complex planned for Metro Manila in the Philippines.

The building design features a steel exoskeleton wrapped around a reinforced concrete tower. Notably the building is shaped like the sail of a dhow, with two "wings" spread in a V to form a vast "mast". The space between the wings is enclosed by a Teflon-coated fibreglass sail, curving across the front of the building and creating an atrium inside. The sail is made of a material called Dyneon, spanning over 161,000 square feet (15,000 m²), consists of two layers, and is divided into twelve panels and installed vertically. The fabric is coated with DuPont Teflon to protect it from harsh desert heat, wind, and dirt; as a result, "the fabricators estimate that it will hold up for up to 50 years."

During the day, the white fabric allows a soft, milky light inside the hotel, whereas a clear glass front would produce blinding amounts of glare and a constantly increasing temperature. At night, both inside and outside, the fabric is lit by color-changing lights." 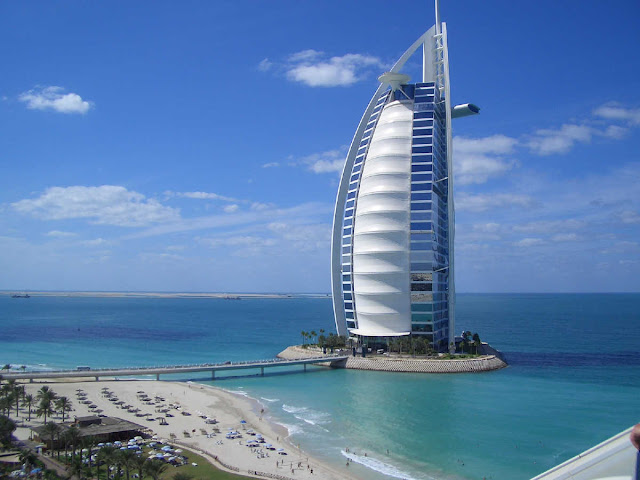 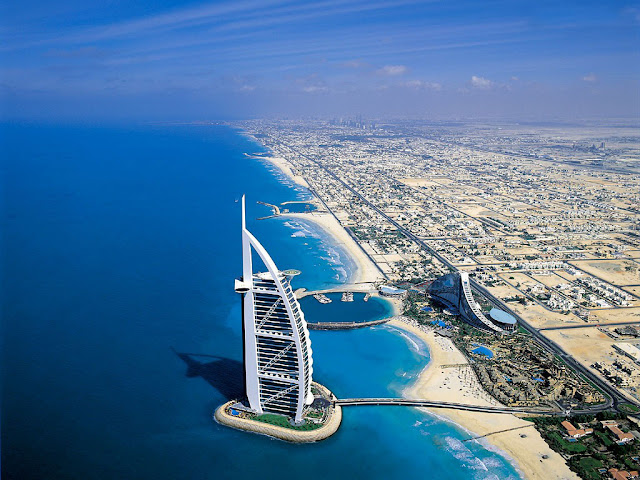 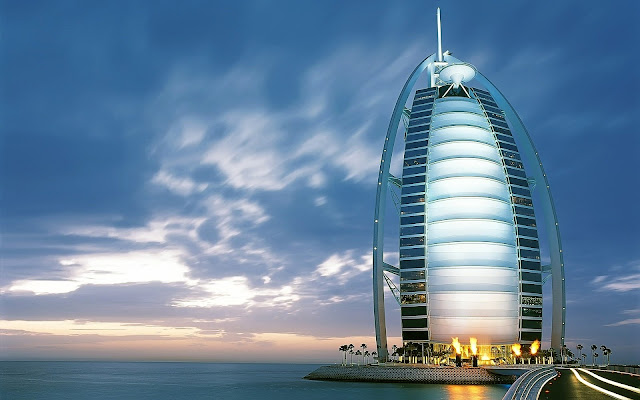 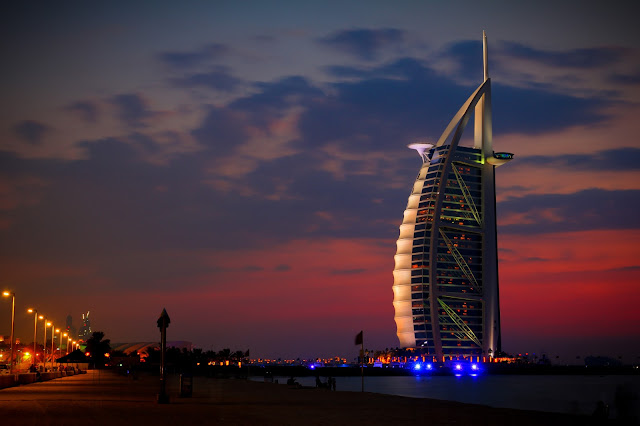 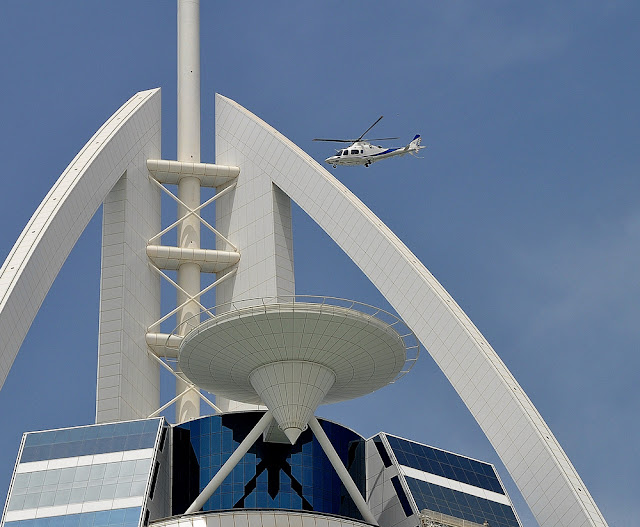 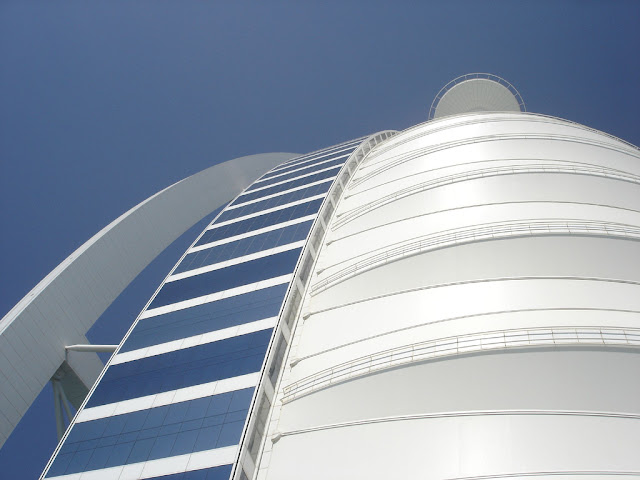 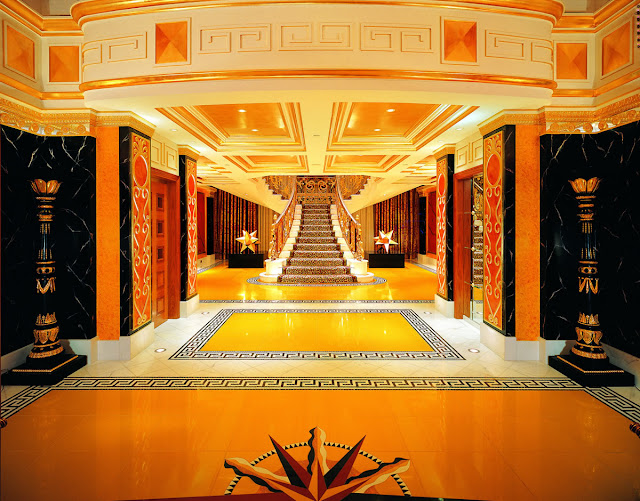 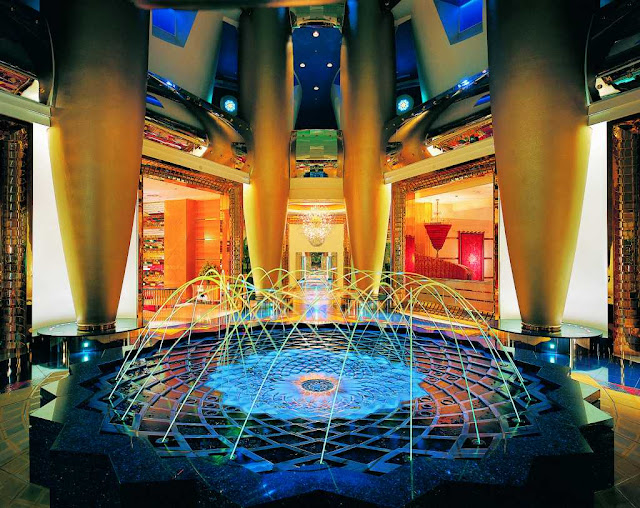 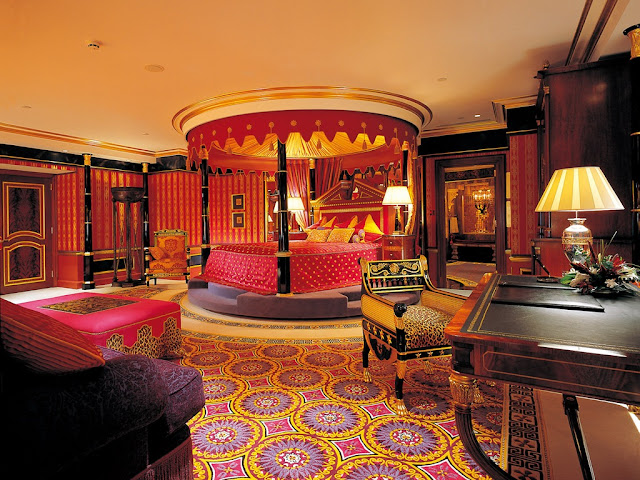 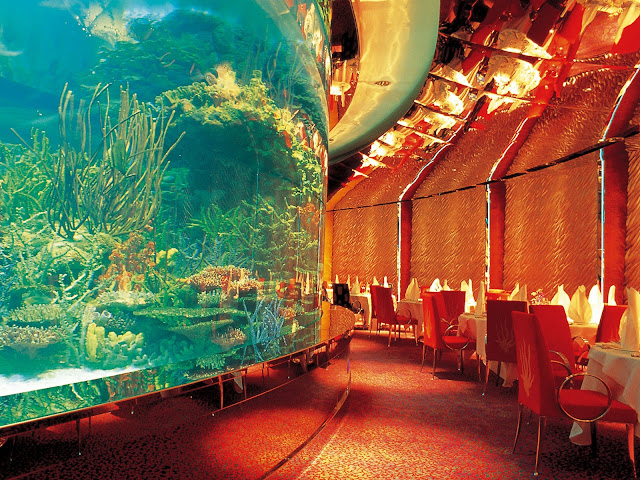 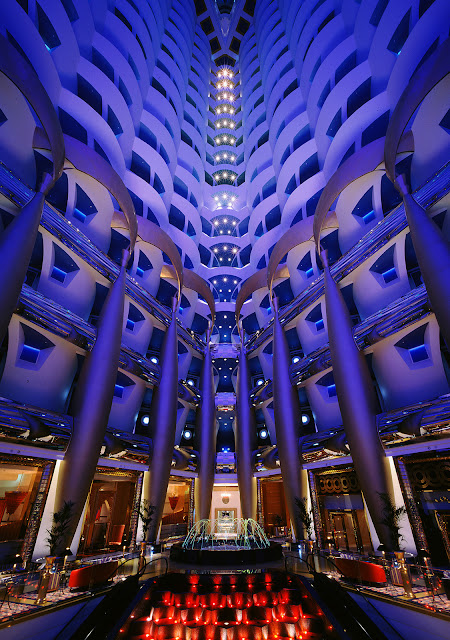 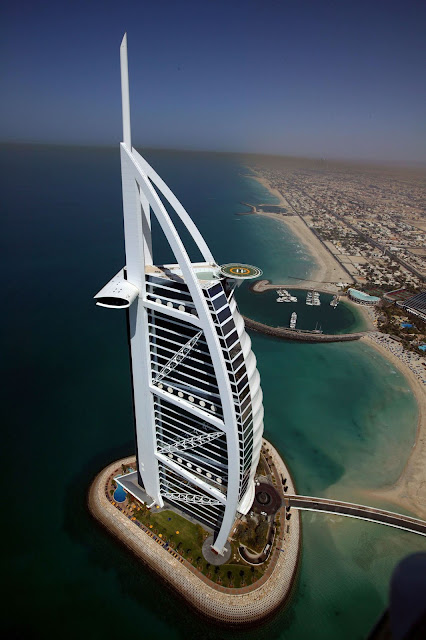 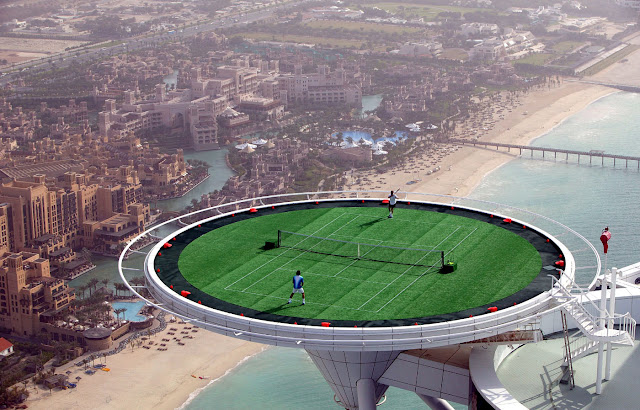