The House for Fernando Pessoa of Filipe Paixão

Filipe Paixão is a young Portuguese architect that recently won a competition organised by Opengap, which asked for architecture proposals of houses specially designed for a personality to be chosen by the competitors. Filipe Paixão proposed a house for the XX century Portuguese poet Fernando Pessoa - located in the Azores archipelago, this house gives shelter to the poet's orthonymous and to his main heteronyms, being divided by spaces that were designed for each one of these "personalities".

After seeing this project we contacted Filipe and asked if he would be interested in publishing this work on our blog. It's a great pleasure for us to be able to spread this kind of conceptual work, that complements our blog that is often more focused on built architecture. Get to know more about the life and work of Fernando Pessoa, in order to better understand the concept of this project and the characteristics of each individual space. 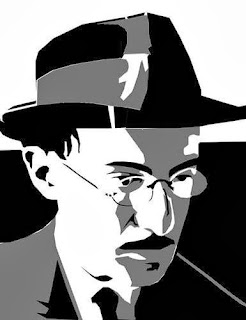 "This project, like the majority of those that I've done (whether as a collaborator in a studio or with individual authorship), came up through the participation in a contest. It is a common practice for me and most young architects by the lack of other opportunities. I found the contest and its proposal seemed interesting: a house for a character of our choice, in place of our choice. There was a great conceptual freedom – any character would be valid, and at the same time it allowed to rethink the idea of what is a house. If on one hand this freedom was exciting, on the other it was quite inhibiting in the beginning due to the lack of references, a starting point. Requiring that these references were created by us, the success in the competition depended on the degree of assertiveness and interest thereof. It took some time to consolidate the "story" I wanted to tell. The choice fell on the Lisbon poet Fernando Pessoa. I thought the duality between its orthonymous and heteronyms could be a very strong conceptual basis, besides that I knew relatively well his literary work, which facilitated the exercise. The question that followed was "where I could put Fernando Pessoa to live?". This took some time to get an answer, which varied greatly. The logic required that this place was Lisbon, where he lived throughout his entire adulthood, but there were several references in his work to other places, as well as a constant desire to get away from his daily context. In this sense, I wanted to test how it would be to actually put it (him and heteronyms) in a different context, in environments that the "master" Alberto Caeiro described in his poetry – a sort of an alternate ending from the one contained in his biography. On the island of Terceira, in Azores, it existed not only that described environment (in addition to a sense of isolation that the idea of ​​the island suggests), but also records of Pessoa visiting with some frequency members of his maternal family.

With these conceptual bases consolidated, the exercise took place in a natural way. The house develops itself in a wall of volcanic stone (such as the ones dividing the landscape of the island) that emerges from the topography and will gradually gain sufficient thickness to contain the living spaces. The wall bends over itself to create a closed garden, only open to the sky, a sort of Pessoa’s own labyrinth. The residents are distributed along the wall; Fernando Pessoa in the center, surrounded by his main heteronyms. The combination of the functions of a home, as well as the views and the quality/quantity of light, resulted in a different way for each according to their personalities. The result resembles an exercise of landart, a line that divides the landscape and transforms it. To this is added the factor of time, which acting on the stone creates a dense atmosphere, befitting the sense of exile that was intended for the character.

In the end the balance was positive, not only for the result in the contest, but for the process itself. It was something that took me marginally for about 3 months to execute. As a simple exercise, this time allowed me to mature ideas and to make all aspects of the project as assertive as possible.

As the competition is purely conceptual the project runs out at this point, it has no other continuity than to serve as learning for other future opportunities." 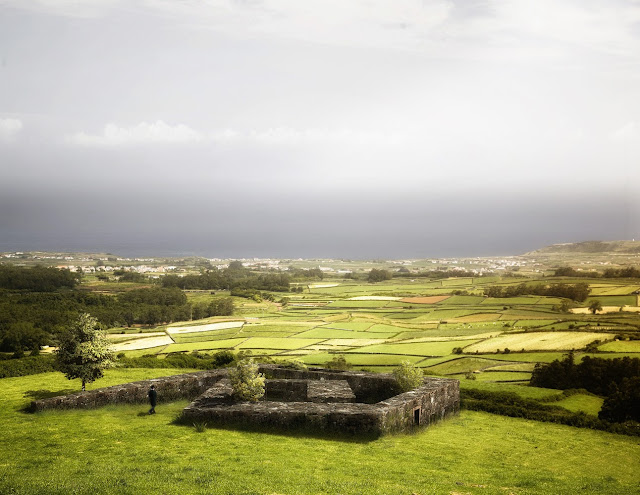 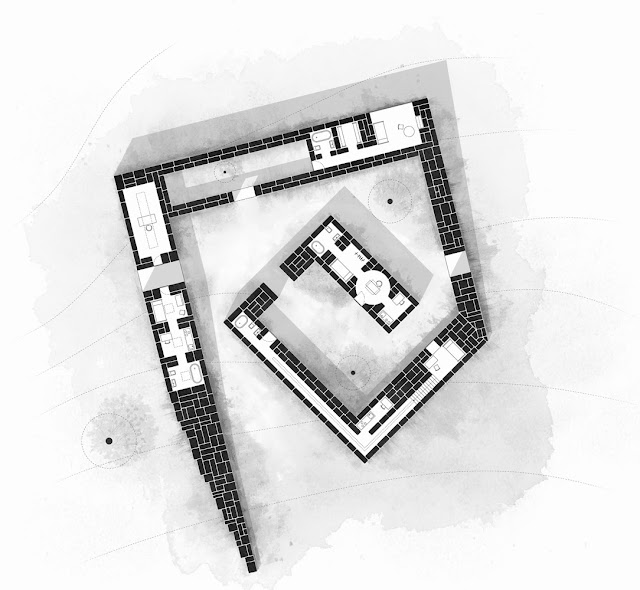